Trump Fans as Klingons? Here are Suggestions for the Other Groups on “Star Trek”

Home TV Trump Fans as Klingons? Here are Suggestions for the Other Groups on “Star Trek” 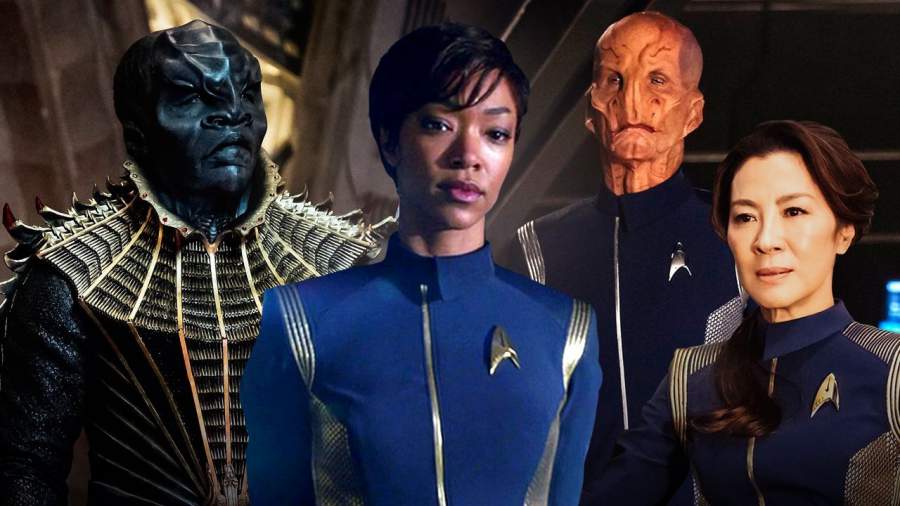 Trump Fans as Klingons? Here are Suggestions for the Other Groups on “Star Trek”

The forthcoming, 15-episode order of Star Trek: Discovery, to debut this month exclusively on the Internet-based CBS All Access, will follow a familiar Star Trek practice as the series looks to use its stories to comment on contemporary events.

Entertainment Weekly quoted the producers behind the upcoming show:

“The allegory is that we really started working on the show in earnest around the time the election was happening,” showrunner Aaron Harberts says. “The Klingons are going to help us really look at certain sides of ourselves and our country. Isolationism is a big theme. Racial purity is a big theme. The Klingons are not the enemy, but they do have a different view on things. It raises big questions: Should we let people in? Do we want to change? There’s also the question of just because you reach your hand out to someone, do they have to take it? Sometimes, they don’t want to take it. It’s been interesting to see how the times have become more of a mirror than we even thought they were going to be.”

As a Netflix-binge viewer of every live action Star Trek project so far, I hope that the producers treat the Klingons/Deplorables fairly. If they did, the show might actually have some value as political commentary. It would be the only MSM treatment of Trump supporters to handle them with any modicum of respect as fellow citizens. So I’m not holding my breath.

Still, Star Trek’s heritage gives me a little hope. The Klingons in the original series were just straightforward villains. But in Next Generation and subsequent series, the Klingons showed more depth. Commander Worf gave us a window into a culture that was rough and bloody minded. But the writers also worked hard to make that worldview coherent. They made us respect the Klingons for their willingness (at their best) to sacrifice themselves for ideals and the common good.

And I’d say it’s fair to represent as Klingons the core of Trump’s political base: nationalists and populists. They’re the kind of people who sign up for the military not just to pay off their student loans. Who serve as cops and firemen, border guards and prison guards, crossing guards and parochial school teachers. Call them “Steve Bannon voters,” not because they’d know who he is, but because he knew who they were. When almost no one else did.

It’s key to clear them of the smear that these people have any connection to “Alt-Right” race fetishists and neo-Nazis. These people are patriots, and they live and work around other Americans of every color. They don’t live in gated communities insulated from the effects of forced “diversity,” so their views on ethnic issues are blunter and less polished. At worst, some of them show the same level of tribalism that we expect from other ethnic groups. And as I’ve written here, we don’t want to see that. Now that they have equal legal rights, we want minorities to stop acting as tribalists. We don’t want see whites picking up such un-American habits.

But if we’re going to be describing Trump’s core voters in terms taken from Star Trek, fair’s fair. Let’s lay out the other major races in the Star Trek universe. Of what political groups do they remind us? A Kantian dream world without money, material shortages, warfare or ethnic conflict of any kind. Their closest equivalents on earth? The only people who seem to believe that the UN can be empowered to give each world citizen a unicorn that poops rainbows: George Soros Globalists. If you read Barack Obama’s birth certificate, it does say ‘Hawaii,’ but look in the fine print, which situates Hawaii in The United Federation of Planets. Opinion among my friends was always divided over Counselor Troy on Next Generation. Critics noted how insufferable it was to hear her maunder over the “strong, strong feelings” she sensed from entities on neighboring starships. Fans countered that actress Marina Sirtis was so hot that it didn’t matter if she was reciting the phone book. But I think that all can agree who represents her race on earth: Bernie Sanders socialists, who feel everyone’s pain — from frustrated transgender immigrants to the screams of tortured Gaia. And those nice folks from the government can make sure that you feel it too. 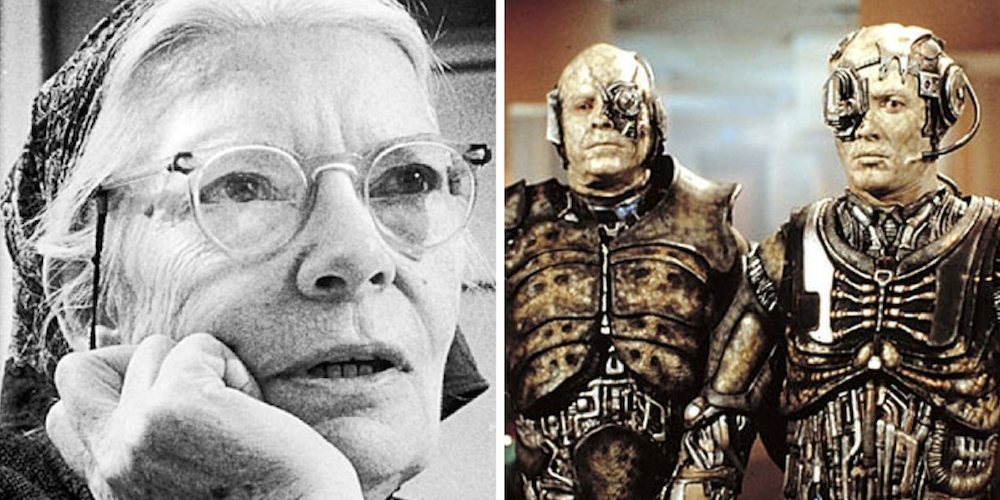 Let’s avoid easy targets like North Korea. Its poor, hunted citizens have no choice but to beg the Maximum Leader for better weather. The closest analogue on earth to hive mind cyborgs? The Christian Left. No one else pulls off that blend of dourness, groupthink and smug self-confidence. No one else is that exact same shade of veal white. Every time I see Dorothy Day’s scowling face, I hear in my head, “You will be assimilated.” No, not libertarians. I’m sure that the Ferengi’s Laws of Acquisition forbid things like “spending hundreds of profitless hours debating the State’s monopoly of force.”

Combine the rank opportunism, crony capitalism, chest-thumping and rank cowardice of the Ferengi, and there’s just one group that qualifies: Establishment Republicans. Jeb Bush might not be presidential material, but I’d back him for Grand Nagus anytime. 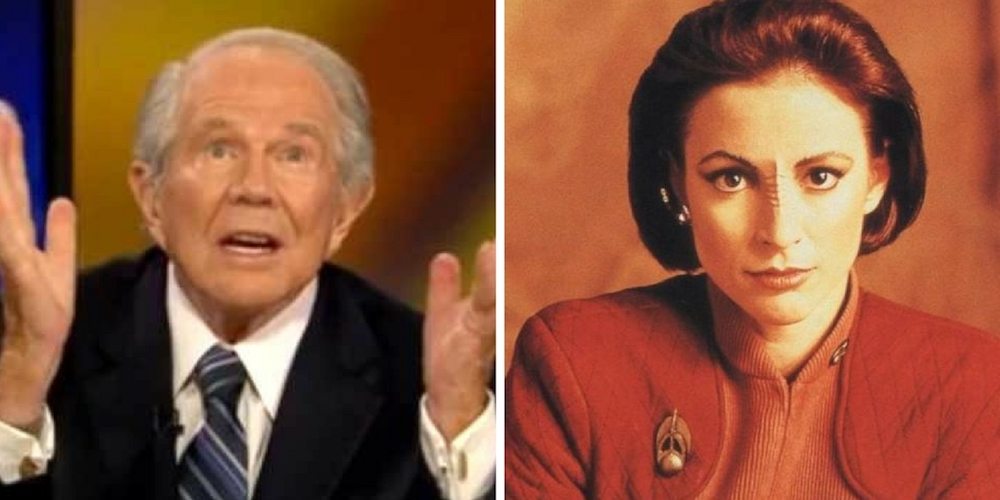 This quirky race combines effortless comfort with high-tech inventions, and abiding faith in ancient texts and traditions. It finds its gods ready to hand, trusting them and talking to them. Bajorans can pilot interstellar vehicles, but still keep faith that the Prophets have a plan. Hands down: They’re the Christian Right. Haughty, imperious, and scheming. Thin-skinned and power-hungry. Full of high-flown talk that boils down to a Prada boot crushing a human face, forever.

This race came to earth all right. It’s the Clintons and their acolytes. Here’s where libertarians, especially of the Ayn Rand variety, make their way through the stars. No other celestial species has the brain capacity for, or the interest in, crafting a social science like “Praxiology.” That calculates what people will do as they try to maximize their self-interest. Instead of going hog-wild once every seven years as Vulcans do, our earthly tribe scores some reefer and goes to a Renaissance Faire. Mating activity is still comparatively rare, however. Insufferably self-satisfied. All-knowing. With limitless resources. Yet he still manages to get outwitted and lose every time. On earth our Q has a name. It’s Mitt Romney.