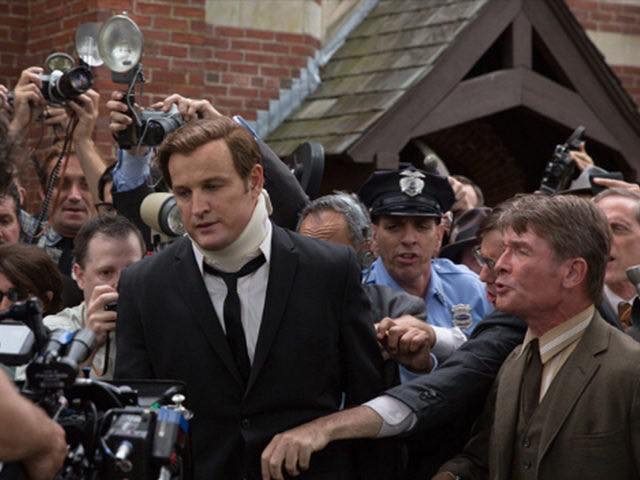 Chappaquiddick is the tragic story of Mary Jo Kopechne’s death in 1969 near Martha’s Vineyard in Massachusetts. After a party with Kennedy campaign workers, Mary Jo accepted a ride from Senator Ted Kennedy. He accidentally drove his car off the one-lane bridge and into a tidal channel, where it sank. Ted escaped, Mary Jo was trapped in his Oldsmobile, Ted got home and then waited 10 hours to call for help.

Mary Jo had campaigned for Bobby Kennedy, she totally believed in his political mission and she deeply grieved his death. As the filmmakers explain it, the party guests on that tragic night had gathered to celebrate the women who worked on his campaign, celebrate Bobby’s life, celebrate the Kennedys’ politics and Ted too.

Why Chappaquiddick? Writers Taylor Allen and Andrew Logan are fans of the Kennedy family and political movies. The indie filmmakers met in Austin, Texas, and they’d written other “unsuccessful” screenplays.

In their interview with Edward Douglas of The Tracking Board, Taylor revealed: “For us, JFK and Bobby were both figures that were so large and sort of hard to understand, because they were president and attorney general, and Ted, being the youngest, and the one that didn’t have all these expectations on him until his brothers were assassinated, that somehow made him more relatable to us, and that was why we went into it, knowing that we wanted to tell a Ted Kennedy story, and then once you decide you want to tell a Ted Kennedy story, all roads lead back to Chappaquiddick. If you don’t want to tell a cradle-to-grave story, you really want to focus it, and we thought that Chappaquiddick was one of the larger themes of his life.”

The facts are so shocking it seems they had to ward off potential lawsuits. Basically Taylor explained they wrote the screenplay as journalists. He said: “Yeah, we were able to have the inquest by our side and point to everything that was truth. Truth is stranger than fiction. I actually will tell you that [director] John [Curran] had all but signed on the dotted line when we met him, and it was very clear to me that had we made up a lot of stuff, he was going to walk immediately. Fortunately, the truth will always set you free, and we had not only told the truth to John but told the truth on the page, and that helped.”

Jason Clarke, who plays Senator Ted Kennedy in Chappaquiddick, has done several interviews about his shock at the senator’s neglect, and the Kennedy aides and media who collaborated in the cover-up. Even though he admires Ted’s politics, he told Deadline that he’s “chilled” by the senator’s behavior.

“I don’t understand why it’s not taught more, why more people don’t know about it. I think the first time you watch, the facts are shocking and it’s a constricting feeling. Like, my God, this can’t be true, can it? The second time around, a lot of people have a much more emotional response, like, how can people not know about this?” said Clarke.

As shown in the movie photo above, Ted Kennedy faked injury by wearing a neckbrace.

So, essentially the liberal Clarke is delving deeper into the politics of Democrats such as Hillary Clinton because he’s looking for integrity.

One of the movie’s executive producers is Byron Allen, former standup comic and comedy writer for “Late Night with David Letterman,” among many other credits.

Last September, his company Entertainment Studios acquired the North American rights and made a $20 million commitment to the film, including $4 million for the movie rights and $16 million in P&A “an individual close to the production told TheWrap.”

Allen told Variety that “powerful people” pressured him to drop the project. Evidently, he didn’t flinch.

Here John Curran and Jason Clarke talk about the history, meeting Ted Kennedy, other real people essential to the story, and their love for witty and feisty Bruce Dern.