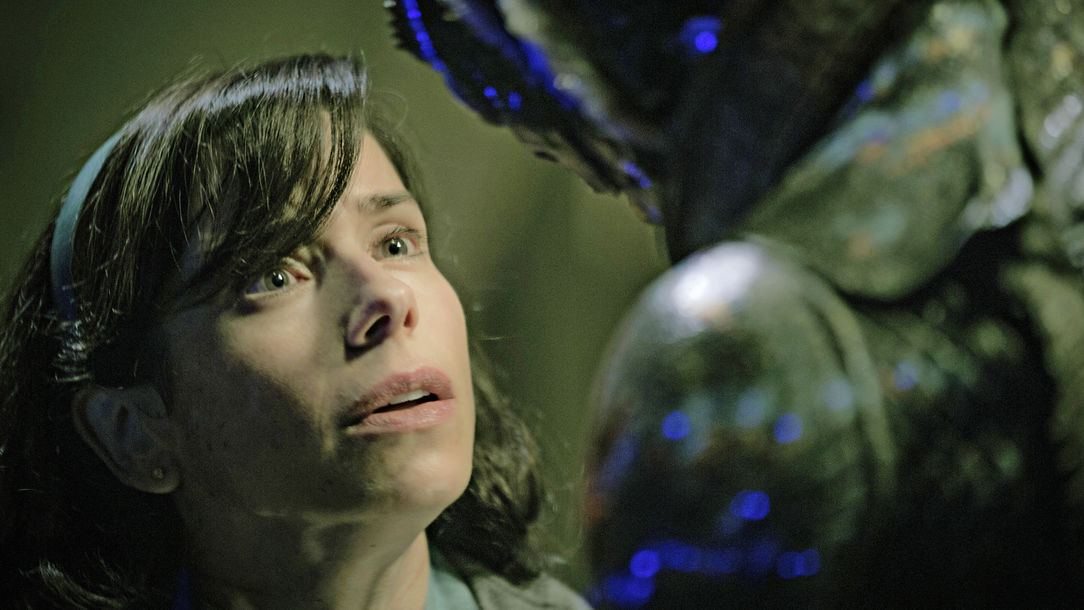 For all its beauty and feel-good ending, Guillermo del Toro’s fantasy romance The Shape of Water remains formulaic and kind of silly. You have to be as talented as del Toro is to pull this one off — and pull it off he does in the end.

It seems that the director is enamored of the fairy tale, and so here he serves up a beautifully shot exemplum.

Down by the seaside kingdom of 1950s Baltimore, the mute Elisa Esposito (Sally Hawkins) lives above an old cinema and works as a cleaning woman in a high security government building. A creature from the Black Lagoon (well, from the Amazon jungle, actually) played by Doug Jones has been caught and brought in to the lab: Is he a mere amphibian, a freak, part human, or perhaps even a god?

Elisa slowly falls in love with the creature and brings him hard boiled eggs each day, through which he soon learns to love her as well. But their time is limited: The Russians also want to capture the creature and the U.S. government, led by the evil and wonderfully acted Richard Strickland played by Michael Shannon, wants to vivisect him/it and throw him in the trash.

Hawking is wonderful as Elisa and she harkens back to the days of silent film stars. Her best friend and colleague Zelda (Olivia Fuller), a wisecracking African American woman, is hilarious throughout. In fact, all the acting is altogether superior, including Michael Stuhlbarg as Dr. Robert Hoffstetler, a kind of Russian double agent who may kill the beast to spare him vivisection, and Richard Jenkins as Giles, the gay best friend.

But there are snags to the storytelling.

In one scene, Elisa and Giles travel by bus to a pie shop where the young blond waiter that Giles has a crush on turns out to be a homophobe and a racist. Is this type of social commentary really relevant to the script?

The scenes are interspersed throughout with Twentieth Century Fox musical numbers — at one point Elisa comes off the screen and begins to dance one in black and white — all fine and well, but we’ve seen this before. And the inevitable love scene between Elisa and the creature strains credulity.

There is also the matter of the rampant stereotyping, even if some of it comes in one-liners: the cruel white government agent is a straight white guy; the pathetic outcast is gay; the best friend is an African-American woman; her husband is a lazy black man; Giles is at once self-pitying yet vain. Then there are the clever Israelis and the conniving Russians. True, fairy tales have stock characters as trade, but it all adds up to a bit too much — even mildly offensive at times to our intelligence.

I am reluctant to reveal any more of the plot than necessary, even if none of it is truly surprising. At the end Elisa and the creature reunite — where they are headed is unclear. Atlantis?

The most remarkable thing about this film is the sets and the 1950s retro camp, as well as del Toro’s ability to mix horror and humor in the most unlikely ways — starting with the hard boiled eggs, and — why not? Elisa herself, who is for all intents and purposes is a very successful spoof of the outsider/helpless damsel (with quite a backbone, it turns out).

You get to cheer at the end, and you feel as if you’ve enjoyed a quite wonderful if bizarre fairy tale. So, all in all, kudos to del Toro and his team for a film that would have fallen entirely flat in lesser hands.

January 23 update: The Shape of Water is nominated for 13 Oscars and still showing in U.S. movie theaters.