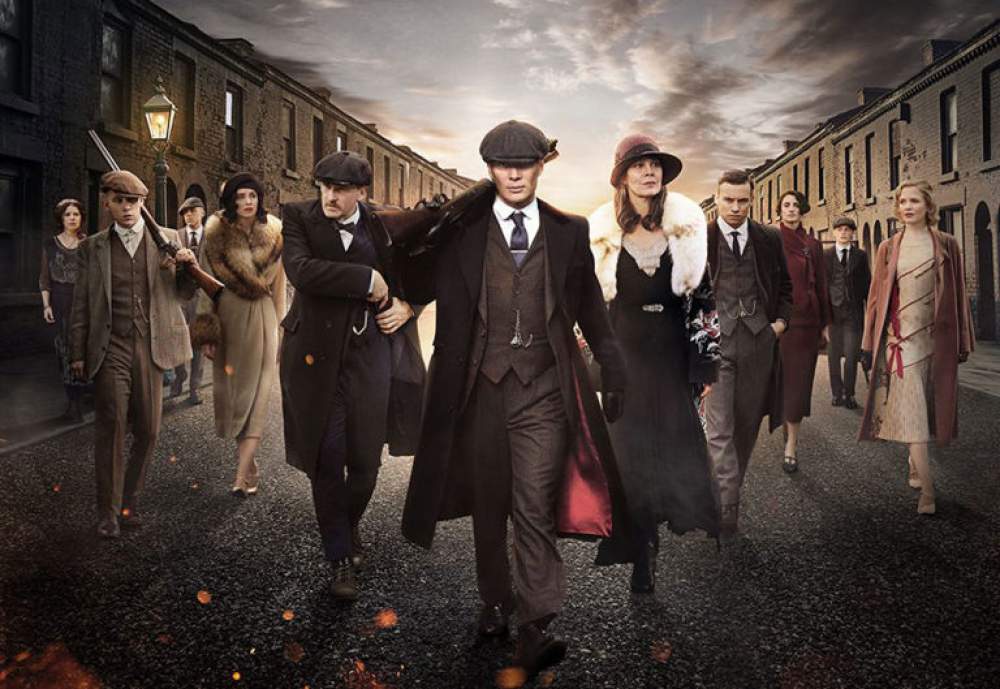 So I just finished devouring Season 4 of Peaky Blinders. And I’m hungry for more. First the obvious pleasures: An exquisite recreation of a particular time and place — then within it a subculture I’d never known existed: working/criminal class Irishmen in Birmingham, England, intermarried with gypsies, and in competition and conflict with Jewish and Italian fellow gangsters. (Tom Hardy is better than ever, if almost unrecognizable, as the gnomically wise and brutal leader of the local Jewish mob.)

The visuals are wonderful. In this period, festively painted Roma caravans pulled by massive, beautiful horses competed on the roads with gleaming Bentleys. New Art Deco furnishings pop up inside massive Victorian buildings. The gaslights are being replaced, one by one, with electricity. And old ways of life are fighting to hold on against the new.

In the first and second seasons, that conflict centered on the Irish against the British. Tommy Shelby (played by Cillian Murphy, who seems incapable of a false note in his acting) is one of the thousands of Irishmen in the British Isles who fought bravely for King and Country in World War I. Years of soul-crushing combat in that meat-grinder for people has burned out his ideals. He comes back with family members and fellow veterans determined to transform his life—by seizing control first of his neighborhood, then of the underworld through all of Birmingham. His antagonist (played by the unflappable Sam Neill) is an apparently upright, vindictive Ulster policeman sent to root out local crime. Underneath the fight between law and order is an ancient tribal feud between Anglos and Celts—which is playing out across the Irish Sea in the form of the Irish Civil War.

Tommy takes over leadership of his clan from his brave but rather dim-witted older brother, Arthur (Paul Anderson), who gradually has to make the humiliating admission that he’s not the brains of the operation. Competing with Tommy is his world-weary, sometimes Catholic and sometimes Spiritualist aunt Polly (Helen McCrory). It’s wonderful to watch her wield power and influence in this violent male world—a reminder that long before feminism, women held leadership roles behind the scenes.

The best pop culture comparison for the rise of Thomas Shelby is the early career of Vito Andolini (Robert DeNiro) in Godfather II, who moves from hunted orphan to neighborhood punk, until he amasses power as Don Corleone. Peaky Blinders compares quite well to that Coppola saga. It’s just that good.

The next challenges that the Shelby clan confront plunges them into the tangled politics of that period—when Bolsheviks in Russia still seemed from afar a beacon of hope to beaten-down workers. Unaware (or unwilling to know) of the butcheries Lenin imposed from the very beginning, British workers flocked to local Communist parties. At the same time, Winston Churchill, fresh from his disgrace over Gallipoli, is using secret agents to disrupt Communist cells, and aid White Russians trying to beat back the Bolshevik armies. Tommy Shelby gets draw into the conflict, and hobnobs in back room meetings with depraved tsarist exiles. He jumps back and forth between the outer verges of high society and the blood-soaked reeking ghetto that’s the source of his strength—always deeply loyal to the people and place where he came from.

Season 4 shows the Shelbys rich and fat, but still not happy. They’re facing the payback for those whom they rolled over in their past rush to power: A clan of Italian gangsters now linked to the steely, professional Italian Mafia, with links both to Naples and to Brooklyn. Luca Changretta (played by Adrian Brody sounding a little too much like Marlon Brando) seeks vengeance for Tommy’s murder of his father. A full-on vendetta rages in the muddy streets of Birmingham, and reaches into the glittering country houses which the Shelbys have bought themselves. Meanwhile the whole of England is on the brink of revolution, as Soviet gold flows into local Communist Party cells. These control all the major labor unions, and bring on a general strike in the hope of toppling the government. They came within striking distance, too few recall. The only other film depiction I’ve seen of that critical moment in interwar history was a comic sequence in Waugh’s Brideshead Revisited (the classic Grenada miniseries, not the forgettable feature film). That general strike deserves a more full on depiction, I think—though I fear that if it’s made, it will be by those who wish it had succeeded, that Britain in the 20s had become the puppet of Stalin’s Party.

Through it all, Tommy Shelby manages to outplan and out-persuade his enemies. When cornered, he can be absolutely ruthless, but he’s not out for himself. For him this struggle is personal, not business. Love for his wild, reckless but lovable family is really what drives him. He’s not the burned-out postwar nihilist he pretends to be. That’s what keeps him interesting.

One private note: I’m half Irish and that was the dominant culture of my family. I watched Peaky Blinders with my very Germanic girlfriend and it offered her epiphanies. “I never really understood you before,” she said after watching this series depicting Irish criminals. “But now I think I do.”