Home Feature ‘I, Tonya’ Suffers Like Its Subject from Abuse 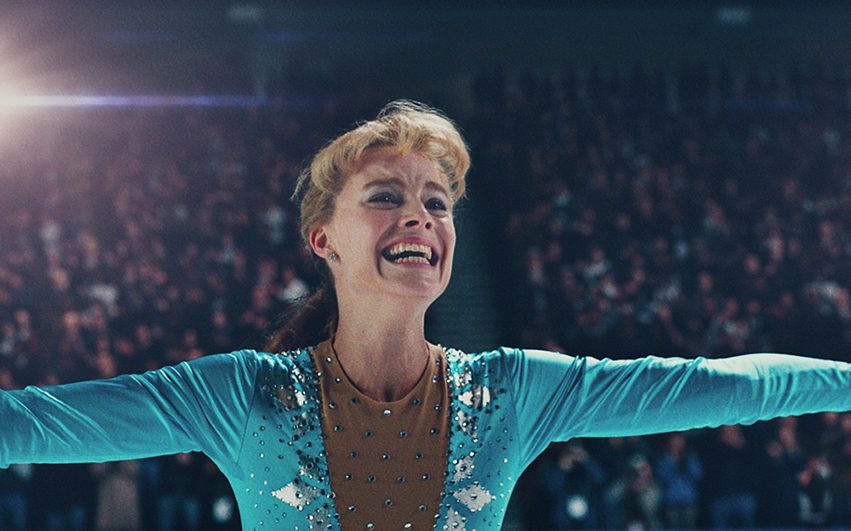 I, Tonya is riveting for the first 20 or so minutes when we first get an inside view into the sad and abusive childhood of the gifted skater Tonya Harding.

For those who do not recall the real-life backstory, Harding was one of the top-ranked women skaters in the world in the early 1990s. She was the first American woman to complete a triple Axle in competition.

Harding is most readily remembered, however, for her role in one of the biggest sports scandals in recent history: the violent attack on  her arch-rival Nancy Kerrigan before the 1994 Nationals. The attacker clubbed Kerrigan in the knees. Screaming in pain, she fell to the ground and began tearfully moaning out the preeminent question, “Why?”

Harding (Margot Robbie) spends much of her time in this film—well directed by Craig Gillespie—being bashed around or abused in one way or another by just about everyone she encounters. Allison Janney as Harding’s abusive white trash mother makes her hold in her pee until she goes all over the ice in public and lambasts her every chance she gets. Later on her boyfriend and then husband Jeff Gilloly (Sebastian Stan) smacks her around as if she were a rag doll.

Still, the film’s main thesis—that Harding was a good soul who simply got abused by everyone along the way—is a bit hard to swallow. In the end, it seems as if Harding had almost nothing to do with the attack on Kerrigan itself, but that it was masterminded and executed by Gillooly and his henchmen. Whether that’s true remains in doubt. Harding did plead guilty to conspiring to hinder prosecution of the perpetrators.

Some other things remain puzzling: the use of humor in a scene where Gilllloly smacks Harding’s face against a wall: she returns smiling with a shot gun… And then there’s Harding’s seeming inability to listen to absolutely anything that her coaches or the judges tell her about her presentation.

Harding was always robust and athletic, not dainty or “feminine” like her competitors. In one touching scene, a judge tells her in private, “It was never about your skating.” He goes on to elaborate that she is just not the image the USA wanted to portray in international competition.

Figure skating has always been notoriously rigid in its interpretation of gender and how men and women should project on the ice—Johnny Weir, one of the most graceful male skaters of late was seen as too feminine (read: gay) by Eastern European judges and Surya Bonaly, the French champion suffered from her outsized athleticism and the fact that she was black. These are important issues that the film raises. It’s also interesting to note how many people—including myself—remembered the 1994 incident as one in which Harding herself attacked Kerrigan: partly because the press reviled her to an utterly preposterous degree, again for reasons having to do with class and gender.

After a while we do become tired of seeing Harding thrown around helplessly, and the section of the film having to do with the attack itself drags on. Well acted all-around, Allison Janney may snag an Oscar nomination for her portrayal of a mother whom life has treated so badly it seems, that she can’t help but take it out on those around her.

In the end I, Tonya feels more like a made-for-TV movie than a feature. Told as it is from multiple perspectives (the viewer gets to interpret the “truth”), it sheds important light on the first great 24-hour media scandal and two great athletes who inevitably became pitted one against the other, a harbinger of things to come.

Christopher Atamian is a writer and director living in New York City. He produced the OBIE Award-winning play “Trouble in Paradise” in 2006, and has directed several music videos and short films. Christopher contributes critical pieces to publications such as The New York Times Book Review, Huffington Post, and SCENES Media while working on other creative endeavors in film and theater. His latest book, “A Poet in Washington Heights,” won the 2017 Tölölyan Literary Prize.