“Stranger Things:” A Dystopia with Friendship and Hope 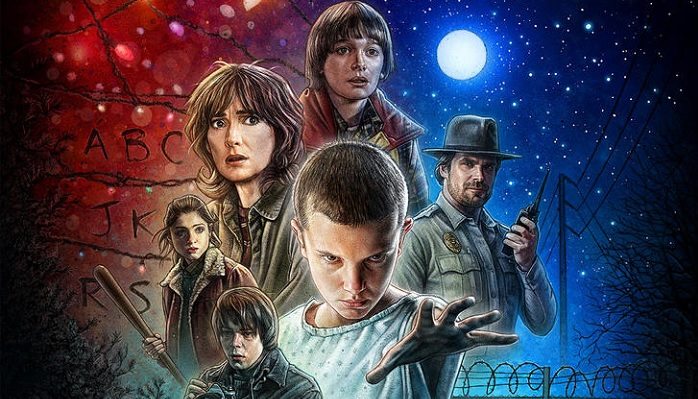 “Stranger Things:” A Dystopia with Friendship and Hope

Past ages, and the institutional powers of other ages – spiritual and temporal – were much less tolerant of free interpretations of influential texts in our culture. Our freedoms now are more respected.

However, as one cultural critic (Michel de Certeau) has observed,

Today, it is the socio-political mechanisms of the schools, the press or television that isolate the text controlled by the teacher or the producer from its readers. But behind the theatrical décor of this new orthodoxy is hidden (as in earlier ages) the silent, transgressive, ironic or poetic activity of readers (or television viewers) who maintain their reserve in private and without the knowledge of the masters.

It is with this freedom, and in this spirit, that I have watched and been enthralled by Matt and Ross Duffer‘s runaway Netflix success, Stranger Things. (Spoilers ahead.)

What we read, hear and see in the artifacts of our civilization depends not only on the genius of the creators of those artifacts. It is also often determined by our own experiences and by the power, character and developed state of our own creative imaginations.

What Alice in Wonderland, Animal Farm or Lord of the Rings says to us is not only what their authors’ intended to say but it may also be elaborated and enriched for us by what our own thoughts, sensibilities and experience of life bring to the creative table.

Stranger Things is, I think, one of those creations which is giving us much more to think about than we realize. Before you shout your outrage, be assured that I am not – yet – bracketing this contribution to popular culture among the great artifacts of our civilization. It has its flaws but it also has its great moments.

After the first series of Stranger Things was streamed on Netflix last year, the Duffer brothers, its creators, had a conversation with Dawn Bonker, a senior writer on the website of their alma mater, Chapman University.

It’s about much more, they say, than the story of a small town turned on a tilt when a young boy named Will disappears, a strange little girl (Millie Bobby Brown) arrives and a paranormal mystery unfolds. Tantalizingly, and disappointingly, Bonker does not explore what that “much more” might be – with the exception of an observation by Ross that the story is about friendship.

As the plot unfolds the boys teach the little girl, called “Eleven” – because all they know about her is that she has 11 branded on her wrist – how to be a friend, how to trust people, and that “friends never tell each other lies”. The truly sinister and deeper layer of meaning of the story centers on the origin and treatment of this little girl and her mother. Their persecutors are the genetic and mind-bending scientists at work in the government laboratory on the edge of the town. “Eleven” has been raised in this laboratory, manipulated and physically abused. The boys she stumbles across when she escapes from her murdering manipulators help her on the road back to normal humanity.

Ross: There’s something so innocent and sweet about how central friendship is to them. When you really boil it down, that’s what really matters. It’s those very simple life lessons – being a good friend can go a long way.

Matt: On television there’s been this huge avalanche of shows with antiheroes. A lot of our characters are goodhearted people. And they have a lot of compassion.

Bonker asks, was that your universal truth, or a theme you were trying to convey?

Ross: I hope so.… Even when there’s darkness, people leave the show feeling a bit of hope there.… It’s about these friends that are there for each other no matter what, that there’s this mom (Winona Ryder) that’s there for her son no matter what. And to us there’s something both universal, and hopeful, about that.… That’s where we wanted to go.

Yes, but I think they go much farther than that. The darkness he talks about is really dark. Indeed it is as dark as the hell of Paradise Lost or the land of Mordor. This is the “upside-down world” of the plot, intimately and terrifyingly known to “Eleven” and into which characters stray and in which some lose their lives, others lose their minds and which throughout the series encroaches on the real world. Its hidden forces are seeking to infiltrate and possess our world for their own grotesque and malign purposes.

On the surface these are natural forces manipulated by humans. Netflix, not quite accurately in its promotional material, speaks of supernatural powers. But in fact what we are shown is the work of vile  power-hungry people and their mal-functioning experiments. The preternatural evil may emanate from the Father of Lies but, if it does, it happens like most of the evil in the world – through the medium of mankind.

Back in the 1950s we had the Red Scare. This in its turn spawned the monster of McCarthyism. We look back on that now and see it all as so much paranoia. But as the old joke goes, just because I’m paranoid doesn’t mean they are not out to get me. McCarthyism revolted us and was essentially an instrument as capable of perpetrating injustice as what it railed against.

More effective antidotes of the age were the fables and fictions which countered the threat – ranging from those of Orwell, Huxley and others, to the productions of Hollywood’s own fable-factory – like Invasion of the Body Snatchers (1956), described as one of the greatest science-fiction films of all time. The original version (there have been several remakes) captures better than any other film the fears of that era.

So, if the Duffer Brothers are warning us about a threat to our civilization wrapped up in a piece of ‘eighties nostalgia with echoes of E.T. and The Goonies, what might it be? I can’t say what it is for them, but I know what it is for me.

There are two strands of evil at work in the US Department of Energy’s Hawkins National Laboratory. In what way they are connected or were originally connected is not clear. It does not matter. One has resulted, through the manipulation of mothers and their children, in the development of human beings with super powers which the super State clearly intends to use for its own ends.

The other has resulted in the creation of a super virus which controls carnivorous dog-like monsters and which can also take possession of humans. The scientists in HNL have lost control of the virus and now it is threatening to overrun the planet, leaving us with an “upside-down world” as terrifying as anything Cormac McCarthy laid out before us in The Road.

The dystopia of Stranger Things may be read as a metaphor for many things: a world wrecked by man-made climate change; a world destroyed by the genetic manipulation of our food supply; a world mirroring that in which Planned Parenthood trades the body parts of human babies it aborts “for the good of humanity”. Take your pick.

It may also be a warning that the nonsense of gender ideology and the attempted manipulation of our biological selves is destroying the very essence of our humanity. This is, for me, the most compelling interpretation and seems to be underlined by the fight-back of two of the characters who are among HNL’s victims – Eleven and her sister – as well as the mother who fights for the body and soul of Will who has been possessed by the virus to end all viruses.

That interpretation seems to be further supported by the juxtaposition of the murdering evil men and women of HNL with the semi-innocent adults and the wholly innocent dungeons and dragons besotted twelve-year-old kids of a sleepy Midwest town.

They can be compared with the gullible victims of transgender activism whom we could read about recently in the British press – individuals who are seeking reversals of surgical mutilation by professionals in the grip of a political ideology. Echoes from Stranger Things are loud and clear.

I haven’t seen anything yet about a third series of Stranger Things coming down the tracks. The Duffer Brothers ended series two… Well, I had better not say anything. But there seemed to be a nod to something ominous, suggesting that the “upside-down world” hadn’t gone away.

Michael Kirke writes from Ireland, and blogs at Garvan Hill, where the original version of this article can be read. It appeared at Mercatornet.com, and is reprinted by permission.