Four Frightful Films To Help Ring In The New Year 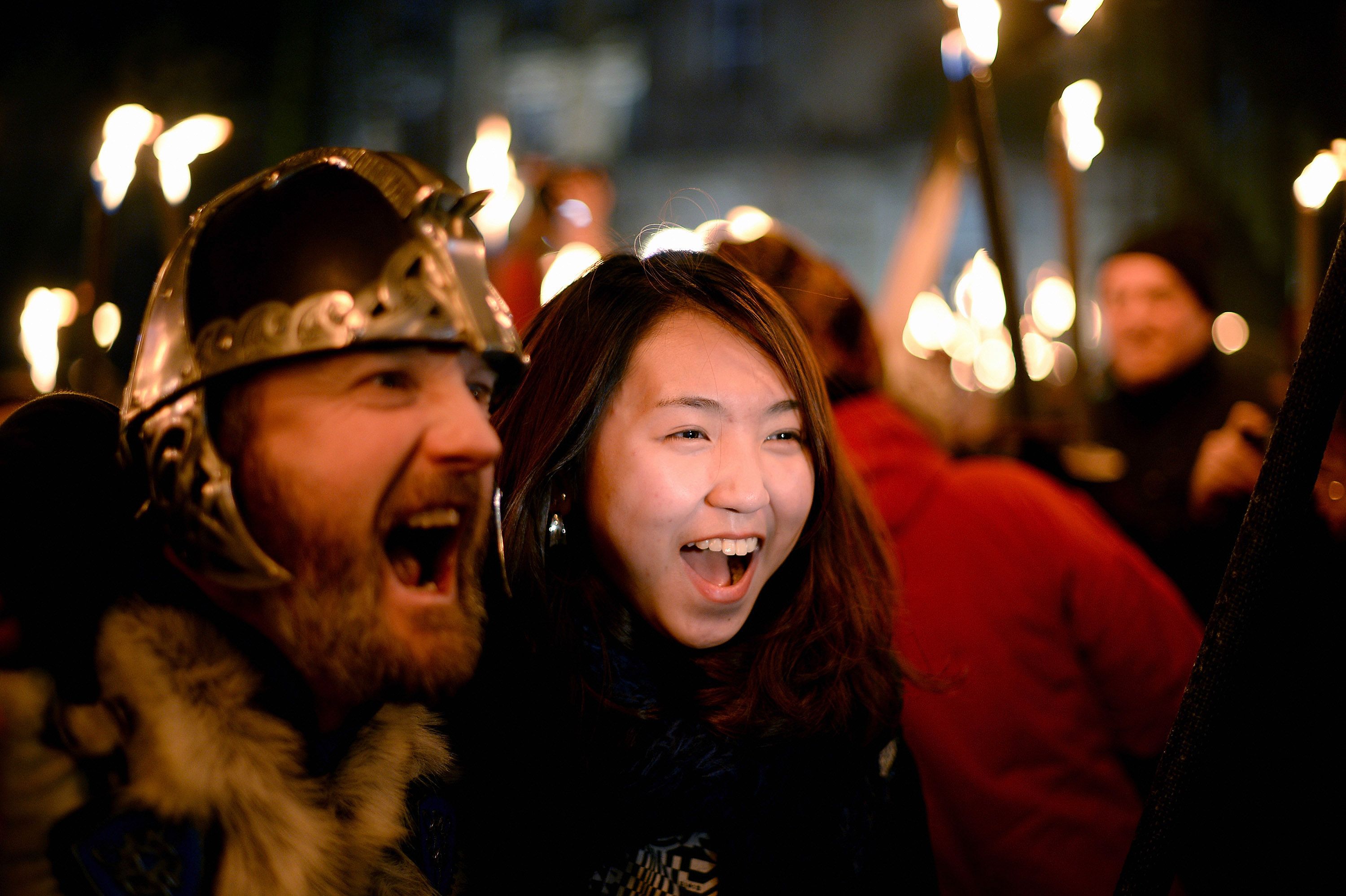 Four Frightful Films To Help Ring In The New Year

Around this time of the year, it’s usually the slasher Santas and crazy Krampuses that get all of the attention from horror aficionados, so it’s easy to forget that New Year’s Eve has its fair share of scares as well. Here are four films to help ring in a horrific new year. This list will go off the rails soon enough, but it may as well begin with something classy. This silent tour de force from legendary Swedish director Victor Sjöström is supposedly the film that inspired Ingmar Bergman to make movies. Watch The Phantom Carriage and you’ll see why. This is another one of those golden oldies which you could pause at any moment and have a piece of art worth framing.

But it takes more than pretty pictures to keep horror fans happy. Fortunately, The Phantom Carriage delivers some nice creepy moments as well, along with a story that would do Dickens proud. It seems that the last person to die on New Year’s Eve must become the driver of the Phantom Carriage for the next 365 days. During this time, said driver must endlessly circle the Earth collecting the souls of the recently dead. As the drunkard David lies dying in a graveyard at the stroke of midnight, the previous year’s driver arrives to show the sot what a wretch he has been to those who loved him. Much melodrama ensues.

It’s tame stuff by today’s standards, but some of the imagery still holds the power to send a chill up the spine. If you don’t believe me, ask Stanley Kubrick, who no doubt watched the scene with the axe many times before making The Shining. It’s easy to verify yourself, though. The Criterion Collection has a pristine print, but for those without the big bucks, The Phantom Carriage is in the public domain and can easily be found on YouTube or The Internet Archive. Okay, now that the artistic bonafides of this list have been established, we can get to the goofy stuff. Unlike The Phantom Carriage, Antisocial is definitely no classic, but some may still find it warrants a watch. The story involves a group of friends who decide to stay in on New Year’s Eve, a decision that saves their lives, at least for a little while. Thanks to a rather nasty brain-altering signal embedded in its website, the world’s largest social media site has started turning people into raging maniacs. All you have to do to avoid the virus is stay off of social media. All you have to do to live is stay away from anyone who didn’t follow the first rule. Unfortunately, nobody in this film does much of either.

In most ways, Antisocial is a standard low-budget ‘infected’ flick. There’s lots of running and screaming, plenty of brain bashing, and a total inability on the part of the characters to simply stay away from trouble. While the film is far from horrible, nobody can fault the many tepid reviews it has received. However, some kudos have to be given to first time director Cody Calahan for taking a shot at the current generation’s pathological addiction to social media and the potential harm that can come from it. As far as end of the world scenarios go, this one isn’t entirely unbelievable. Antisocial is currently available on Amazon Prime. Well, this list has seen a classic and a not-so classic. How about a film that’s a bit of both? That would be the go-to movie for many a December 31st gatherings, New Year’s Evil. Or maybe we should say New Year’s Eeeevil! That’s how the killer in this movie actually pronounces the word while speaking through one of those cheapo voice processors you can pick up at WalMart. Terror inducing? Hardly. Unintentionally laugh inducing? Oh yeah.

Marketed as yet another holiday themed slasher movie, New Year’s Evil plays like more of a traditional thriller with the police trying to apprehend the taunting Eeeevil as he murders one victim every time midnight strikes in a different time zone. His final announced target is an aging MTV-type VJ, which allows the proceedings to be generously interspersed  with all the excessive 80’s style clothing and hairstyles a person could want. And like any slasher/thriller worth its salt, there’s the obligatory BIG REVEAL of the killer’s true identity. (WARNING: Here there be spoilers!) In this case, the reveal is kind of bizarre as Eeeevil turns out to be the VJ’s husband who feels the woman’s intense focus on her career is driving their teenage son insane. And apparently he’s right as the final shot shows the young man donning his father’s mask, intent on finishing the job dear old dad started. Take that all you ladies who have to work outside the home. Guess the folks who made New Year’s Evil back in 1981 didn’t take to heart the lessons learned in the previous year’s Dolly Parton opus Nine To Five. New Year’s Evil is also available on Amazon Prime. Finally, let’s abandon all pretense and just go with utter lunacy. A few decades ago, Italian horror directors like Argento and Fulci were playing loosely with a formalist derivation of Andre Bizan’s concept of a “total cinema”. The idea was to create in the viewer a subjective experience of reality through a barrage of visuals and sound. Intelligible plots were often an afterthought in these movies, but that only contributed to the intentional disorientation of the audience’s senses. The resulting films such as Suspiria and The Beyond are now considered classics of the horror genre and watching them can seem like being trapped in a waking nightmare. With Bloody New Year, Director Norman J. Warren appeared to be going for some kind of jolly old English take on this technique. Unfortunately, about all he got right was the incoherence. Rather than being total cinema, Bloody New Year is just a total mess.

Still, there’s plenty of cheesy fun to be had in Bloody New Year if you’re in the right frame of mind. People get attacked by table cloths, fishing nets, and random blasts of snow. People get menaced on a Tilt-A-Whirl by weird carnies who look like the old doo-wop group Sha Na Na. People avoid attacks from ghostly ping pong balls by riding a billiard table. People get laughed at by shrubberies. It’s all entertaining rubbish up until the moment they try to explain it.

You see, in Bloody New Year, with little to no foreshadowing, the movie just up and tells you that all the craziness might be due to an experimental plane crashing on New Years Eve in 1959, an event which somehow trapped an entire island in a time loop. Why said time loop also created killer stair rails, touchy feely elevators, and frosting faced zombies is beyond my, or the movie’s, ability to explain. In the aforementioned Italian films, even though the plot (and common sense) were often given little attention, the movies at least dropped hints here and there to let you piece things together. It might take a few weeks, but eventually you’d have that “A-ha” moment where you finally figured things out. Alas, in Bloody New Year, all you get from the sudden revelation is more confusion. For some mysterious reason, this masterpiece isn’t officially available at the moment, but you can find VHS rips squirreled away on sites like YouTube and DailyMotion.

That should be enough to keep any horrorphile busy until the clock chimes midnight. Sure, watching scary movies on New Year’s Eve may sound counterintuitive, what with all those positive resolutions being made and all, but it actually makes sense. As a number of psychologists interviewed by Broadly noted, watching horror movies can actually help some people cope with anxiety. And if the posts that appeared on Facebook, Twitter, and other social media outlets are to be taken at face value, 2017 was anxiety-inducing for quite a lot of people. Maybe a few good scares are just what they need to relieve the tension before moving on to a more positive mindset. Have a Happy Horrific New Year, everyone!

Parts of this article were originally published at The B-Movie Catechism.