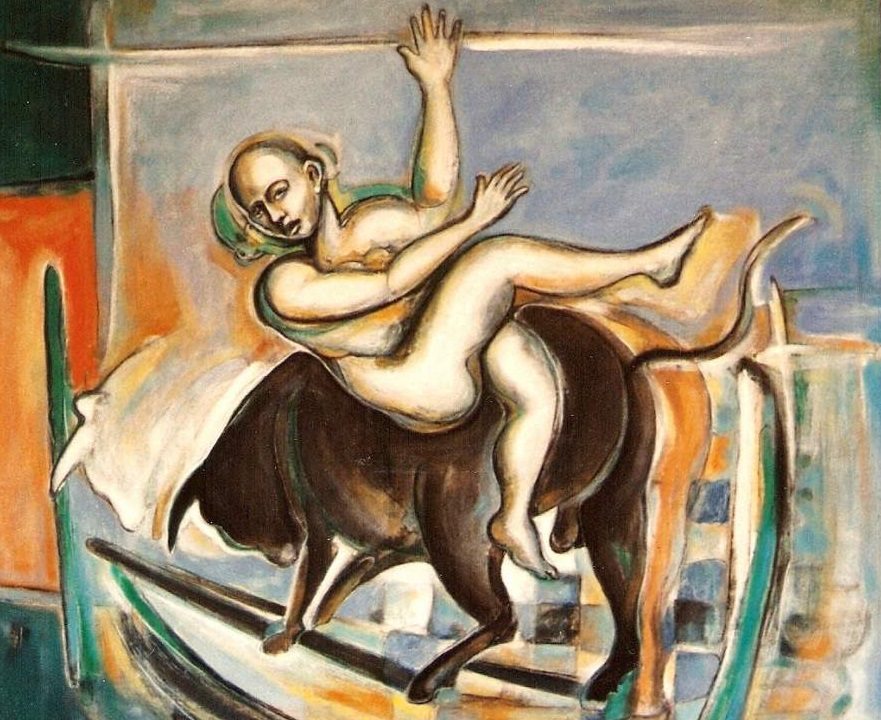 One of most delightful parts of reading as a child is discovering Greek mythology. The stories are lively and weird. The gods are mischievous, selfish, and power-hungry. Reading about them poses no moral challenge, as the life of Jesus does. You don’t need to ask “What would Zeus do?” You can just look into your heart, because they are the same: equally fallen. Except that the Greeks didn’t have an idea of an unfallen world. Even the Titans who spawned the gods were selfish and sometimes cruel. So were their children. You’ll find no real hint of Eden in the Greek mythical cosmos.

Nor of redemption. The closest thing to a messianic figure is Prometheus. He’s a Titan (one of the old guard) who jumped sides to help the newcomers. That kept him out of celestial prison. But then he showed disloyalty to Zeus by giving man the secret of fire. Threatened by man’s new power, Zeus sentenced Prometheus to a truly sadistic punishment: being chained to a rock, with a bird forever eating his liver, which forever regenerated, so his suffering couldn’t end.

Imagine Jesus hanging on the cross till the end of time, in a purely vindictive gesture that didn’t remit any sins. That’s Greek religion for you.

Tickling the Zeus Within Each of Us

And yet we love reading those stories. They touch the old Adam in us. Some part of us is weary from the demands of Christian living. Or even just adult, human respect for the dignity of others. The bratty teenager that each of us once was lives on in memory. We can fall back into it, and will, minus the constant, daily effort to be just, humane grown-ups. And that takes grace, or we fail. But to that adolescent inside of us, it feels just like success. He is succeeding. He has grabbed the steering wheel, he’s tossing back a tequila, and he aims to find out just how fast this school bus can go!

Which brings us to Harvey Weinstein. Why did thousands of adults with consciences cover up for him, do business with him, even pray to this rutting goat? I say “pray to” advisedly. Because Harvey Weinstein was a kind of god in Hollywood. One just like Zeus. And people invoked him in litanies of praise at their most sacred rituals: The Academy Awards, where winners thanked Weinstein more often than the one God. (Yes, Newsweek went through and counted.)

A Different Kind of Divine Love

Remember that Zeus was most famous for bedding nubile young women — since he’d been around for aeons, the age gaps were even greater than they were with Weinstein. Zeus was no more particular than Weinstein about how he did it. Sometimes he seduced, but often he used sheer overwhelming power or low deception to seek his pleasure. Weinstein would dangle roles, offer rewards, and sometimes (it’s alleged) just overpower women. Rape them.

He’d use female employees at late night, cozy meetings to make young targets feel safe, then send them away, so he could be alone with the actress, and the nearest potted plant. Can we doubt that if he had just a little more power, Weinstein would have turned himself into a swan? Or better, a bull? As for a shower of gold, well that’s what Weinstein promised these young women, wasn’t it? On the flipside, he threatened these hard-working, hopeful actresses that he’d freeze out their careers.

You see, Weinstein was just like Zeus: the king of the gods. Like Zeus, he was a newcomer. Zeus had overthrown and locked up his father, Saturn. So Weinstein was part of the “new Hollywood” that had come of age in the 70s and 80s. The Production Code had vanished, with its limits on on-screen nudity and gore, its demands for “moral” storylines where villains always suffered.

The new Hollywood could celebrate reckless killers like Bonnie and Clyde, dapper thieves like Butch and Sundance. And wouldn’t you know it, the most prestigious new studio was actually named … Sundance. Through Miramax, Weinstein helped build the market for “indie” films, by which we mean middlebrow movies with just enough literary references that college grads don’t have to blush at the nudity.

Like Miramax’s The English Patient. Its surfaces glittered. The acting was fantastic. Ralph Fiennes is my favorite male lead, and Kristin Scott Thomas oozes sexy intelligence and … class. Yeah, those movies were classy. Too bad that their moral heart was often rotten. In this film, Feinnes plays an Englishman who betrays his very best friend by bedding his friend’s wife. Then he betrays British interests to the Nazis in wartime, just to pursue his passion. In a subplot, another character gets hideously wounded, and the kind nurse offers him the “gift” of euthanasia.

Well, so was Harvey Weinstein. Zeus gonna … Zeus. And Hera, in the form of high-dudgeon Hollywood self-styled feminists, is gonna put up with it. She might secretly stew, or blame (even punish) the victims. But there’s no way she’s leaving Olympus over this. The perks are too good. And anyway, Zeus tosses gold at her favorite altars. He helps keep the gates open at Planned Parenthood, her temple.

Now, if someone came along and overthrew Zeus, took his power … then Hera would pile on. But she’s just as complicit. And everybody knows it. That’s why no readers ever sympathize with Hera.

No, that old religion really won’t do. Will it? If only there were some other option.…