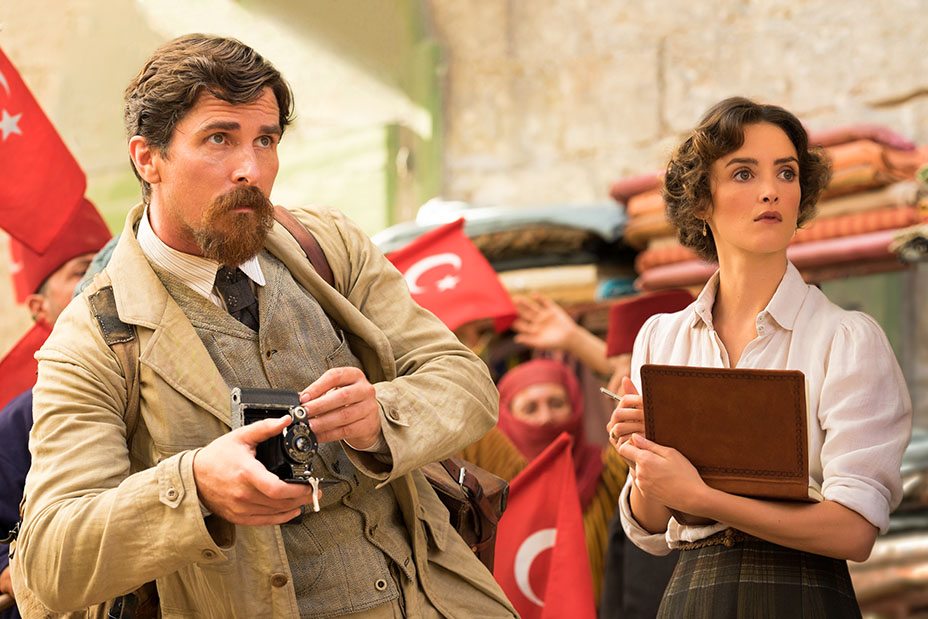 Terry George’s epic production The Promise is the first Hollywood film to depict the horrors of the Armenian Genocide, which befell the Christian population of the Ottoman Empire from 1915-1923. The documentary Intent to Destroy tells the equally shocking tale of the Turkish government’s continued denial of the event, its refusal to apologize to or compensate the victims’ descendants, and the effects this has had on them. Together, the two films offer a fascinating and well-narrated account of this dark chapter in history.

The Promise relates the story of a provincial Armenian pharmacist Michael Boghosian (Oscar Isaac) who uses his dowry to come study medicine in Constantinople, the capital of the Turkish Ottoman Empire. He promises to return to his bride Maral (Angela Sarafyan), hence the film’s title. While in Constantinople however, he falls in love with the beautiful French tutor Ana (Charlotte Le Bon) who is also Armenian. He vies for her affections with her then-boyfriend Chris (Christian Bale) a tough American journalist who soon sets out to document the killings of Armenians throughout the Empire. Under cover of war — the Turks allied themselves with Germany — the Turkish leadership soon begins the deportation and wholesale massacre of close to 1.5 million Armenians. It’s a harrowing tale and many in the audience openly wept when I attended.

George gives the film a sweeping old-fashioned Hollywood feel, which he shot almost entirely in Portugal: panoramic views, somewhat cookie-cutter character development, and good guys and bad guys. Apart from the disturbing fact that the Turks (the bad guys) seem to all have darker skin than the good guys (the Armenians), he does a commendable job of telling a difficult and complicated story. Isaac, Bale and Le Bon all perform beautifully, as does Shoreh Aghdashloo as Marta Boghosian’s, Michael’s mother).  The film ends with the Battle of Musa Dagh, immortalized in Franz Werfel’s 1933 blockbuster novel, which MGM was set to film until interference from the Turkish government pressured them into cancelling it.  For 40 days and 40 nights, the outnumbered Armenian villagers of Musa Dagh fought back the vastly superior and better-armed Turkish forces until they were rescued by French forces.

Michael has meanwhile kept his promise and returned to his ancestral village, only to find the entire town, and including his own family, murdered in the most gruesome ways. The last scene of the movie finds Michael in Watertown, Massachusetts several years later, surrounded by other Armenian survivors and their families. Like the Jews after the Holocaust, the Armenians survive and prosper.

Cut to Intent to Destroy, the meticulously researched and thought-provoking Joe Berlinger documentary that chronicles the continued denial of the Turkish government to admit that it committed this grotesque crime.  Turkish scholars interviewed during the film, such as Fatma Müge Göçek and Taner Akcam, point to the enormous amounts of property and money that the Turks stole from the wealthy Armenians (valued at over $300 billion in present day money). The modern Turkish state was founded on this money, and on the myth that Anatolia/Turkey was mono-ethnic (Turkish) and mono-religious (Sunni Muslim). To admit that they massacred 1.5 million Christian Armenians and another 1.5 million Assyrians and Pontic Greek Christians, the government fears, would unravel Turks’ sense of identity and their national narrative. In fact, before The Promise even hit the screens, an online campaign of several hundred thousand “orchestrated” reviews — one can only surmise that the Turkish secret services were behind them — gave the film a no–star or one-star ranking, even though it had only been screened three or four times at the Toronto Film Festival and no press copies had been sent out!

One really cool aspect of this documentary is that the director was embedded on the shoot of The Promise, so that the two films and narratives cleverly interweave. The documentary includes footage of director Atom Egoyan describing the threats and pressure he and producer Robert Lantos received while the 2002 Canadian feature Ararat, another film that describes the events of 1915 in a fascinating and very different way. Egoyan concludes by stating what many Armenians already know: They are still traumatized some four generations later by the tales of what happened to their forefathers and by the continued denial of the Turkish state. At one point an interviewee repeats a famous line by Elie Wiesel, that “denial is the last stage of Genocide.” Indeed.