Home Movies The Meyerowitzes Are Grueling 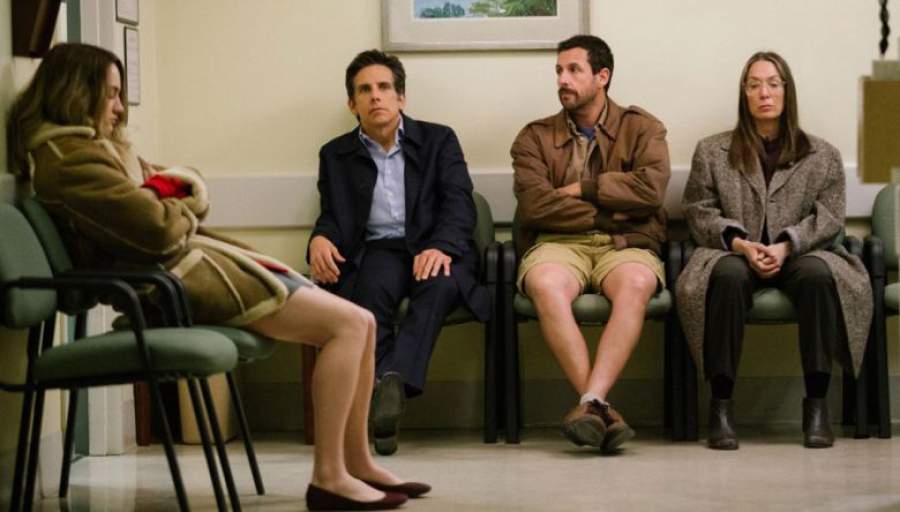 I have never been a huge fan of Noah Baumbach’s movies. After screening the painfully slow and self-indulgent The Meyerowitz Stories (New and Selected), I can’t say that I like his filmmaking any more than before. Baumbach is a darling of the New York indie crowd, but this almost entirely character-driven effort falls flat.  And that’s despite a star-studded cast.

Dustin Hoffman plays a difficult, bitter old sculptor Harold Meyerowitz, who has apparently browbeaten his three children into pathetic and angry adults. Danny (Adam Sandler) spent his entire life as a house husband. His wife has now left him and he must find a job for the first time in his life in his forties. He has a loving relationship with his daughter (Grace Van Patten) who goes off to Bard College where she makes bizarre ironic feminist porn flics. His sister Jean (Elizabeth Marvel) works for Xerox in a ho-hum job. Matthew (Ben Stiller) is the one traditional success-story, a smart money manager who is visiting a client in New York and also handling the sale of the Meyerowitz family house. Emma Thomson plays Harold’s fourth wife: she wears baggy pants, drinks too much and cooks atrociously (“Tonight, Maureen is making shark!”). Her eccentricities and bizarre diction ( a strange variant of the New York/Brooklyn accent?) annoy rather than charm.

Hoffman gives a standout performance as a whiny, curmudgeonly artist who is jealous or critical of just about everyone and everything, including old friends and past wives. He is always perfectly on pointe, but even he cannot completely redeem a lackluster film which is a downer from beginning to end.  Stiller and Sandler also deliver with as much aplomb as the script permits.

The humor notes aren’t that funny. For instance, the mild-mannered Sandler losing it as he tries to find parking: He screams “f**k you!” like a lunatic at passing drivers who can’t hear him. (Meh.) Whenever anyone asks Hoffman how he acquired a large bruise on his cheek, he answers that his dog pulled him to the ground chasing a wild hare. (Not funny either.) The entire film already has a morbidly funereal air to it — when wouldn’t you know it, Hoffman falls fatally ill and now everyone must come to terms with this tough, difficult man whom they realize they all loved after all….

Baumbach tells the viewer too much: not enough is implied, it’s just thrown at you and so there is very little mystery or suspense in this film. At one point Harold visits his first second (third?) wife. Played with grace by Candice Bergen, she appears in her living room and announces that she has something she has always wanted to say, namely that she felt she was a bad mother to her stepchildren. (“Not motherly enough.”) She wishes to apologize. She does. All this is done in the most serious, overly earnest presentation—like most of the film, it positively sweats earnestness.

You have to credit Baumbach with being a serious filmmaker who deals with genuine issues: father-son relationships, difficult family dynamics and ultimately life and death. But watching The Meyerowitz Stories unfold is a bit like watching a Woody Allen flic without any of the humor. Or an overwrought sitcom. You leave feeling sad for everyone involved, and for yourself as well.