Six Movies with Horrific Haunts for Your Halloween Viewing

Home The Horror! Six Movies with Horrific Haunts for Your Halloween Viewing 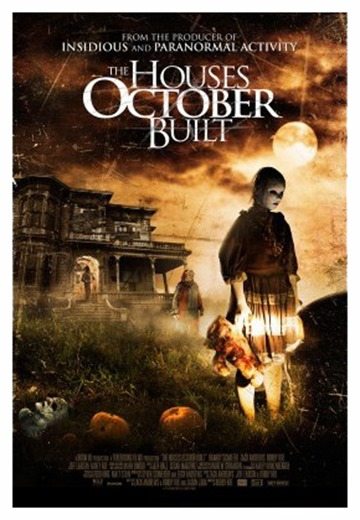 Six Movies with Horrific Haunts for Your Halloween Viewing

According to an article in Forbes, one in every five people will attend a haunted house attraction, or haunt for short, during the days leading up to All Hallows Eve. In the U. S. alone, that means somewhere around 65 million willing victims queue up for no other reason than to be scared out of their wits. What Forbes neglects to mention is just how many of those standing in line wonder to themselves, “What if there’s a real maniac hiding in there just waiting to disembowel me?” Whatever the number, it’s safe to say quite a few Hollywood screenwriters have had that very same thought cross their minds. Here are six films featuring horrific haunts and where you can find them for some harrowing Halloween viewing. Five friends come together to plan a haunt and, to save money, move into the location while they set the place up. Things get consecutively weirder until opening night, when all hell breaks loose and lots of people die. Five years later, a documentary crew assembles all of the available footage to determine what went wrong and that’s when things get weirder still. Hell House LLC is a nicely done little found footage film with a consistently creepy atmosphere and some legitimately spooky moments. You can catch it right now on Shudder. Another found footage film with another group of five friends. This time however, our ill-fated protagonists are a group of thrill-seekers on a tour of the deep south in search of the most extreme haunts they can find. As they make their way towards the legendary Blue Skeleton, they manage to tick off the staff of almost every haunt they attend. It isn’t long before they no longer have to look for scares, because the scares come looking for them. Not quite as eerie or satisfying as Hell House LLC, The Houses October Built still has its moments. It’s available now on Netflix. Basing the theme of a haunt on the murderous rampages of the six worst psychopaths in the country sounds like a fun idea, right? Well, not if said psychos escape their nearby secret lockup and decide to come take over the attraction. The customers are definitely going to demand refunds, assuming they can avoid being gutted, of course. The Funhouse Massacre isn’t all that great, but it does have Robert Englund, Clint Howard, and just enough stupid for those who prefer their entertainment a bit more on the campy side. You can catch it on Showtime Anytime. If you can only watch one movie with funhouse in the title, it’s probably best to stick with Tobe Hooper’s The Funhouse. When four teens decide to sneak into a fairground haunt after hours, they get much more than a simple night’s fun after running afoul of the ride’s proprietor. And once the man’s monstrous son gets involved, not everyone will make it to the morning alive. While nowhere near the classic that Hooper’s Texas Chainsaw Massacre was, The Funhouse still manages to deliver its fair share of scares. Better yet, it perfectly captures the surreal, sleazy, and occasionally nightmarish atmosphere of a small town carnival. You can see for yourself on Starz. As long as we’re at the carnival, we might as well have some fun, which is just what Ghoulies II delivers. Following their escape at the end of the first film, everyone’s favorite Gremlins rip-offs take up residence in Satan’s Den, a failing fairground dark ride. Once the Ghoulies get involved, however, the crowds start showing up in droves. At least until they all figure out the ghoulish shenanigans aren’t part of the show, that is. Once the Ghoulies’ cover is blown, it’s puppets gone wild time. Don’t bother looking for quality, just come for the entertainment. Even the kids can watch this one. It’s streaming now on Amazon Prime. Finally, what would a list like this be without at least one old-school slasher on it? HauntedWeen follows a group of fraternity brothers as they dumbly decide to use the local abandoned spook house as a location for their fund raising haunt. As you might expect, somebody isn’t very happy about the bros setting up shop in their old stomping grounds. Before long, the frat boys and their female friends find themselves unwilling participants in the show. HauntedWeen is hardly a good movie, but it should be just right for anyone with a weakness for low budget late-80s regional horror shot on the cheap in Bowling Green, Kentucky (and you know you’re out there). Finding this one can be a chore, but VHS rips often pop up in the usual places.

Well, that should be more than enough movies to convince anyone that going to a haunt could be hazardous to their health. And yet the statistics say millions will buy tickets anyway. In a interview with Psychology Today, Josh Randall, creator of Los Angeles’ infamous Blackout, has some ideas on why so many people show up to haunts. “Audiences want to know if they can make it all the way through… without calling safety,” he speculates. “The fear they experience in that time gives them a rush, and makes [them] feel more alive.”

Speaking with The Atlantic, sociologist Margee Kerr seems to agree. She explains, “We have fun doing these scary things because it leaves us feeling really confident in ourselves, because we’ve done something challenging and we survived. So that is going to make us feel like pretty badass, even though we know it’s fake.” Or at least we hope it is, because as the movies we’ve just discussed have shown us, you can never be 100% sure it’s all just a put-on. Enjoy your trip to the haunt this Halloween, everyone. Here’s hoping you make it to All Saints Day.