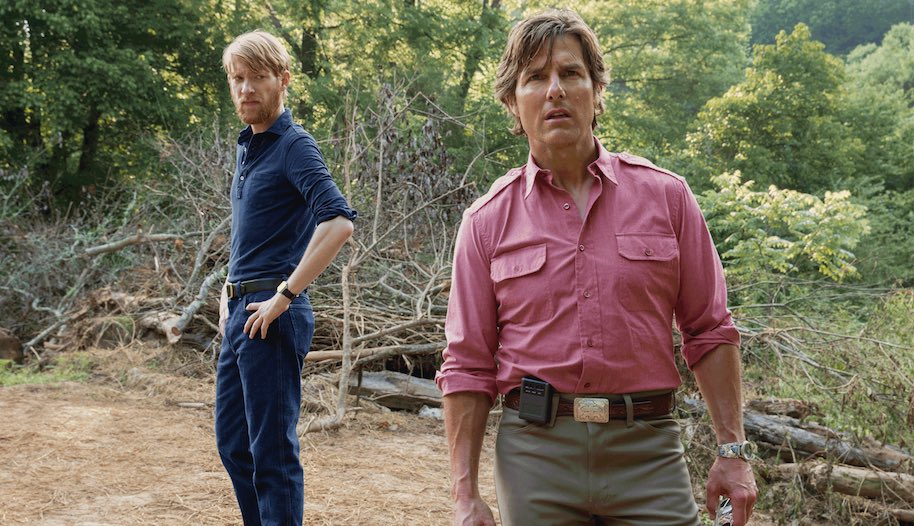 The new movie American Made says that it is “based on a true story.” If that is an accurate description, then King Kong should be called a documentary. American Made is to history what Disney’s Dumbo is to elephant poaching. You can glean as much truth by talking stocks with Bernie Madoff or listening to a Scientology lecture.

Perhaps that explains Tom Cruise’s connection with this film. If you have come to believe, as he has, that 75 million years ago billions of humans were brought to earth by Xenu, the leader of the Galactic Confederacy, and then killed by hydrogen bombs planted near volcanoes, so their floating souls infest us all … then the script of American Made might seem plausible.

A Paranoid Fake History of the 1980s

I should say here that I am about to spoil the movie’s plot. So those who plan to see it and who wish to be lied to may want to stop reading. For those who are not infatuated with ignorance, however, this is its story:

In the late 1970s Barry Seal (Cruise) is a mischievous but good-natured TWA pilot. Approached by the CIA, he agrees to become a private agency contractor who engages in surveillance of Central American Communist groups. He does this by flying small but fast planes over remote territories south of our border. In return for his labors, the CIA buys him a 2,000 acre airport in Mena, Arkansas, and all seems to be going swimmingly.

But Seal soon winds up in trouble on a journey to South America. Kidnapped by the Medellin Cartel, he is forced into drug smuggling on their behalf. The CIA looks the other way, then blithely helps him bring tons of cocaine into the United States. This is because the Agency wants Seal to use the airport as an illegal training ground for the Contras. Seal is additionally instructed to send arms to back these Nicaraguan rebels. But Seal instead sells some of these weapons to the Medellin Cartel — again with CIA knowledge. In the midst of all this, Seal is caught by the FBI and the Drug Enforcement Agency (DEA) and exposed as the nation’s biggest drug smuggler.

But he walks. We seem him released at the direct orders of Arkansas Governor Bill Clinton, who is working with President Ronald Reagan. At this point Seal makes a deal with DEA so that charges against him will be dropped. To that end, he visits the White House, meets Oliver North and George W. Bush (yes, the son) and agrees to head back to Managua, where he will take pictures of the Medellin Cartel in order to show that it has relocated to Nicaragua and is in business with the country’s Communist government. Seal succeeds at this. But in retaliation the Cartel arranges for Seal’s assassination.

The only true parts of this tale are these:

Literally everything else in American Made is false.

There is no evidence that Seal ever worked for the CIA or that he even had the vaguest connection with it. Seal did not voluntarily stop working for TWA in the late 1970s. In fact, he was fired from the company in 1972 after he unsuccessfully attempted to smuggle plastic explosives into Mexico City. And his involvement in smuggling drugs was not forced on him by the Medellin Cartel. In fact, he was busy bringing all sorts of narcotics, especially Quaaludes, into the United States quite apart from his employment by the cartel.

The film even misrepresents minor details of the story. Thus, in the film Seal’s undoing is partly a function of the actions of his idiot brother-in-law, J.B. (Caleb Landry Jones), an ex-con who is so dimwitted that Seal does not even trust him to sweep the floors of his airport’s hangar. In fact, Seal employed him as one of his main pilots.

Why was this preposterous movie made? It seems to have something to do with the familial grievances of its director, Doug Liman (Swingers). He is the son of Iran-Contra investigator Arthur Liman. As his father failed to gain convictions in the case, he is apparently bent on doing what daddy could not and discrediting Reagan and the Bushes.

In this tale, the cocaine trade is a creation of the United States, which used the proceeds to fight Communism. That was the contention of the Christic Institute, a “nonprofit, interfaith center for law and national policy in the public interest” that launched in the early 1980s.

As the Christics had it, U.S. policy from the late 1950s was a massive anti-Communist plot, funded by profits from drug dealing. President Daniel Sheehan and executive director Sara Nelson believed Marxist dictatorships liberate oppressed people and establish social justice. So the Christics helped Nicaragua’s Sandinista junta by attacking the “Contras,” whom they called Nazis and fascists….

[T]he Christics deployed fabricated testimony and deceptive affidavits. On June 23, 1988, U.S. District Court Judge James King dismissed the Christics’ lawsuit and all charges. The Institute soon found itself under fire, even on the Left.

The Boston Globe blasted the Institute as a “far-left, celebrity-fueled conspiracy boutique” and The Nation and Mother Jones saw fit to unload on Sheehan. Likewise, a congressional subcommittee headed by John Kerry concluded there was no evidence the CIA participated in the cocaine trade.

On January 13, 1992, the U.S. Supreme Court ruled that the Christic Institute had to pay more than $1 million in compensation to the victims of its bogus lawsuit.

Based on these discredited conspiracy theories, American Made is shameless and disreputable. It manages even to slander Bill Clinton. If public figures could readily sue for libel, this movie would likely have never been made.

Yet many American journalists have been taken in. The critic for USA Today, for instance, called the film a “real-life morality tale,” and he began his review by saying that it “points out an unfortunate time in our history when government shenanigans ran amok internationally and people did bad things in the name of greed and power.” No wonder people suspect that much of our news is “fake.” When big stars and big studios produce blatantly falsified accounts of important events in our nation’s history, huge newspapers lap it up, like cats drinking antifreeze.