“Prosperity” Is Rich In Ideas, But Perhaps Less In Answers

Home Feature “Prosperity” Is Rich In Ideas, But Perhaps Less In Answers 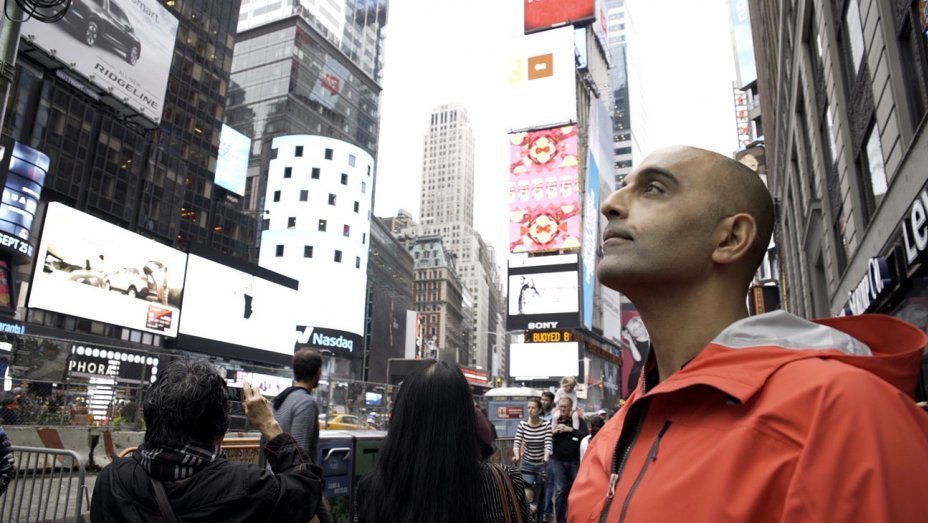 “Prosperity” Is Rich In Ideas, But Perhaps Less In Answers

The new documentary Prosperity features the self-proclaimed “Urban Monk,” Pedram Shojai, traveling about the globe in search of answers.

Shojai is not what most people think of monks as being. He’s not quiet, nor retiring. Rather, he’s an aggressive self-promoter — as bashful as Paris Hilton after a pitcher of gin and as modest as a pro wrestler holding a microphone in one hand and a championship belt in the other.

But that doesn’t mean that Shojai has nothing to say. Still, if you do see his new movie when it’s released on September 29th, be prepared for a grab-bag of ideas. Like so many current pundits, Shojai is an enthusiastic admirer of Third World villagers, and that’s fitting as his film is a little like a stew made by rain forest natives. It seems to have been thrown together with every available ingredient.

Shojai’s main concern is what has been called the Triple Bottom Line. This is a conception of business in which the entrepreneur must think not only of his profits but also how he has acted with respect to other people and the environment. Has he been a good steward of the planet? Has he been ethical in his dealing with his workers and his customers? Shojai believes that businessmen should be as able to answer these questions affirmatively as they must be in responding to queries at a shareholders’ meeting.

The result is a philosophy that is a bit vague and touchy-feely. One is inclined to ask how any of this can be quantified or even well-understood. Of course, that ideas are not easily reduced or systematized hardly means that they should be dismissed. And Shojai rightly points out in the film that Adam Smith, the mighty Scottish theoretician of trade and the first great advocate for the benefits of capitalism, was also a moral philosopher who was acutely aware that businessmen have responsibilities that go beyond the mere pursuit of profit and of the interests of their shareholders.

Moreover, although Shojai does not refer to it, we might also point out that this is an idea with a long history to it. Thus, many medieval enterprises — like commercial guilds — saw profit as only one of their motives. Further, companies do have duties and obligations to their employees and to the nation, and the decay of this consciousness is a tremendous and undeniable problem.

At the same time, the examples that Shojai cites in making his case for the Triple Bottom Line are not always consistent, and his arguments tend to be hit and miss. Perhaps the worst example that he cites for his philosophy is the Container Store. Shojai notes that the company is known for having satisfied employees and that this has helped it to retain staff and to gain high productivity from them. Yet it is surely ironic to point to a company whose business is selling non-recyclable plastic containers  and other unnecessary junk as a Triple Bottom Line corporation.

Shojai also travels to Austin, Texas to interview Whole Foods founder and CEO John Mackey. Mackey is a fascinating interview, and he provides Shojai with a brilliant analogy. Comparing the body to a company, Mackey notes that a person will die if they do not produce red blood cells. But, he points out, the aim of a man is not simply the manufacture of hemoglobin. In the same way, he says, companies must have profits. Yet this should not be the sole aim of a business.

A particular focus of the film is the issues that arise from what economists refer to as an “externality.” This is an economic consequence that is unrelated to the completion of an ordinary transaction between a buyer and a seller. Pollution is a prime example of this. The purchasers of plastic water bottles create a problem when they dispose of the bottle, though this did not affect the company that produced it or the person who consumed the water contained within. What Shojai fails to acknowledge is that these difficulties can be remedied through legislation — as, for example, by charging consumers a bottle deposit. This means that it may not be necessary or desirable to fundamentally reconfigure our ideas of the corporation to address these issues. An indication that industrialization is the root problem and not democratic capitalism may be found in the fact that pollution is a much more serious issue in Communist states and dictatorships than it is in Western democracies. Shojai does not acknowledge this.

Still, the Urban Monk is asking meaningful questions. This is true even if some of them seem to be as easily understood as the old question of what the sound is of one hand clapping.