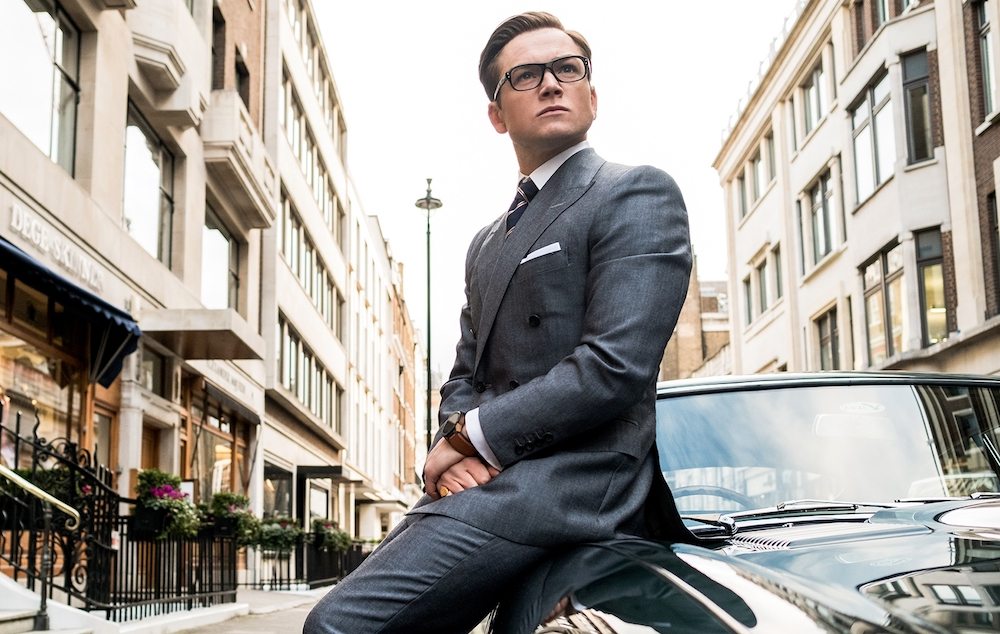 The first film cost $81 million to make and had a worldwide gross of $413 million. The makers must figure that the new one, which probably cost twice as much to shoot, might gross twice as much as the series opener. It’s going to be hugely popular. And if writer director Matthew Vaughn and his collaborator Jane Goldman show as much panache in scripting the further sequels they plan, I suspect that the series has a chance to become the leading movie “franchise” in Hollywood. At the very least, I think it’s a good bet that the next ten years of this new spy action-adventure series will outperform the increasingly weary James Bond series that it consciously imitates (and knowingly parodies.)

I’d rather not give away too much of the plot of Kingsman: The Golden Circle for fans who are planning to see it. A few facts may be helpful for the uninitiated though. The Kingsman movie series is based on a series of comic books by Dave Gibbons and Mark Millar. Gibbons is a British illustrator who has worked on a series of famous graphic novels, including the much beloved “Watchmen” series, while Millar is a Scottish comics author with assorted crank left-wing opinions. The two men’s comics revolve around a secret, private British spy agency composed of specially trained agents who flit about the globe. Using assorted gadgets of the kind that the Bond movies of the 1970s favored, the agents battle super-villains.

The first film in the series concerned the initiation of a young operative (Taron Egerton) from the streets of London and his eventual involvement in a battle with Richmond Valentine (Samuel L. Jackson), a billionaire who plots to “cull” the human race in order to prevent global warming.

The new movie focuses on a scheme orchestrated by an international drug kingpin (Julianne Moore) who is obsessed with 1950s retro culture. Once again, hundreds of millions of lives are at risk, and high tech weaponry must be employed against villains hiding out in remote lairs.

The Kingsman movies are spot on in their sense of where the pop culture zeitgeist is. They very effectively capture the unquestioned premises in the heads of the greater number of young people who go to the movies. Because this is so, they are keys — instruments — by which we can interpret where pop culture is and where it’s headed.

In this sense, they offer both good and bad news.

Let’s start with the good news. One of the things that the Bond movies notably celebrated, of course, was womanizing and lechery, and from the first they displayed a want of respect for women. It’s plain that this 1960s ethos is no longer so easily tolerated by the public, and it’s worth noting that the next Bond movie is reported to be about 007 seeking revenge on the killers of his late wife to whom he was devoted and for whom he left the spy game. (Yes, really.) It seems that even the makers of the Bond movies have realized that casual male infidelity is no longer cool or acceptable.

In this film, our intrepid hero is devoted to his girlfriend (Hanna Alström) and unwilling to cheat on her — even when it might be necessary for him to do so in order to save the lives of millions of people. Commitment is “dope” and promiscuity, it seems, is “whack.”

And the bad news?

Unfortunately, there’s plenty of that. In particular, the movie suggests that both Hollywood and the teen audience it appeals to is suspicious of democracy. Thus, neither the Kingsmen nor the American spy organization they must ally with known as the Statesmen operate on behalf of a civilly constituted authority. And the film’s plot suggests that our elected leaders will happily countenance our deaths in the name of law and order.

The movie also offers a morally ambivalent message on drugs. The villainess (Moore) informs the audience that sugar is more addictive and dangerous than heroin, and the film’s characters, although they are punished for it, blithely ingest a range of narcotics. Moreover, in place of the obviously mature heroes offered in the Bond films, we are given a man-child protagonist in actor Taron Egerton. Manhood is plainly in a somewhat arrested state.

The film’s style is revealing as well. It’s a mash-up of video games, Saturday Night Live sketch comedy and past action films. This includes not only the Bond movies but the roster of Quentin Tarantino pictures. Scenes of brutal violence are treated as an in-joke. Shot with countless quick cuts, they are scored to loopy pop songs from the 1970s and 1980s.

The movie also frequently asks us to treat its characters and its story as a put-on. Thus, one of its central characters, played by Pedro Pascal of Game of Thrones, is winkingly attired and made to look like Burt Reynolds in his  Smokey And The Bandit days, no matter that Pascal is playing a central role in the story.

Kingsman: The Golden Circle is very clever. But I was especially reminded of its artistic deficiencies by the make-up of its cast, which includes Mark Strong and Emily Watson. More than a decade ago I saw the pair in New York performing in what may have been the best stage presentation I have ever witnessed: an inspired production of Shakespeare’s Twelfth Night. Although the play is a very amusing comedy, its painful truthfulness filled me with melancholy. Those real emotions are absent from this adroit but implausible and vapid confection.