Silly but Serious: The Lessons of “Captain Underpants”

Home Feature Silly but Serious: The Lessons of “Captain Underpants” 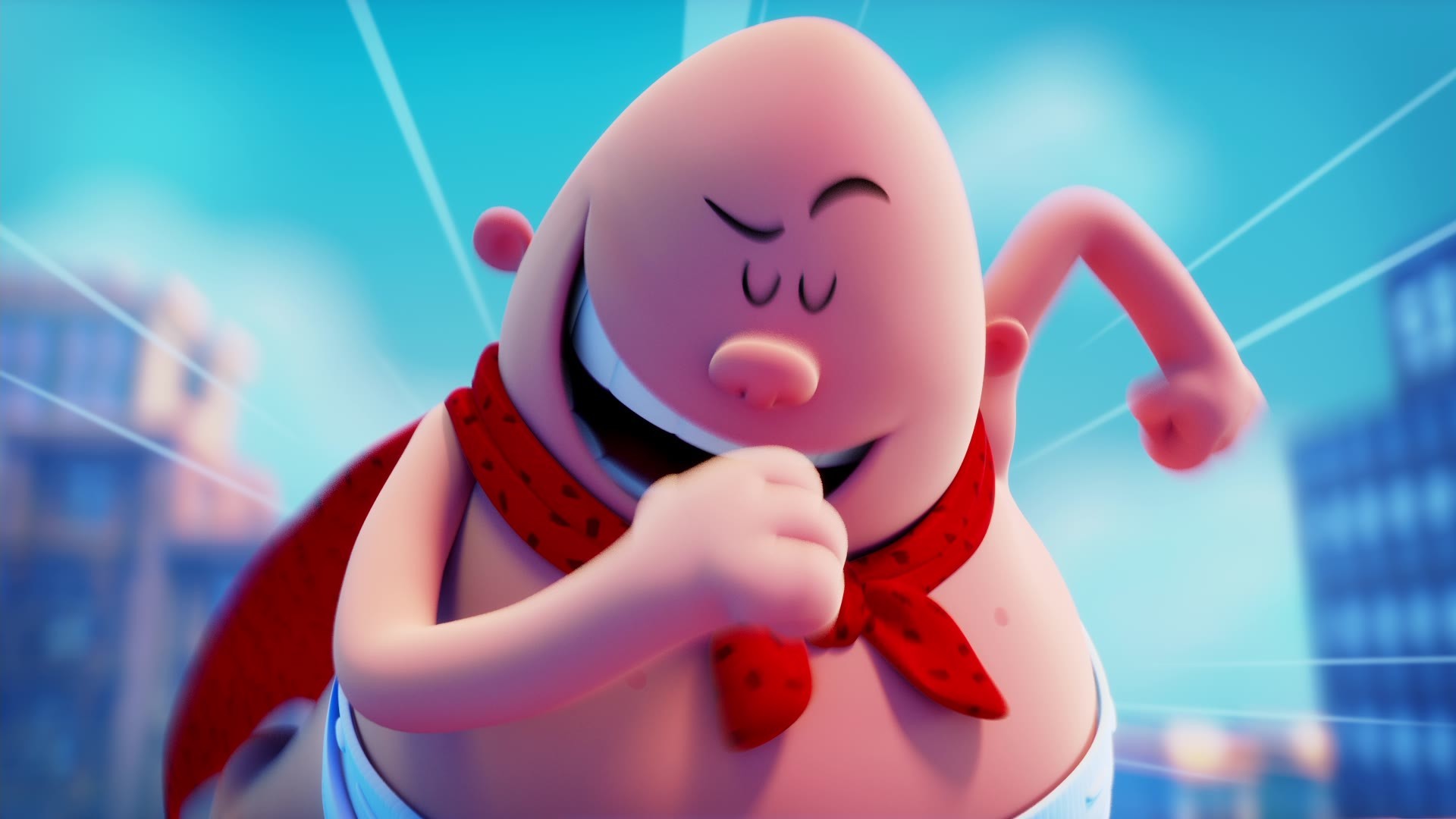 Silly but Serious: The Lessons of “Captain Underpants”

George and Harold are two fourth graders with a penchant for potty humor, hanging out in their treehouse, and creating their own comic books. The cream of their crop is Captain Underpants, a broad knock-off of Superman, right down to his exoplanetary origin story, a bizarre mishmash of superpowers, and proclivity for dressing in – you guessed it – underpants. George and Harold are just a little more to-the-point with their superhero.

As the two read off the origin story of Captain Underpants, the animation style is stolid and flat like the panels of a comic. But then, the horrible principal Krupp confiscates their book and tears it to shreds. The film freezes, and George and Harold break the fourth wall and explain their situation.

This juvenile comedic style persists throughout Captain Underpants – The First Epic Movie, and the grade-school irreverent tone is an absolute triumph. Meanwhile, the film champions the importance of happiness, humor, and friendship in the face of sour-puss authority. 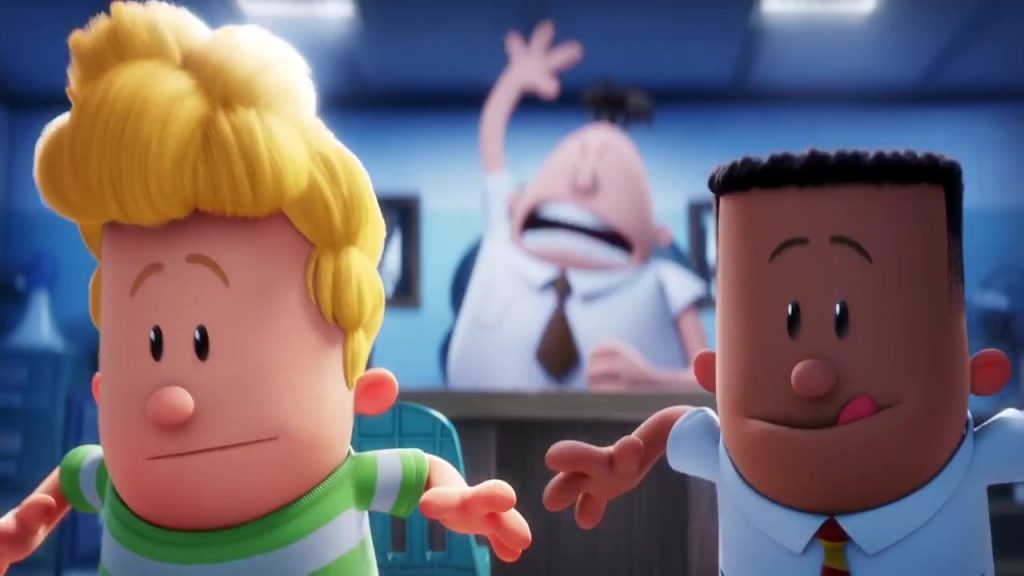 Harold and George, best friends up to absolutely no good.

The plot of Captain Underpants is as zany as one would expect from the basic premise. George (Kevin Hart, paradoxically much more reserved than in his normal voiceover work) and Harold (Thomas Middleditch) are peas-in-a-pod, and fervent pranksters. One day, they go too far and get caught, allowing Principal Krupp (Ed Helms) to banish them to gasp separate classes! With the death sentence of their friendship imminent, George goes to extreme lengths and hypnotizes Krupp with a plastic ring he got from a cereal box. This being this movie, it works, and eventually they command that Krupp be a real version of Captain Underpants!

That’s only the beginning of their problems, though. Whenever Krupp gets doused with water, he reverts to his true self, so the kids have to keep an eye on him. Plus, Captain Underpants is a big idiot, so they kind of have to keep an eye on him anyways. The actual villain of the story is the precisely named Professor Pee-Pee Diarrheastein Poopypants, Esq., who has a real issue with people making fun of his name for some unexplained reason. As a mad scientist, he must enact an evil plot to do something, so he naturally chooses to rid the world of laughter. 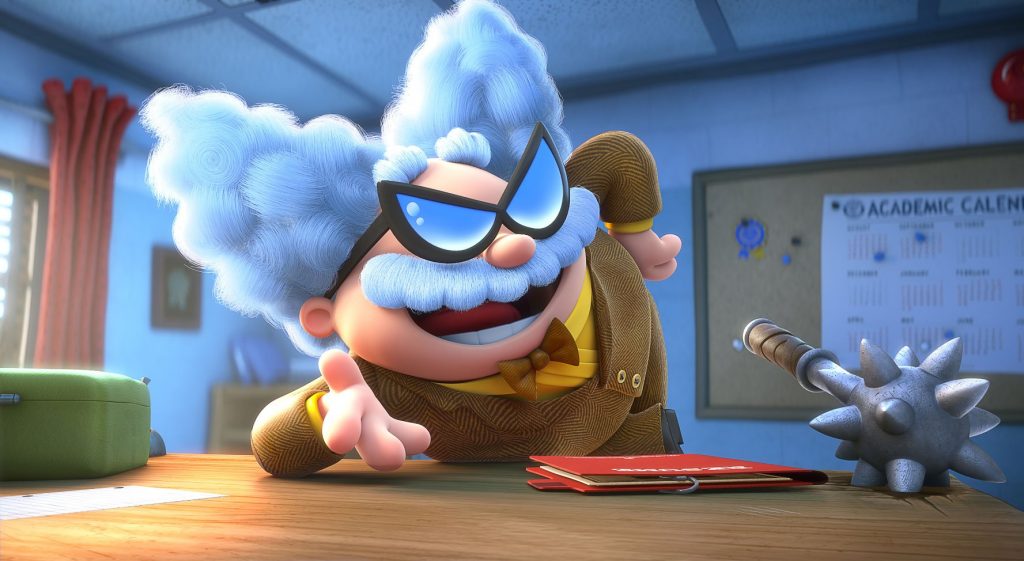 Nick Kroll as the bad guy with the funny name. Very Dr. Strangelove.

Obviously, this is all bonkers. And, that’s the fun of Captain Underpants. It’s two fourth-graders cracking poop jokes and laughing at the camera while they employ some advanced meta-humor and nothing’s as it seems. The character of Captain Underpants is perfect for this: a clueless weirdo who believes in abilities he doesn’t have and a reality that just isn’t so. This is mined for comedy thoroughly, and it is fun when Harold and George laugh right along with us, never taking anything too seriously.

The animation style of Captain Underpants is also quite casual. It’s perceptibly basic, without any of the gloss of Pixar or Disney or even most other Dreamworks films like How To Train Your Dragon or Kung Fu Panda. But, instead of this primitive style feeling cheap and cynical, it perfectly matches the cavalier attitude of the characters and the overall tone of the film. With a budget of only $38 million, this is by far Dreamwork’s cheapest CGI animated film, but by using to style to their benefit, it may also be one of the most aesthetically appropriate. 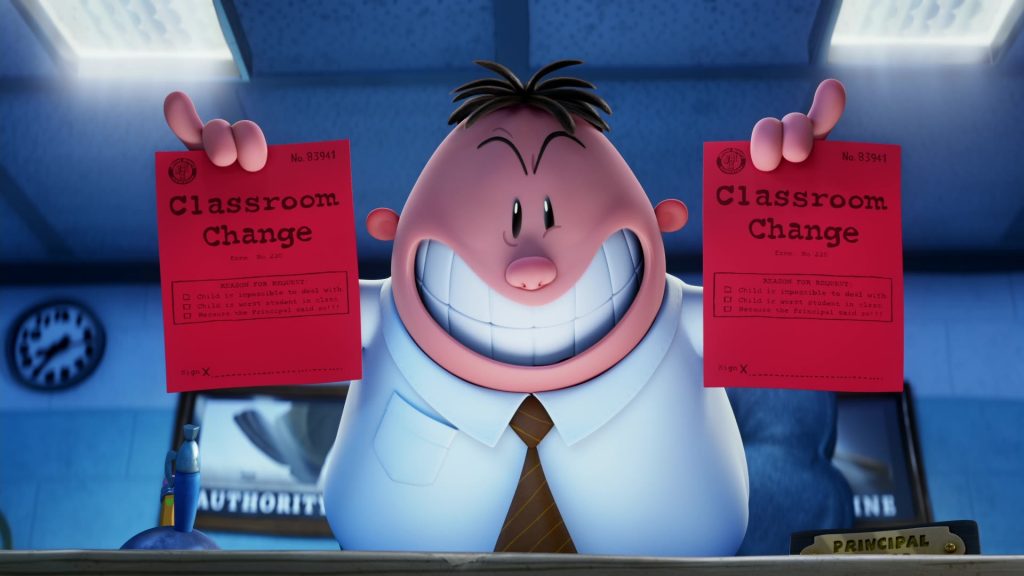 The figurative end of the world.

This animation style even extends to some of the action sequences! The climactic scene involves a giant toilet fighting a fully-powered Captain Underpants (this all involves toxic waste derived from cafeteria leftovers, obviously). But, instead of showing the expensive action, Harold and George narrate the action from a flip-book they’ve drawn.

Two pages flipping back-and-forth show the giant toilet stepping on Captain Underpants multiple times, and the action pauses for a while as George balks at Harold’s inclusion of dolphins into the story. Ultimately, Harold’s pad of paper runs out, and we’re right back into “the real world,” and our heroes have to confront the toilet directly! Deadpool didn’t even play this hard-and-fast with its narrative rules and stylistic techniques. 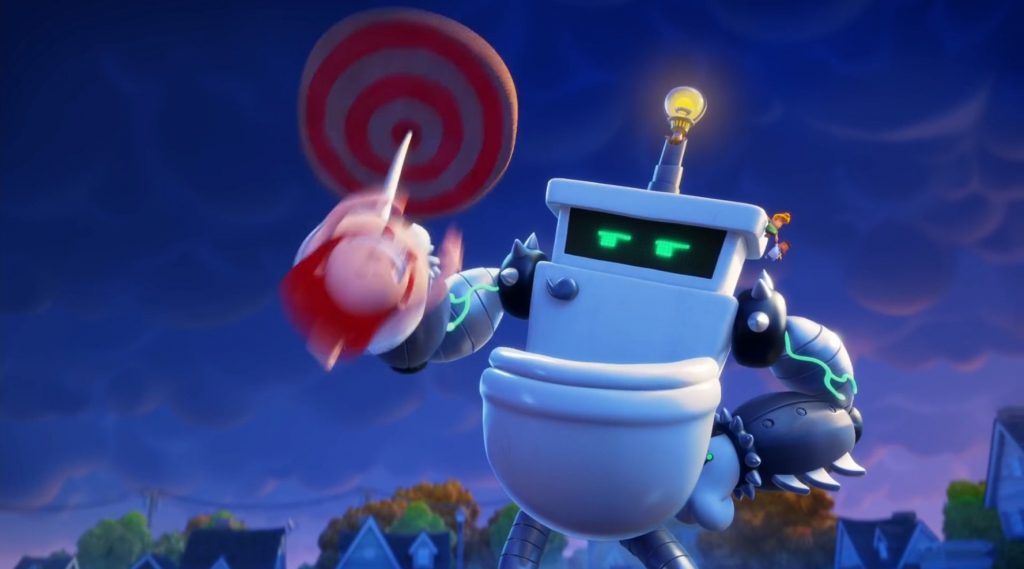 The giant toilet totally makes narrative sense. At least, more so than the giant spider from Wild Wild West or Doomsday from Batman v Superman.

As zany as Captain Underpants gets, it all grows from an anti-authoritarian theme. In the film, George and Harold just want to tell stories, have some fun, and enjoy each other’s friendship. They want to create and flourish, while Principal Krupp and other characters are more interested in snuffing out their enjoyment, in seeing them miserable.

In this context, George and Harold’s pranks and comics are elevated above mere grade school shenanigans, and become a principled defense of creativity, imagination, and the pursuit of happiness. Even in the face of a madman with a weapon that literally extinguishes one’s sense of humor, George and Harold’s drive to enjoy life is indomitable.

Captain Underpants – The First Epic Movie is a kid’s flick through-and-through, but it is much smarter than other films that try to exploit young spectators with toilet humor, shiny CGI, and goofy characters. Here, the toilet humor is used for characterization, tone-setting, and even as a plot element.

The CGI is toned-down and casual, offering a unique aesthetic that fits perfectly with the subject of the film. And the characters are wonderfully warm, even in the midst of their biggest pranks. For a film bursting from the seams with irreverence and sarcasm, Captain Underpants is never insincere or cynical. It’s just a fun bit of off-the-wall entertainment, expertly crafted and with a specific vision.