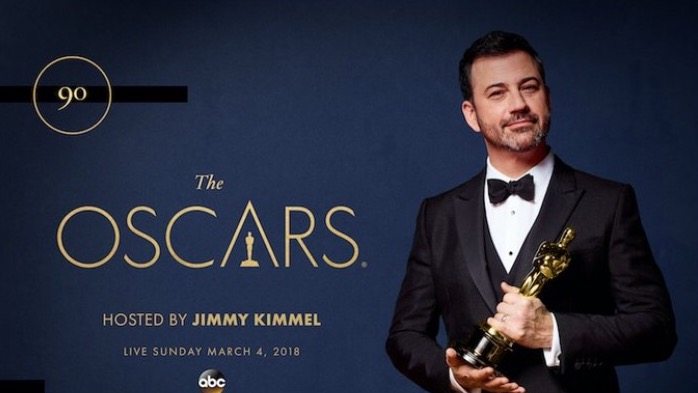 Jimmy Kimmel will be returning as host for the 2018 Oscars scheduled March 4 on ABC. This will be his second Oscars as host, and what a surprise, considering what happened in 2017. Even Kimmel predicted that it would be his last time hosting when he said, “This is my first time at the Oscars and the way you people go through hosts, it’s probably my last.” Not true Jimmy. You’re in! In spite of hosting what turned out to be the craziest Oscars night ever! Perhaps it was how he handled the night that made him a favorite for 2018.

His opening joke toward Justin Timberlake wasn’t the funniest, but he got better. Especially in his monologue during which he gave a nod to two of the best picture nominees saying, “What a great year for movies. Black people saved NASA and white people saved jazz. That’s what they call progress.” He tweeted the President during the event and even brought a bus load of tourists from outside to meet and mingle with celebrities. And there were the cookies and candies that fell from the ceiling. That was a pretty good moment. (I’ll give that one to the producers.)

And of course there’s Matt Damon. Will we see more of the now infamous and pretty damned funny feud between Kimmel and Matt Damon. Considering the feud has been going on for years, sure we can. Another great 2017 moment was when Kimmel had the announcer introduce Ben Affleck and Matt Damon (who were presenting best screenplay) as Ben Affleck and guest. Then Kimmel lead the orchestra to play when Damon was talking, causing him to react, “I’m a presenter. You can’t play me off.”

And there were the cookies and candies that fell from the ceiling. (Oh yeah, I said that already.)

I imagine we’ll all be holding our breaths when the envelope is opened for the 2018 best picture of the year announcement. No one can forget the debacle that announced La La Land instead of Moonlight as best picture. Yes, the now infamous envelope mixup and the crazies that ensued. (Infamous isn’t a word that should be used in describing events at the Oscars, but we’ve used it twice now.)

With both producers and actors from both movies standing on stage along with presenter Warren Beatty, feeling strange and humiliated, Kimmel broke the tension with his, “Warren, what did you do?” while a fairly miserable Warren Beatty tried to explain the mix-up. As it turned out, the accountants backstage had given Beatty the wrong card. And while it was perhaps the most awkward Oscar moment in history, everyone was incredibly gracious.

It seems in spite of the fiasco that took place during the 2017 Oscars, not only is Kimmel returning, but producers Michael De Luca and Jennifer Todd are as well. We all imagined a producer or two might lose there job over that one, right? But why should they when it was two top executives from the prestigious PricewaterhouseCoopers (PwC) accounting firm that caused the screw up?

The Daily News reported March 1 that Brian Cullins and Martha Ruiz were the responsible parties and that they have now been banished for life from Hollywood’s most prestigious event by the Academy of Motion Picture Arts and Sciences.

It should be noted, as reported by the Los Angeles Daily News on February 27, that PwC, who has handled the balloting process at the Academy Awards for 82 years, managed to keep this boondoggle of a gig in spite of causing the Academy’s most humiliating moment. I imagine they will implement safety nets to prevent such an egregious error from happening again since I also imagine that with two strikes they will be out of such a posh position with the Academy. So let’s assume that’s been fixed.

And that’s how the 2017 Oscars ended, so who’s to judge? A lesser host might still be on stage twiddling his fingers scolding a legendary actor. However, Kimmel and  the show’s producers managed the events of the evening with grace. Not sure how they can top that memorable awards show, but let’s say hurrah and look forward to the party.

Chances are you’ve heard what happened at the 2017 Oscars in detail. But Jimmy Kimmel gives a pretty good forensic look at what truly happened on his show Jimmy Kimmel Live the day after the Oscars. You should check it out.

History: Did you know that on this day, May 16, in 1929, the Academy of Motion Picture Arts and Sciences handed out its very first Awards? It was a completely different affair back then. In fact, the Awards were given out during a dinner party for about 250 people held in the Blossom Room of the Roosevelt Hotel in Hollywood, California. According to the History Channel, the Academy was the brainchild of Louis B. Mayer, head of the powerful MGM Studio. It was organized in May 1927 as a non-profit organization dedicated to the advancement and improvement of the film industry. Interesting facts about that First Oscar ceremony: