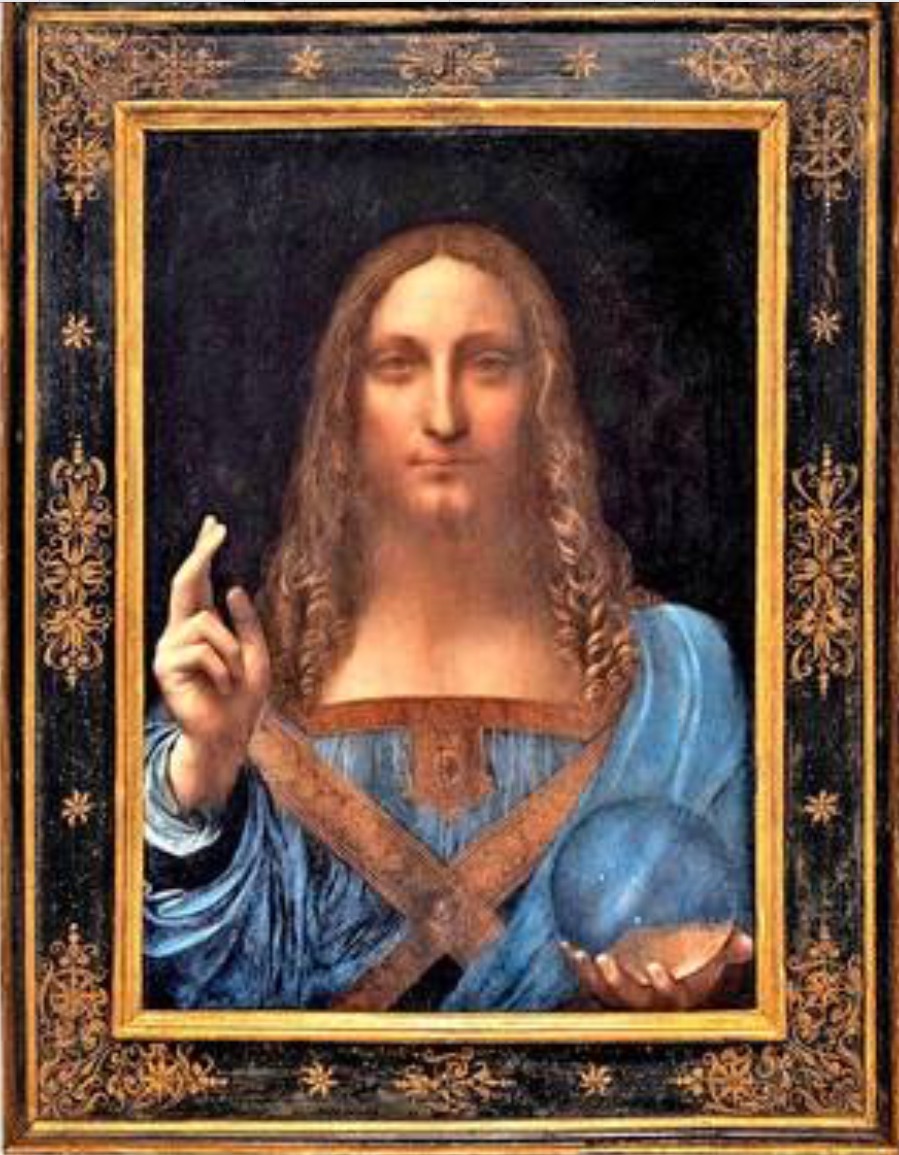 It dates back to around 1500, has an illustrious history and obliterated world records Wednesday when it sold for $450.3 million. Leonardo da Vinci’s Salvator Mundi, one of only 20 authenticated works of art by the Italian Renaissance artist, was sold at Christie’s Auction House in New York smashing and setting world records. It is the most expensive work of art ever sold and it is the only da Vinci owned by a private collector.

According to CNN, bids were estimated to be over $100 million for this rare painting. CNN said, “Original estimates had predicted bids of over $100 million for the piece. But the new record was set after approximately 20 minutes of telephone bidding, far surpassing the previous auction record held by Picasso’s Les Femmes d’Alger, which sold for $179.4 million in 2015.”

Da Vinci”s Salvator Mundi (Savior of the World) depicts Jesus Christ in Renaissance clothing with his left hand holding a crystal spher, the his right hand with fingers crossed raised in blessing. It is described to lack the detail of the Mona Lisa — though both were created about the same time.  Despite its lack of clarity, the 517-year-old painting attracted scores of people during pre-auction viewings in London, Hong Kong and San Francisco.

Salvator Mundi has a most illustrious history. Scholars believe Leonardo da Vinci began the painting between 1506 and 1513 while under the patronage of Louis XII of France. It was later owned by Charles I of England, recorded in his art collection in 1649. It was auctioned in 1763 by the son of the Duke of Buckingham and disappeared until 1900 when it was purchased by British collector, Francis Cook, 1st Viscount of Monserrate.

By this time, the painting had been seriously damaged from previous restoration attempts and was dismissed as a copy. Descendants of Lord Cook sold it at auction in 1958 for the paltry sum of  £45 ($59)!

The painting then disappeared again until 2005 when it was acquired for $10,000 by a consortium of art dealers. It had been horribly overpainted, making it look like a copy. It was described as “a wreck, dark and gloomy.” However, this group of art dealers saw through the debacle and mess, believing it might be the long missing masterpiece. And they were right. The group spent the next few years painstakingly restoring Salvator Mundi and it was finally authenticated.

Russian businessman Dmitry Rybolovlev then bought the painting in 2013 for $127.5 million. Da Vinci”s Salvator Mundi turned out to be a brilliant investment considering he tripled his money with the sale of this incredible and beautiful masterpiece.

Now the only question remaining is, “Who bought the Da Vinci masterpiece.”

“We do not comment on the identities of the buyers, I’m sorry,” said Christie’s CEO Guillaume Cerutti. “The bids came from every part of the world.”

However, speculation suggests a couple of likelihoods. According to a report by CNBC, some dealers say the buyer is likely an American, perhaps Amazon founder and CEO Jeff Bezos, since there is only one da Vinci in the U.S. Others say the price suggests it was a foreign buyer willing to pay anything to have a da Vinci in, say, China or the Middle East.

Watch a timelaspe video of the restoration of Salvator Mundi. Provided by Christie’s.