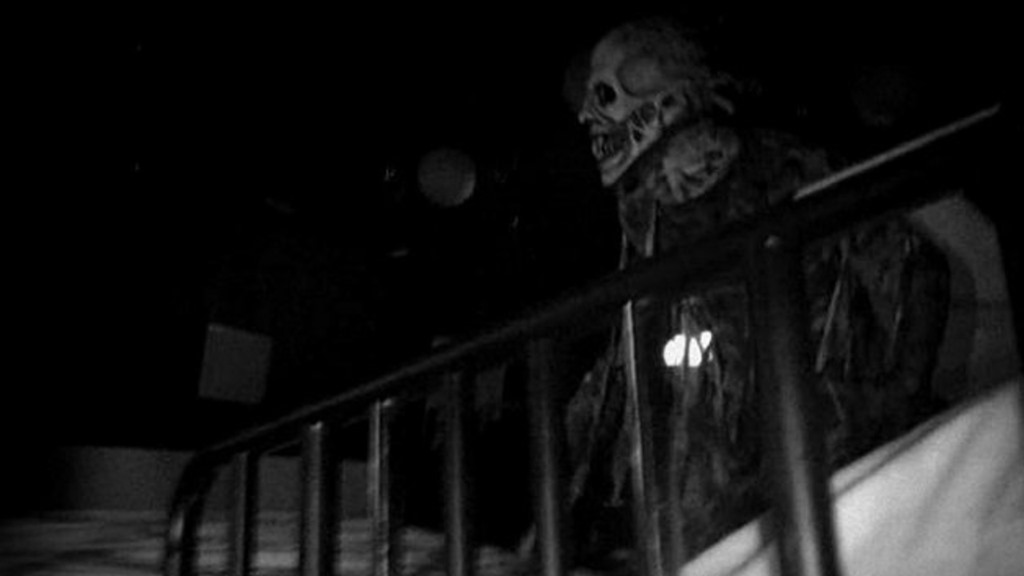 So, what are demons anyway? Are they, as most of the world’s major philosophies and religions have taught since the dawn of time, malevolent spirits actively working against mankind’s best interests? Or are they, as recent skeptics would have us believe, nothing more than fairy tales conjured up through a misunderstanding of mental illness? Or maybe they’re something else entirely, something we haven’t thought of yet. Well, the new found footage anthology, The Dark Tapes, may not offer a definitive answer as to what demons are, but it’s an enjoyably demented descent into demonology nonetheless.

Like most anthology films, The Dark Tapes begins and ends with a wraparound story. To Catch a Demon opens with a couple stumbling upon the bloody scene of what appears to have been a failed scientific experiment. Playing back footage from the onsite cameras reveal that a team of paranormal researchers had set up shop in the space to test their theory regarding demons. Believing such entities to be trans-dimensional beings perceptible only to humans in a state of sleep paralysis, the group prepares a number of devices specially designed to capture one of the creatures on film. The proceedings don’t go well.  With its mixture of monsters, relativity theory and pseudo-science, To Catch a Demon treads similar ground to John Carpenter’s Prince of Darkness, though obviously on a much smaller budget. Still, with direction and practical effects by veteran make-up artist Vincent J. Guastini, it’s a fine little creature feature. Wraparound segments are typically the weakest part of anthologies, so kudos to The Dark Tapes for bucking the trend.

The conceit of The Dark Tapes is that, along with their scientific equipment, the researchers from To Catch a Demon also had in hand a number of archival videos (all directed by newcomer Michael McQuown) showcasing supposed documentation of demonic activity . The first ‘tape’ we get to see is one for the skeptics out there, The Hunters and The Hunted. This story involves a group of paranormal experts who are called in to investigate after a young couple notices strange goings-on in their new home. The hapless hunters do indeed discover demons, but probably not the kind they were expecting. The bulk of this episode will likely seem all too recognizable to fans of the Paranormal Activity series, but viewers who stick it out to the end will be rewarded with a nice twist that more than makes up for the over familiarity.

Next up is Cam Girls, which follows the story of Caitlan, a young woman raised in a rigidly conservative household who has recently run off to the big city to live her new girlfriend, Sindy (yes, that’s the correct spelling). Together, the two girls earn money by running an online sex chat service in which they offer special private sessions to selected customers. While this new life full of eroticism excites Caitlan, she is also concerned about the mysterious blackouts she has been experiencing since hooking up with Sindy. And with good reason, as we soon learn when what goes on in one of those private sessions is finally revealed. As far as demons go, Cam Girls probably has the most traditional take on the subject, being full of warnings about the spiritual and physical consequences of engaging in certain illicit activities. Alas, it is also the bloodiest of the segments, so any thoughts of showing it during Sunday School is right out.

Finally, there is Amanda’s Revenge, in which the titular character begins to exhibit strange powers after being abducted every night by strange beings. Increasingly frustrated at her inability to halt the visitations, Amanda goes into training and comes up with a plan she is sure will put an end to it all. The results are mixed. This tale is a riff on the ideas of noted astronomer Carl Sagan, who famously suggested that tales of alien abduction are the modern day equivalent of ancient tales of demonic attack. The difference is that while Sagan concluded both types of stories are the products of a delusional mind, Amanda’s Revenge suggests that not only are both are the same thing, they both are also all too true. So, this segment is probably not the one for any Sagan fans out there. Who it is for, though, are those who want to see something a little different in a found footage movie. Because Amanda’s tormentors disrupt anything electronic, she can’t record them with any of today’s equipment. Instead, she utilizes cameras and recording paraphernalia from the first part of the 20th Century, and the resulting imagery is quite unique for the genre.

Overall, The Dark Tapes is a solid recommend. Unsurprisingly, it does suffer from some of the usual pitfalls found in no-budget movies such as sparse set design and occasionally spotty acting. However, there are no real deal killers. And while it’s “all of the above” approach to theories regarding the demonic may not provide any final answers as to which one is the most accurate, the movie does ultimately arrive at the most important conclusion. Demons, whatever they may be, are out there, and it would be unwise for mankind to forget that.

The Dark Tapes can be viewed starting April 18th on most of the popular Video On Demand services.