Room 237: “Academic BS” At Its Most Enjoyable

Home The Horror! Room 237: “Academic BS” At Its Most Enjoyable 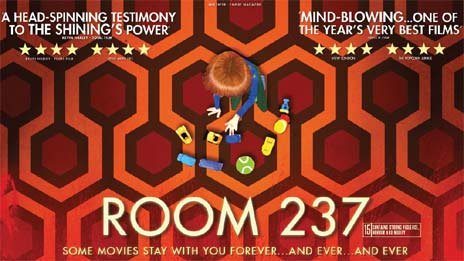 Room 237: “Academic BS” At Its Most Enjoyable

With The Shining making its way back into theaters this weekend, it’s as good a time as any to revisit Room 237, Rodney Ascher’s ode to the cult of film theorists surrounding Stanley Kubrick’s horror classic. Film theory, sometimes referred to as academic criticism, digs deeper than a general movie review so as to ferret out a film’s underlying themes and understand their relationship to the larger society. Few film theorists have dug deeper than the ones featured in Room 237, and whether you find their efforts to have merit or, as Stephen King declared, to be nothing more than an exercise in academic BS, their musings are never anything but enjoyable.

Chances are you’ve seen The Shining, but if not, the story is a simple one. Recovering alcoholic Jack Torrence, accompanied by his wife Wendy and son Danny, accepts a position as the winter caretaker of The Overlook Hotel in the hope that the isolated locale will allow him to complete his first novel. Before leaving the family alone for the season, the hotel’s chef warns the psychic Danny that the malicious hotel may show him frightening mental images, but to ignore them because they aren’t real. Unfortunately, as the winter progresses, it becomes clear that the malevolent forces present in the hotel are assaulting Jack’s mind as well, and the effect they are having on the man’s already tenuous grasp on sanity can bode nothing but ill for Wendy and Danny. Eventually the axe comes out.

Stanly Kubrick is an acknowledged genius of the cinematic art form, and The Shining is as meticulously crafted as any of his films. His signature protracted wide-angle tracking shots, his masterful use of symmetrical one-point perspective, the overall feeling of coldness and sterility that pervades his films; they’re all on display in The Shining. And because Kubrick is Kubrick, there’s obviously more going on in the film than the simple story of a mother and child locked in a hotel with a madman.

Whether they are a devoted fan or a vociferous detractor, most critics agree the central theme of The Shining is the disintegration of the traditional family unit. Jack obviously blames his unfulfilled artistic aspirations on his wife and child. The mousy Wendy (she literally looks like a mouse) makes excuses for her husband rather than acknowledging any problems. Danny, not without good reason, completely fears and distrusts his own father. The Torrence family is broken long before it enters The Overlook. That’s why, when confronted by one of the hotel’s spirits, Jack is told he has always been there. The hotel is only manifesting the wrongness that has been brought into it.

Some theorists aren’t content to stop with that interpretation, however, and that’s where Room 237 comes in. Have you ever considered the possibility that The Shining is actually a scathing indictment of the atrocities committed against Native Americans? What about the notion that the film represents Kubrick’s cryptic confession that he participated in the faking of the Apollo 11 moon landing? Perhaps the film is a veiled reflection on the Holocaust, or maybe even a modern retelling of the ancient myth of Theseus and the Minotaur. All these theories and more are given ample discussion in Room 237.

In truth, Room 237 is more of an exploration of film theory than it is The Shining itself. As such, a viewer’s enjoyment of the documentary may be greatly influenced by their tolerance for listening to inveterate film nerds discuss such things as the possibility that a paper holder on The Overlook Hotel manager’s desk represents an erection. Understandably, such a thing is not for everybody. As for me, given that I regularly spend time at my own site, The B-Movie Catechism, reading religious meaning into decidedly non-religious movies under the assumption that all stories in some way reflect the greatest story, I tend to give such musings a sympathetic ear.

Understanding film theory is certainly not a requirement for enjoying movies, especially horror-themed ones. Roger Ebert famously never had so much a single course in the stuff when he was appointed the film critic for The Chicago Sun-Times. He did, however, pick it up over the years and it deepened his enjoyment of movies immensely. So why not hop over to Netflix and give Room 237 a try. If you don’t like what you see and hear, it’s easy enough to dismiss it all as nonsensical BS as Stephen King did. But there’s also the chance it could reinvigorate your interest in a venerable old classic. Who knows, the next time you run across The Shining on TV and it gets to the scene with the paper holder, you just might find yourself thinking, “Maybe, just maybe…”