Home The Horror! Turner Classic Movies Has What Horror Fans Are Looking for this Halloween 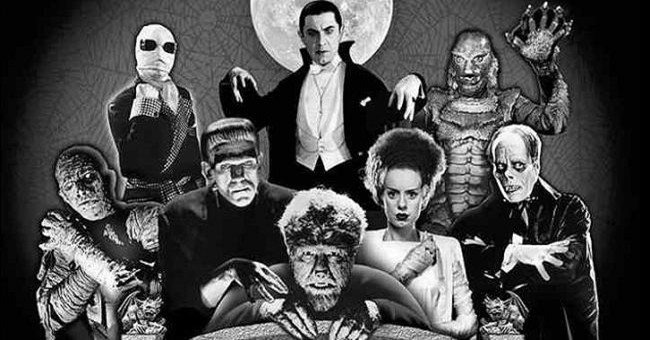 In a 2004 paper published in the Journal of Media Psychology, Dr. Glenn Walters suggests there are three primary factors which make horror films so enticing to certain viewers; tension, relevance, and unreality. Well, whatever the specific attraction, October is a busy time for us horror fanatics. Armed with multiple cable channels and limited DVR space, we scour every available television schedule, meticulously plotting methods to maximize the number of scary flicks to be recorded. It’s often a difficult task as every other network out there seems to be running a month-long movie marathon in celebration of All Hallows’ Eve.

One of the worst offenders is Turner Classic Movies, who every year unleashes dozens of fright films from their vaults in the weeks leading up to Halloween. For traditionalists it’s a dream come true, as this year’s line-up dishes up liberal doses of vintage Universal and Hammer horrors. But along with all the Draculas and Frankenstein Monsters, TCM also has a few obscure offerings airing during the wee hours of the morning that should more than provide those necessary elements horror connoisseurs are clamoring for.

For tension, Mad Love (airing October 8 at 7:30 AM) should more than fit the bill. When concert pianist Stephen Orlac loses both hands in an accident, his wife Yvonne takes him to brilliant surgeon, Dr. Gogol (Peter Lorre!), for transplants. Unfortunately for the young couple, Gogol becomes obsessed with Yvonne and concocts a scheme to take her for himself. He replaces Stephen’s delicate digits with those of a deranged serial killer and then convinces the artist that his new extremities wish to continue their murderous ways. Reality and fantasy begin to merge and it is only in the end that the truth of what is really going on is revealed. Peter Lorre in one of his finest performances is reason enough to watch Mad Love, but the look of the film is pretty nifty as well. A remake of the silent German classic, The Hands of Orlac, Mad Love is proof positive that Hollywood can (or at least once could) produce works of expressionism on a par with the country that invented the art form.

It’s Alive (airing October 29 at 11:00 PM) may seem like an odd choice for relevance, but bear me out. Despite its dubious premise of a mutant killer baby, It’s Alive is actually a pretty solid little B-movie with a surprising amount of heart and thought put into it. John P. Ryan’s performance as the father of the titular terror rises far above what the material calls for, and Larry Cohen’s script offers some compelling food for thought if you take the time to consider the era it was conceived in. Released barely one year after the Roe v Wade decision, the story can’t help but reflect the cultural conflicts being waged over contraception and abortion in the wake of the sexual revolution. More shocking is that the narrative doesn’t always favor the side of the argument one might expect from a Hollywood production. Silly at times, but interesting nevertheless.

Now when it comes to unreality, nothing is more appropriate than House (airing October 10 at 2:00 AM). No, this is not the goofy horror/comedy from the mid-80s starring William Katz (not that there’s anything wrong with that). Hailing from the Land of the Rising Sun, 1977’s House is probably unlike most anything you’ve seen before. Ostensibly about a Japanese schoolgirl named Gorgeous who travels with six friends to spend Summer break at her aunt’s house in the country, what House is really about is anyone’s guess. Some suggest it’s a coming-of-age fable, ala Labyrinth, about a young girl’s difficulties transitioning from adolescence to womanhood. Others suggest it’s just utter nonsense. Whatever the case may be, from the image of a disembodied head flying out of a well and biting one of the teens on her derriere to the spectacle of another girl being eaten by a piano, House is guaranteed to be one of the strangest horror flicks you will ever see.

So, as you can see, be it tension, relevance, or unreality, whatever it is that drives some of us to seek out horror films, Turner Classic Movies has it covered this October. Ah, but what about those films that don’t meet any of those criteria? Not to worry, bad movie lovers, the fine folks at TCM haven’t forgotten that some folks actually enjoy suffering through the worst Hollywood has to offer (I wonder what Dr. Walters would have to say about that?).

You know how sometimes an idea sounds weird on paper, but once it’s put to film it all comes together to make something interesting? Well, Hillbillys in a Haunted House (airing October 15 at 3:00 AM) is NOT one of those ideas. There are really only two reasons to watch this movie, and neither of them have anything to do with a good story, good acting, or anything else you can attach the word good to. The first is the sheer novelty of seeing horror royalty the likes of Lon Chaney, Jr., Basil Rathbone and John Carradine teaming up with country singing sensations such as Ferlin Husky, Sonny James, and Merle Haggard. Face it, there will never be another opportunity to watch The Wolfman and The Okie From Muskogee share screen time, so you may as well take advantage of this one. The second reason is that Hillbillys in a Haunted House also features George Barrows and his legendary gorilla suit. You may have already run across George as the Robot Monster or the Gorilla at Large or as any number of other noteworthy apes on film and TV, so why not be a completest and watch him here. There may be no tension, relevance, or unreality, but what else do you have to do at 3:00 in the morning anyway?