“Tucker and Dale vs. Evil”: Hillbilly Horror and the Perils of Misconceptions

Home The Horror! “Tucker and Dale vs. Evil”: Hillbilly Horror and the Perils of Misconceptions 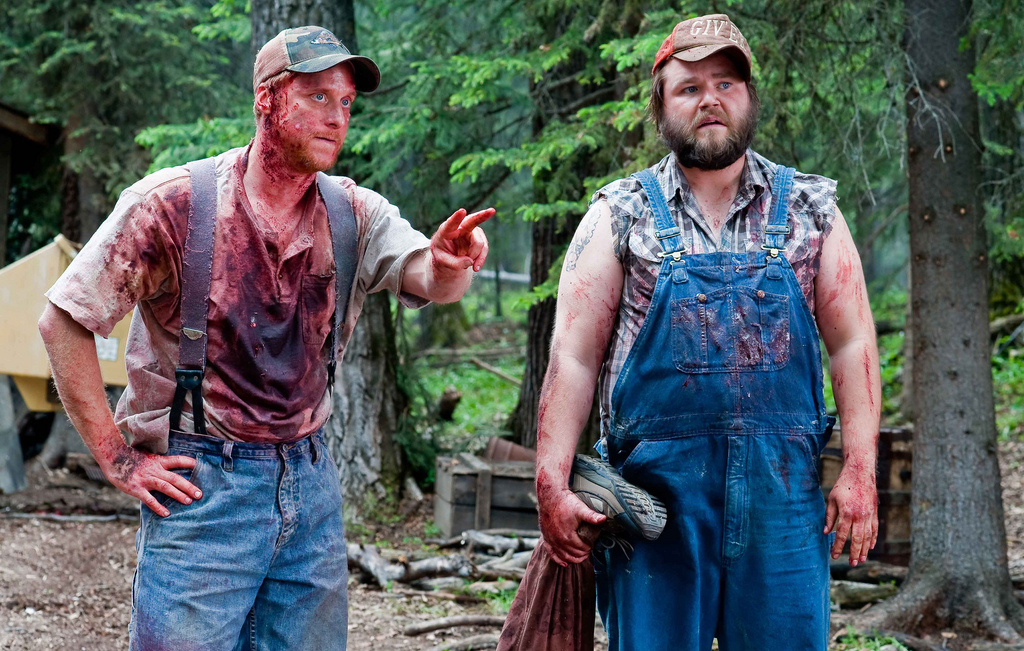 “Tucker and Dale vs. Evil”: Hillbilly Horror and the Perils of Misconceptions

City folk have always been a little leery of what lies beyond the suburbs, and after spending the early 70s watching Leatherface dance jigs with a chainsaw and Ned Beatty get forced to squeal like a pig, one might expect no self-respecting modern urbanite would be caught dead outside the city limits. According to Hollywood’s hillbilly horror movies, however, dead is exactly the way they can be caught in the countryside, at least if the local yokels have anything to say about it.

In her book, Post-9/11 Heartland Horror: Rural Horror Films in an Era of Urban Terrorism, author Victoria McCollum, PhD notes, “The rural has loomed large in the popular imagination for some time and has served as a vast repertoire for cinematic terror. Considered the provincial cousin of the American slasher film, and a lower form of ‘quintessentially low’ cinema, the politics of ‘hillbilly horror’ are said to lay bare the flipside of popularly constructed rural idylls. In doing so, American rural horror of the 1970s exposed the onerous impact of social, cultural and economic processes on rural regions in the United States.”

But whatever socio-political relevance hillbilly horrors may have held in the 70s, it had all but vanished come the new millennium. By the time such films as Wrong Turn arrived, backwoods bad guys were serving a less lofty purpose. As the fine folks at the TV Tropes website explain, hillbilly horror “too often crosses into unfortunate implications and is swiftly falling into being a discredited trope, as the social construction of the ignorant hillbilly has been compared to blackface in terms of being an unfounded stereotype used to make people living in cities and the suburbs feel better about themselves.” In short, politics has given way to prejudice.

Now, when it comes to dealing with an evil like unwarranted bigotry towards bumpkins, or any evil for that matter, there are a lot of ways to combat it. One of the most successful approaches, however, is to ridicule it. As St. Thomas More once said, even the Devil himself cannot endure to be mocked. Well, nothing mocks hillbilly horror better than Tucker and Dale vs. Evil.

As is the custom in the genre, the movie begins with a group of mostly obnoxious college kids headed into the wilderness for some camping and drinking, though more of the latter than the former. Stopping at a small country store to restock their beer supply, the kids bump into Tucker (Alan Tudyk) and Dale (Tyler Labine), two happy-go-lucky hicks on their way to a newly purchased vacation shack in the woods. The bashful Dale is immediately smitten with one of the girls, Allison (Katrina Bowden), and though he assumes she would never be interested in someone with his appearance, he gives in to Tucker’s urgings to go introduce himself.

Unfortunately, upon approaching Allison, all the socially awkward Dale can manage is a few incoherent mumblings. No doubt having seen Wrong Turn (not to mention Wrong Turn 2: Dead End, Wrong Turn 3: Left for Dead, Wrong Turn 4: Bloody Beginnings, Wrong Turn 5: Bloodlines, and Wrong Turn 6: Last Resort), the young campers immediately assume the flustered Dale is some sort of semi-mute backwoods maniac and chase him off.

As fate would have it, Allison and her pals decide to setup camp not too far from Tucker and Dale’s cabin. That evening while fishing, Tucker and Dale observe Allison bump her head and fall into the lake. The pair manage to pull the unconscious girl from the water, but when they try to call out to her fellow campers for help, their cries of “we’ve got your friend” are mistaken as hostile. Assuming Allison has been kidnapped, the rest of the kids make plans to rescue their friend from being tortured or eaten or whatever it is the movies say hillbillies do to interlopers in their territory.

Frightened upon first awakening, Allison quickly discovers that Tucker and Dale are actually nice guys who have only her best interests at heart. But before she can communicate this discovery to her friends, the terrified twenty-somethings launch an attack (of sorts) on the cabin. In the chaos that ensues, one of the boys manages to gruesomely impale himself on a log. Once again assuming Tucker and Dale are responsible, the remaining kids vow vengeance on the confused clodhoppers.

To reveal more would be to ruin a lot of the fun. Suffice to say that the remainder of Tucker and Dale vs. Evil is “splatstick” at its finest as both the mutual misunderstandings and the bloody body count continue to rise. With likable leads in Labine and Tudyk, a pitch-perfect mix of humor and cartoonish gore, and plenty of lighthearted jabs at the underlying provincial undertones of the hillbilly horror genre, Tucker and Dale vs. Evil is one of the finer horror-comedies of the past decade. Even most city folk might agree.