“Stranger Things”: The Power of Three

Home The Horror! “Stranger Things”: The Power of Three 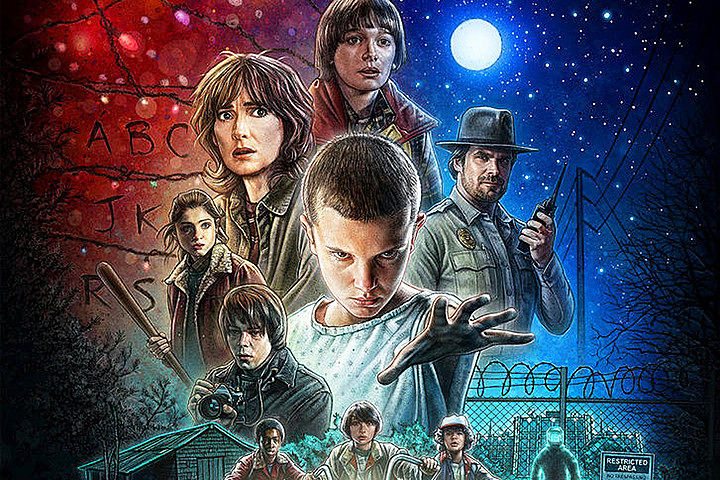 “Stranger Things”: The Power of Three

If you listen to the Duffer Brothers, the creative minds behind Netflix’s much-acclaimed paean to 1980s horror films, Stranger Things, you would have to believe there is some validity to the old Latin idiom “omne trium perfectum,” or everything that comes in threes is perfect. That’s because, even though Stranger Things so obviously draws inspiration from just about every movie to ever come out of the 80s, the Brothers credit three artists in particular with providing the primary thematic elements of their show. Perhaps you’ve heard of them; Stephen Spielberg, Stephen King, and John Carpenter?

Emulating Spielberg might seem like an odd choice for the show as his is not a name one immediately associates with horror. However, keep in mind that along with his trademark sense of awe and wonder, Spielberg’s early productions also brought an air of legitimacy to subject matter that had up until then been confined mostly to the realm of exploitation films. Poltergeist, for instance, was a ghost story which featured a man ripping his own face off, but Spielberg’s involvement made such a thing respectable for mainstream movie audiences.

For Stranger Things, the Duffers have placed the adults in their show in a trademark Spielbergian situation. After the disappearance of her youngest son, Joyce (Wynona Ryder) is confronted with the undeniable truth that there are mysterious forces at work. This realization causes her to engage in activities deemed insane by those around her, things like building a paranormal communications set out of Christmas lights in her living room. And much like the beleaguered Roy Neary in Close Encounters of the Third Kind (on whom she is clearly modelled) or Sheriff Brody in Jaws, Joyce eventually gains an ally in the town’s chief law officer, Jim Hopper (David Harbour), and the two soldier on to solve the mystery despite the efforts of others to coax them back to “reality.”

King’s contribution to the tone of the show is a bit more obvious. The central conceit of many of the author’s stories is the notion that the scariest things in life are actually to be found on the very street you live on. In his twisted universe, vampires and werewolves are your next door neighbors and the greatest of evils lies just beneath the face paint of a clown. King was hardly the first author to touch on such ideas, but nobody popularized them the way he did.

The show cleverly acknowledges the ubiquitous of King in the 1980s by having its title sequence use the exact same font which adorned the paperback covers of King’s novels found in every supermarket checkout line of that decade. More importantly, the show places its pre-teen cast in an ordeal drawn directly from one of King’s most prominent works, It. In Stranger Things, it is the three young boys who first understand the otherworldly nature of the threat to their town, and it is they who initially rush headlong into conflict with the monster to try and save their missing friend. Adding to the King-ness of their plight, the boys are joined in their efforts by a strange young girl named Eleven (Millie Bobby Brown ) whose special abilities would make her feel right at home in the pages of King’s Firestarter.

As for Carpenter, along with his ultra-cool synthesized soundtracks, he provides perhaps the most necessary ingredient when it comes to making a successful 80s horror; a sense of unabashed fun. No matter if his film was about a strange fog full of ghosts or a slimy shape-changing alien, Carpenter never forgot that it was all just a thrill ride. It is this sensibility above all other things that gives the horror films of the 1980s their distinct feel. Sitting as they do between the apocalyptic doom and gloom of the 1970s and the grim nihilism of the late 1990s/early 2000s, the terrors of the 1980s come across these days as downright playful by comparison.

It is the teenagers in Stranger Things which inhabit Carpenter’s world. Change the monster to a masked killer and they could just as easily be on the set of Halloween. Blinded by adolescent urges, they are nearly oblivious to the rest of the world around them, and trying to get the boy or girl of their dreams is just as important (maybe more so) as dealing with the threat that is trying to claim their lives. No monster is going to stop them from sneaking out to a party with their friends.

For diehard horror aficionados, there are of course plenty of other names besides Spielberg, King, and Carpenter which hold equal importance to the formation of what would become the horror renaissance of the 1980s. Names like Hooper, Romero, Argento, Craven, as well as many others, loom large in the decade, and Stranger Things just about references them all. But for mainstream audiences, the Duffer Brothers have likely chosen their trinity well. Mirroring the relationship found in the Holy Trinity, the works of Spielberg, King, and Carpenter each have their own distinct voice and speak to us on different levels, but together they form a completeness that breathes life into the world of Stranger Things. It works so well that it seems almost impossible that no one has thought to combine elements from these three before into a single cohesive story. But work it does, and it makes Stranger Things one of the few must see horror events of the year so far.