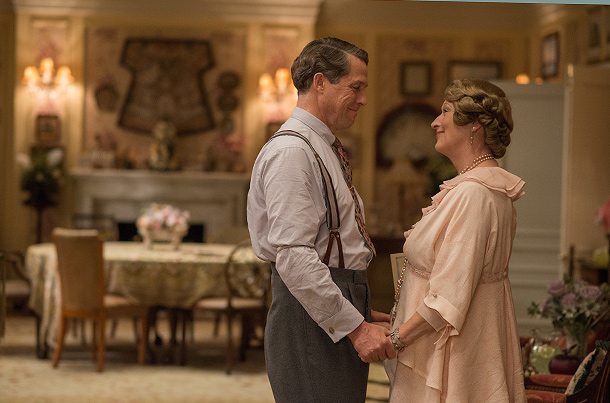 Critics are raving about the comedy Florence Foster Jenkins starring Meryl Streep. It’s filled with so much joy and passion for life.

In fact, Streep revealed to WSJ Magazine, that joy was the primary reason she chose this project.

WSJ reports: “As played by Streep, Jenkins is driven by a force more powerful than vanity, as if her entire life—simultaneously privileged and tragic, with the specter of death a constant companion—was animated by the joy of singing.

“‘Her personal challenges,’ Streep says of her alter ego, ‘what was stalking her in her life, made her make a decision to live every second deeply, intensely and to her joy.’

“That, in turn, drove Streep’s decision to make this movie: ‘To choose the one that chooses joy—and there are a lot of reasons to go and to explore the endless dystopian vortex into nihilism—is saying, Music matters, love matters. What’s the value in being alive right now? It’s saying, “There is value.” That’s in there.’

“Streep calls Florence Foster Jenkins ‘one of the most fun things I’ve ever done, without question,’ and makes no excuses about having chosen the project simply because it would be enjoyable.”

Brian Viner for the Daily Mail calls the movie “Awesomely awful” and said that Streep played the role of Florence Foster Jenkins “sublimely in this charming and funny film.”

Viner continues, “But Jenkins… did not acquire her illustrious following by being good. Rather, it was by being extremely bad, though of course she didn’t know it. Indeed, no soprano has ever given more of herself, or had less to give.

“An heiress wealthy enough to hire Carnegie Hall one memorable night in 1944, she warblingly held the audience in her thrall, cheerfully unaware that they were suppressing their mirth as she sought and comprehensively missed the right key. All this is ripe for comic interpretation, but director Stephen Frears, working from a fine screenplay from fellow Brit Nicholas Martin, has sensibly resisted the temptation to squeeze too hard.”

At a time filled with conflict and turmoil at home and abroad, a little joy and laughter goes a long way.