Keith David in “Greenleaf”- The Best Preacher Ever on TV 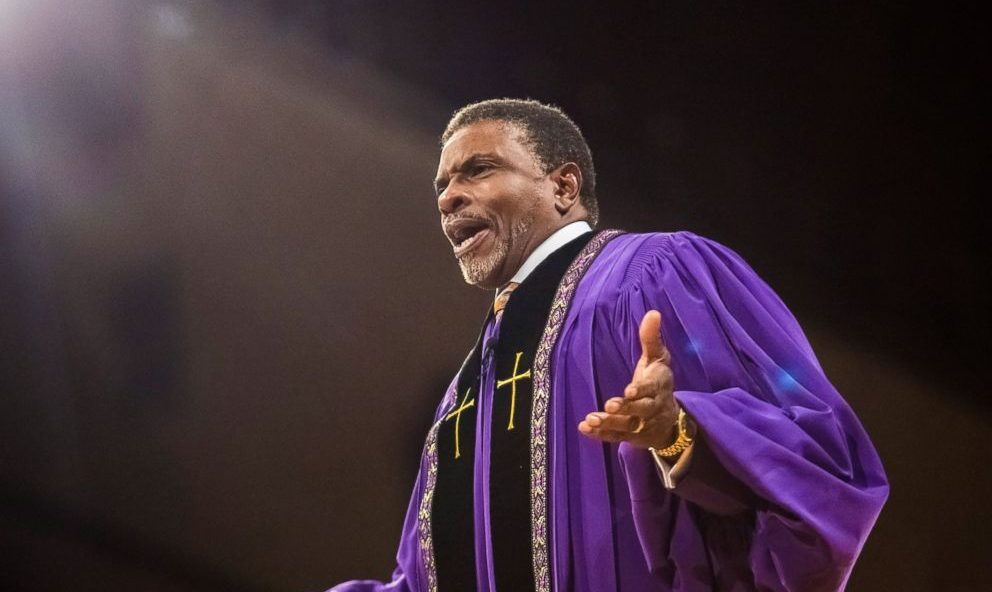 Keith David in “Greenleaf”- The Best Preacher Ever on TV

After shooting his brother-in-law, Mac, in the shoulder, Bishop James Greenleaf (Keith David) is now coping with the fallout from the violence and its cause: Mac’s serial sexual abuse of underage girls, including the bishop’s own daughter, Faith.

Despite the role Grace played in exposing the truth about Mac, Bishop Greenleaf and Grace are alienated. He cannot forgive her for going immediately to the police about Mac; if she had only given him a little time, as he asked, what could have been “merely scandalous” wouldn’t have become “cataclysmic.”

These are only the major story complications in the weekly hour-long drama, Greenleaf. Power plays and sexual tensions abound.

This summary makes the series sound like the fulfillment of its advance publicity, which promised plenty of scandal involving an African-American clergyman, his dynastic family and their mega-church.

The PR campaign foreshadowed so much mendacity that the show’s producer, Oprah Winfrey, felt compelled to call TD Jakes, America’s most popular African-American pastor, with assurances that the show was not based on him.

The audience could be forgiven for expecting Greenleaf to be Elmer Gantry turned into a nighttime soap opera—a story about a con artist masquerading as a man of God in order to fleece the rubes out of their shekels. All the while living in luxury, of course.

Greenleaf has turned out to be far better than its advance publicity; in fact, it’s been one of the most enjoyable shows this summer.

Much of the credit goes to Keith David, whose superb performance as Bishop James Greenleaf brings a genuine, larger-than-life American character to television.

In fact, I think Bishop Greenleaf is the best clergyman ever depicted on TV.  I’m not sure another character even comes close. Father Mulcahy in MASH endeared himself but was rarely called upon for more than comic relief.

Keith David’s bishop brings to Greenleaf a clergyman who has a thorough knowledge of the Bible, an appreciation for the Christian tradition, and a genuine, if sometimes troubled, faith. In other words, he’s actually like the many pastors in real life of similar standing.

[infobox maintitle=”I do not believe that we have a punishing God, but we do have a God of accountability.” subtitle=”- Keith David” bg=”gray” color=”black” opacity=”on” space=”30″ link=”no link”]

David brings to the character wit, charm, worldly wisdom and a personal charisma that he relies upon as a great athlete does his natural physical prowess. He gives to the material a moral depth that keeps us from any easy presumptions about his motives; we are never entirely sure when he’s being a man of the cloth versus simply being a man.

Keith lifts Greenleaf out of soar opera territory into the realm of genuine drama.

Credit is due as well, of course, to Greenleaf’s show runner, Craig Wright, who also developed Tyrant and wrote episodes of Six Feet Under and other acclaimed series.

Keith David graciously consented to be interviewed about his role in Greenleaf. The following interview was conducted through exchanging emails and audio files.

First, I want to know how Keith David thinks about Bishop Greenleaf’s faith. Is he truly a man of God?

“Yes, with all the bishop’s flaws as a man, he is a man of God,” David says. “He’s also a man of family, his personal family, as well as his church family. That is the part of his integrity he’s unwilling to compromise.”

David then speaks to the crisis of faith and personal integrity that occupies most of the first season. “The crossroad the bishop has come to involves turning his back on certain things. As a man rises to power, who is given to earthly things, and getting used to that, I think he has let some things slip.

“The most important of which is in dealing with his daughter, Faith, and the question of was she or was she not a child of abuse. When the issue first came up, he in fact asked her about it. Is your uncle inappropriate with you? In her embarrassment, she said no. And I chose to believe that.

“Now he believes he should not have let that go. He’s being held accountable. I do not believe that we have a punishing God, but we do have a God of accountability.”

I ask how the bishop deals with the contradictions of his beliefs and his own flaws. Is he one to rationalize, compartmentalize, or use other strategies of bad faith?

Keith David response shows his insight into how we all keep our failings at arm’s length, and a defensiveness in which his great love for the character comes through.

“How does he manage to cope with his inner contradictions? His ‘bad faith.’  Well, that would be your characterization of his actions. I don’t think he has bad faith. I think that you might say there are times when his faith is expedient. He’s a man, given to all the frailties that men have.

“And I think that even sometimes a man of God has those times when he has a moment of amnesia,” David says and laughs. “And thinks that God is not going to see this particular action or be aware of this thought. And if he allows himself to act out those things, eventually he has to be held accountable.  I think for the bishop there’s a big issue of accountability.”

I wanted to know in particular about his dealings with the IRS. The show has been signaling that all may not be right with the bishop’s taxes.

For context, here’s a clip where the bishop and Mac have a showdown about an impending IRS audit.

“Well, there’s another part of his lower humanity showing where he’s just going to wield his personal power. And say, no, you can’t look into my personal business in that way. Knowing that it would expose some things that he doesn’t want to be exposed.

“Some of those things are those little questionable points. Like, for example, the law might say that if a parishioner gives me a personal gift, if someone gives me fifty dollars for my birthday, than I’m supposed to report that. I would canvas half of the clergy of any faith. If they get a cash gift, do they report it all, and would you?”

As he turns the question on me, his baritone voice rumbling as I imagine God’s does, I realize how much I don’t want to answer that—neither to God nor the IRS.

[infobox maintitle=”I feel like in a way acting is my ministry. Because I have to draw my inspiration from the God of my understanding.” subtitle=”- Keith David” bg=”gray” color=”black” opacity=”on” space=”30″ link=”no link”]

Finally, I want to know how much of his own experience he brings to the part.

“I used to want to be a preacher,” Keith David says. “And I’m fortunate enough to be friends with and acquaintances with many other ministers. I seek out their advice about life as a minister.

“In almost every case, they admit they are a man or a woman, who are given to human thoughts. But we go back to our faith in God to help us make the most right choice at any given moment.

“I call upon those experiences all the time, and it does serve me in my performances. I feel like in a way acting is my ministry. Because I have to draw my inspiration from the God of my understanding. And you know, I fell like what we do as artists, in fact, is a kind of ministry.

“The theater started in church, with church rituals and acting out plays and stories in church. I mean, that’s how I certainly started. So yes, I draw on those personal experiences, and I pray a lot.” With that he laughs the rueful laugh of a man who does pray a lot and knows why.

If you are in Los Angeles this fall, you can catch Keith David in August Wilson’s “Ma Rainey’s Black Bottom” at the Mark Taper Forum, September 11 – October 16.

Harold Fickett is the Publisher of Scenes.