It’s been six years since the release of The Voyage of the Dawn Treader, and Narnia fans finally have something new to look forward to

It’s been six years since the release of The Voyage of the Dawn Treader, and Narnia fans finally have something new to look forward to. The Mark Gordon Company and C.S. Lewis Company have partnered with Sony Tri-Star Pictures and Entertainment One (eOne) to produce The Silver Chair.

Mark Gordon promises an entirely new series from the last trilogy which declined in popularity with each sequel.

Slash Film reported yesterday, “After plenty of rumors and development updates, producer Mark Gordon revealed earlier this year the next sequel is a reboot following new characters, starring new actors, and will be made by a new team. Leading that new team is Sony’s TriStar Pictures.”

No director or cast members have been named, but according to Slash Film, “David Magee, who adapted Finding Neverland and Life of Pi, is writing the script.”

According to Deadline, TriStar head Hannah Minghella intends to produce “literary properties that will travel” and she’s been a long-time fan of The Chronicles of Narnia. 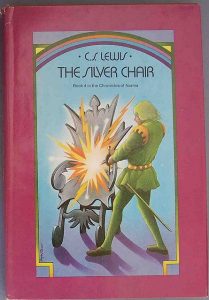 “Minghella grew up loving the books. ‘Reading The Chronicles of Narnia was one of the formative experiences of my childhood, just as it has been for children around the world for generations,’ she said in a statement. ‘To have the opportunity to bring new life to the Narnia films with a new creative team is a career highlight. Our mission is to build TriStar Pictures as a home for filmmaker-driven literary and commercial movies, and this film represents a huge step forward for us. We’re thrilled to be working with Mark, Doug, Melvin, Vincent, and David as we adapt The Silver Chair.’

“David Gresham, the stepson of the late author Lewis said ‘It’s been both fun and exciting to work with Mark Gordon and David Magee to develop the next Narnian movie, and now it’s a thrill to welcome Tristar to our Narnia family. I greatly look forward to plunging again into the joys and challenges of once more bringing Narnia to the screen, this time with the wonderful story of The Silver Chair.’”

We hope Gresham’s involvement in the project will ensure that the new rendition of The Silver Chair will stay true to C.S. Lewis’ classic work.

Written By
The Editors
Read More
Read Less
More from The Editors
Capitalism changed everything. It exposed our entrenched assumptions about class as largely...
Read More