Home Movies The Miracle of “Woodlawn” 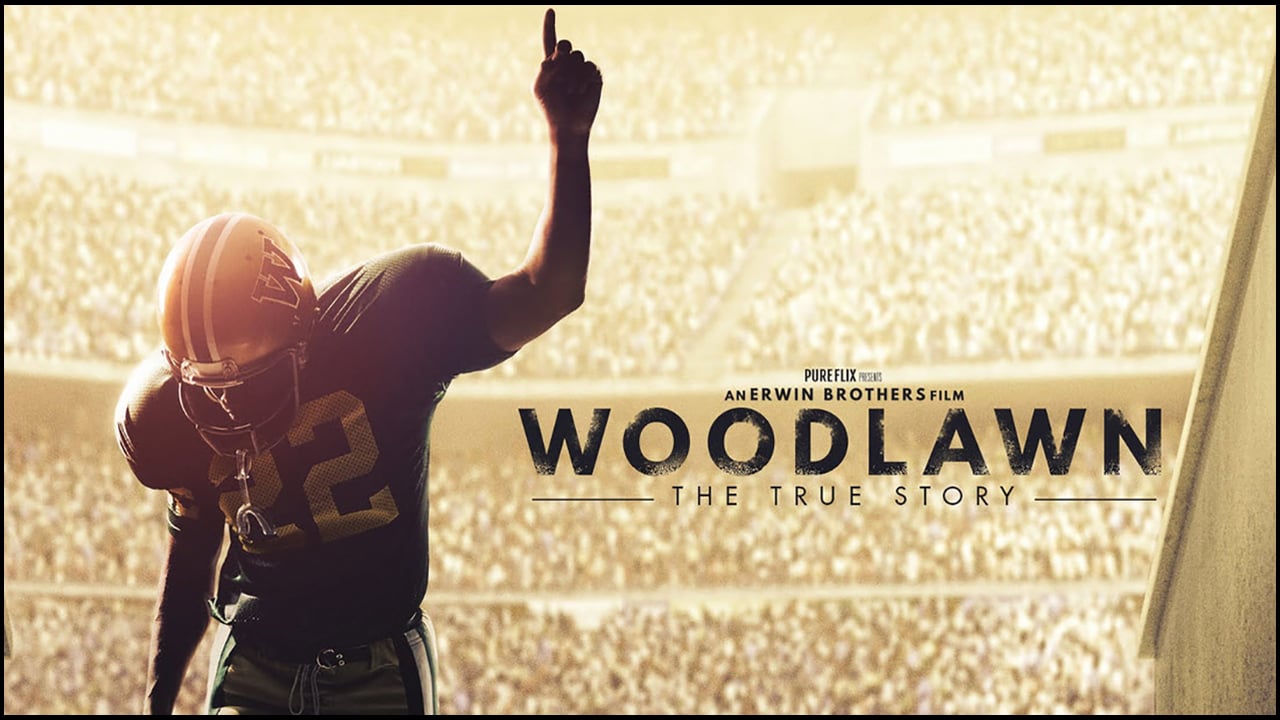 Those with a Christian bone in their bodies will find themselves tearing up, perhaps repeatedly, watching the inspirational film, Woodlawn. It’s a powerful film, if you are prepared to let it be.

The film combines the underdog elements of Hoosiers with the racial tensions of Remember the Titans and wraps it all up in an early-seventies Jesus Movement package.

In contrast, secular people may find the film infuriating, and that’s understandable, too.

Woodlawn is based on a true story about a recently integrated high school in Birmingham, Alabama. The coach of the football team, Nic Bishop (Tandy Geralds), explains why shootings have become more common than assemblies. 500 students are being bussed to a school they don’t want to attend where they are met by 2,500 students who don’t want them there, either.

The story pivots when an aspiring sports chaplain, Hank (Sean Astin), approaches the coach and says boldly that he’d like to talk to the team about “Jesus Christ.” The request seems outlandish, but, after the next shooting, not knowing what else to do, the coach gives Hank his chance.

Hank asks the team if they aren’t tired of the anger, hate and violence. Might they be willing to explore a better way, as followers of the one who proclaimed himself “the way, the truth, and the life?”

To the coaches’ astonishment—and somewhat to ours—nearly the entire team converts on the spot.

Their Christian commitment soon brings the players together as a team, and unites the student body, both black and white, in their enthusiasm for a team that suddenly starts winning.

The story gradually centers in Tony Nathan (Caleb Castille), a hard working but—at first—contact-adverse running back. As to contact, “it hurts,” Tony says, in an endearing admission.

The real-life Tony Nathan went on to become a star running back for Alabama and the Miami Dolphins. Here we see his rise to high school super-stardom. The filmmakers edit in old footage of his spectacular runs with their staged versions, which I found a particular treat.

If there’s a weakness in the film, it’s the lack of depth to this central character.

He has an outspoken church going mother, played ably and with good humor by Sherri Shepherd, as well as a father (Ron Flagge) who is at once unsentimental and nurturing. So, there may not have been much drama about the real life Tony Nathan making a spiritual commitment. Still, in terms of filmmaking, I would have liked to see more of his faith’s emergence. His anxiety over his upcoming performances on the gridiron comes across with a lot more power than his beliefs.

On the other hand, Tony proves a savior to his stunningly beautiful, sexy, but trouble girlfriend, Johnnie (Joy Brunson). He stands up for her right to escape the degraded life to which her abusive father would condemn her. (In real life the high school romance endured and Tony and Johnnie have been married for many years.) Still, this seems more the product of pluck and desire than anything else.

In the climactic game between Woodlawn and its arch-rival Banks High School, played before 40,000 people in Birmingham’s Legion Field, there’s a symbolic moment of victory when Tony finally breaks away for a touchdown run. (Woodlawn actually lost the game, as we find out later.)

The real highlight comes before the game’s start, however. Coach Bishop invites his team chaplain Hank to lead the biggest crowd ever to attend a high school football game in prayer. Hank starts into the Lord’s Prayer only to have his microphone cut off by the superintendent of education. When the chaplain’s voice drops out, the crowd’s collective voice swells with thunderous conviction. It’s a truly awe-inspiring moment.

What may linger with me most about Woodlawn, though, is the superintendent’s fury.

Early on he threatens Woodlawn’s principal and football coach that if they cannot find a way to make integration work, he’ll close the school down. Woodlawn’s outbreak of religious enthusiasm solves the superintendent’s problem, but not in a way he can abide.

The superintendent reminds us of how truly alien Christianity can seem. The faith calls us to abandon our quest for power—the essence of racism—and embrace those who threaten us. On the surface that seems crazy, even preposterous.

Loving one’s enemy either makes for outrageous impracticality, or, as the film claims, miracles. No wonder it rubs some people the wrong way while inspiring others to live a life they could never have imagined.