Morgan Wallen Makes Fun Of Himself On ‘SNL’

Home Country Morgan Wallen Makes Fun Of Himself On ‘SNL’ 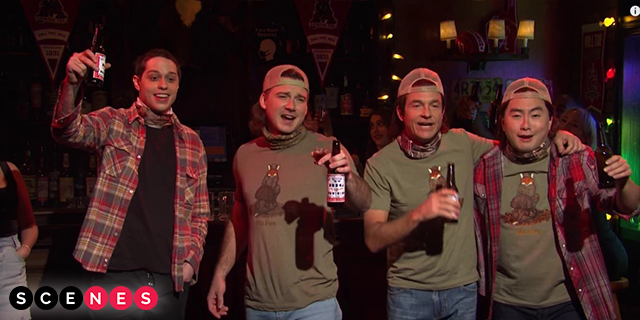 Morgan Wallen Makes Fun Of Himself On ‘SNL’

Country star Morgan Wallen poked fun at himself during a skit he participated in on Saturday Night Live. The singer, who was recently named the CMA’s Artist of the Year, was infamously slated to appear as musical guest on the sketch show two months ago but was caught breaking the show’s COVID-19 protocols after being photographed at a bar with no mask.

Wallen was replaced at the time by Jack White, but was given another shot at performing on the show this past weekend during host Jason Bateman’s show. Not only did he perform during the show, Wallen also appeared in a sketch and addressed the elephant in the room.

In the sketch, Wallen is seen in a bar and visited by versions of himself from one and two months in the future—played by Bateman and cast member Bowen Yang—who warn him to be careful about being out in public.

“Trust me somebody’s gonna post a video of you ignoring COVID protocols and the whole internet’s gonna freak out,” Bateman’s Wallen says. Wallen replies by saying he asked a girl he was caught kissing in the bar (played by the show’s Chloe Fineman) not to post any photos or video. Of course, the girl—and Fineman’s character version—posted the pics anyway.

“I thought it was an airtight approach as well, but once people hear about the party, you’re in big trouble man, you’re gonna get kicked off Saturday Night Live,” Bateman responds.

The sketch seemed to be successful, and smoothed over any potential awkwardness that some speculated could have been present at the show due to his prior behavior. Wallen ultimately performed two songs from his forthcoming double album.