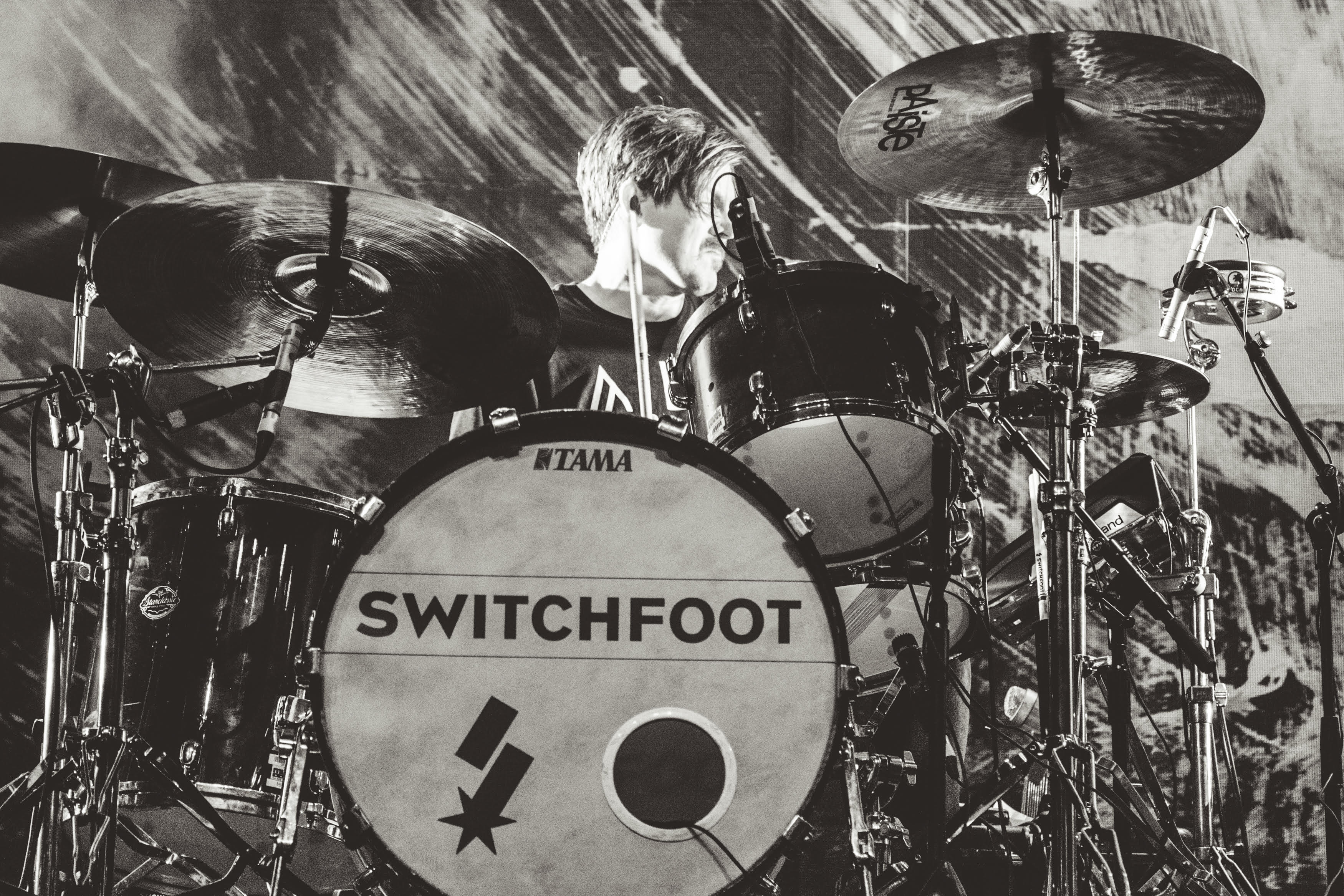 In the late 1990s, San Diego-based alternative rock band Switchfoot skyrocketed to success, as fans all over the world succumbed to their solidly melodic sound and deeply thoughtful lyrics. That combination, propelled by hard work and luck, turned a band of five surfer buddies into a household name.

Since then, Switchfoot has released 10 albums, sold millions of records, and has been honored with a Grammy. Currently they have over a million monthly listeners on Spotify.

Now, in an exclusive Q and A, Switchfoot drummer Chad Butler, a happily married, 44-year-old father of three, shares with SCENES readers how he’s navigated the perilous world of musical superstardom. He also reveals how members of the band have managed to remain focused on what they consider truly important — their music, their fans, and, most especially, their families and friends.

Q: Playing great music for a gigantic crowd must be one of the greatest emotional highs one could possibly have. So, after driving 20,000 people screaming crazy, how does one cope with being an ordinary human being?
A: Performing in front of large crowds is always a rush. Honestly, I still get nervous before walking on stage. The thing that keeps me sane during a tour is having my best friends — my bandmates — on stage with me. During a show, we thrive off of interaction with each other. It’s the brotherhood that reminds me we are still the same kids from San Diego who happen to have landed the best job in the world! When I get offstage the first thing I do is call my wife and kids and check in on my family back home. Being a husband and father is job No. 1 and anything else comes second. The transition from my role onstage to my role offstage can be challenging. I couldn’t do it without the support of the guys in my band. Having someone who really knows you and can relate to the struggle to balance work and home life is invaluable.

Q: What’s the spiritual journey that one takes to go from sane to fame and back again?
A: Funny story. My wife and I were shopping at the local mall last week and someone recognized me and wanted to take a picture with me. Afterward my wife just laughed that someone would want to do that. She keeps me humble. G.K. Chesterton said that “Gratitude is happiness doubled by wonder.” The idea that I don’t deserve any of the success in my life is something I cling to. It amazes me and keeps me grateful. I get to play music in front of huge crowds of people while I know much more talented musicians than me that have never been given that opportunity. I don’t take it for granted that I get to do this.

Q: Why did you first want to be a musician?
A: My dad was a singer in a touring rock band in the 1970s, and my mom and I traveled with him across the U.S. in an old Dodge van. Watching him perform each night as he played concerts all across the country must have lit a musical spark in me at an early age. My mom tells me that from the time I could walk I was singing and banging on pots and pans. I learned early on that music was powerful, and that songs had the ability to speak the language of the human heart. At some point, I realized that music was simply in my blood.

Q: How did you evolve from loving music to wanting to be a successful recording artist?
A: The unlikely story of becoming a professional musician was not something I ever expected. I spent most of my teenage years in my garage playing drums along with songs on my parents’ old vinyl records. Stevie Wonder, Jimi Hendrix, The Beatles, and The Police were in high rotation. I started inviting friends from school to jam and I loved the camaraderie of playing in bands. I actually never dreamed I would play music professionally. My dad had struggled to make a living playing music, so I thought I’d be responsible and go to college and get a real job. While in college, my friends and I recorded some songs for fun, and that demo tape quickly ended up getting us a record deal. After many years of touring I remember being so thankful when I was eventually able to pay rent from playing music, but it has never been about the numbers. The motivation for me has been the opportunity to communicate hope through the music.

Q: What was life like for you in the early days of your career as the band struggled to “make it”?
A: When I got married my wife had a stable job while I was just a struggling musician. I still can’t believe she married me! She was incredibly supportive of me pursuing music. She was the sole bread winner during our first couple years of marriage, and that was hard on my pride. I struggled to explain my career choice to family, and neighbors while I wasn’t really making a living. I remember meeting my wife’s boss at a Christmas party and answering the question “So what do you do?” It turns out “drummer in a rock band that no one has heard of” isn’t that impressive.

Q: When did you first realize that you actually could be famous and successful at this?
A: We recorded four albums and toured in a minivan for about six years before we ever made any money. Up to that point we had always been a supporting act opening for other bands. Those were hard years, paying our dues and developing our sound. When we finally stepped out and did a headline tour it was nerve wracking. Would anyone come to our shows? We started small but soon the rooms filled up. We started selling out bigger and bigger venues and after all those years we finally began to pay ourselves a salary from playing music… MUSIC! I still can’t believe I can call it a job.

Q: What was that moment like when you realized that? How did it make you feel and what did it specifically make you think about?
A: Being in my late 20s and finally getting to be a professional musician was amazing! I had been working as a telemarketer between tours (be nice to those guys when they call, they are just trying to get by) and I was so relieved that I was finally able to quit and focus full-time on music.

Q: What was the first really big concert you played? Where was it, and how did it make you feel?
A: We got to play at a festival in San Diego called Street Scene in 2004, and we opened for Wilco and REM. It was the biggest hometown crowd we had ever seen, and Eddie Vedder was standing side stage. I remember hearing the huge crowd sing along to our songs and feeling we’d finally made it. The ultimate compliment is to have someone spend their hard earned money to buy a ticket to sing along with you, and watching the other bands on that bill made me want to go home and practice. They were so good live!

Q: When did it first hit you that you actually were famous? How did that feel?
A: After we started doing TV performances I remember my neighbors took me more seriously, like I actually had a real job! At first it’s a compliment to be recognized in public, like “Really. You’ve heard of my band?!” But then it started to become uncomfortable, like the safety of anonymity was gone. Fame can mess with your head, and as more people would stop me on the street I began to be more self-conscious.

Q: Was the reality of fame what you thought it would be? Or was it different?
A: Fame can be fun when you are on a plane and the flight attendant gives you extra peanuts because they like your music. But it can also be inconvenient. I didn’t anticipate the drawbacks to being recognized in public. Imagine shopping for diapers at Target with your kid crying in a stroller and someone asking to stop and take a picture with you. It was a strange time of becoming more introverted. I’ve outgrown that phase over time, but that rollercoaster ride can change you.

Q: How did success change your day-to-day life?
A: In the early years of being married we had to be really frugal living on a tight budget. Once things started taking off for the band I was still really cautious to spend any money. I remember shopping at Home Depot for a washing machine with my wife and debating whether we could afford to buy it. At that very moment our song “Dare You to Move” started playing on the speakers in the store, and I took that as a good sign. Ha! We bought the washing machine.

Q: How do you deal with fame now? What’s your take on the value and drawbacks of fame and of the music business?
A: We never wanted to be famous. We don’t take ourselves seriously, but we take the music seriously. We are so fortunate to have people listening to our songs all over the world. We value that ongoing dialogue with our audience. We value the people that take the time to listen and sing along with us at our shows. We have an opportunity to communicate through songs and explore themes that aren’t always comfortable to discuss in everyday conversation. Songs are a way to freely talk about the human experience. A way to look for hope in this messed up world, to wrestle with love and loss, faith and doubt. That’s unique to art and music and makes all the sacrifices and hard work worth it.

Q: What is your life like nowadays compared to when you started out on this journey?
A: This year we have been home on hiatus, taking an extended break for the first time in 20 years of touring. I’ve enjoyed traveling the globe with my band, but it has been amazing to be home with my family full time. If I could tell my 20-year-old self anything, it would be to choose people over projects. Your work can be rewarding and the adventures exciting, but the relationships you make along the way are what matter. When the music fades, what will be left is family and friends. I hope I am getting better at loving the people around me and seeing the beauty of friendship.

See more about Chad Butler and his band at Switchfoot.com