Is There a Method to the Madness of Trump’s Tweets?

Home Social Media Is There a Method to the Madness of Trump’s Tweets? 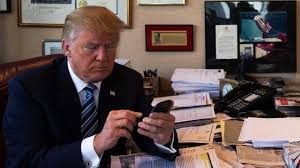 Is There a Method to the Madness of Trump’s Tweets? Trump is controversial. Trump’s Tweets are even more so—both to his supporters and his detractors. Perhaps we have been looking at them in the wrong way! Is there a method to his madness?

Berkeley cognitive scientist George Lakoff is an expert on linguistic framing. Everyone thinks first in frames. If the facts don’t fit the frame, the facts bounce off and the frame remains. So in this sense, frames rule.

Lakoff argues that Donald Trump’s Tweets are an exercise in framing and are not to be parsed as a series of factual propositions. They are tactical rather than substantive. Because the news media is addicted to ‘Breaking News’ and has a high proclivity for left-brain propositional thinking, media companies rush to report extensively on Trump’s latest Tweet… playing directly into his hand. Media outlets inadvertently shift the focus off the substance under debate and on to the frame of Trump’s choosing in his latest tweet. The media may well serve as co-conspirators of Trump’s reframing and serve as amplifiers of his preferred perspective. Trump’s approach may be subversive, but it is also genius. While there may be some substance in some of his Tweets, their main focus is to establish the frame rather than deliver the facts.

Lakoff also notes that embracing or attacking the frame has the same result of strengthening the frame. Confrontational argument or the piling on of alternative facts does not shift frames. This left-brain strategy is a non-starter. Rather frames shift when we engage the imagination, tell a better story, or use creative indirection. Poet Emily Dickinson put it this way:
“Tell all the Truth but tell it slant —
Success in Circuit lies
Too bright for our infirm Delight
The Truth’s superb surprise.”

We are to tell the whole truth, but not directly. She explains this in her second line, “Success in Circuit lies.” We are to tell the truth in a round about manner and she inverts the syntax of this line to demonstrate what she means.

How we process truth is infirmed, weak, and unreliable. It is associated with our desires, what Dickinson refers to as “delights”—we are not thinkers first, but lovers first. We come to understand that which we love. Desire precedes thinking and therefore our apprehension of the brightness of Truth is impeded by our “infirm Delight.”

Finally, finding truth is more like an ah-ha moment, a surprise, an unexpected self-discovery, than the relentless inevitable logic of a syllogism. Dickinson is talking about embodied truth seeking, how flesh and blood people actually go about it day-to-day. This is not elite epistemology, but practical everyday epistemology. This is how actual people come to their conclusions.

It seems that Trump is a step ahead of the mainstream media. Trump has been chided for his seeming disregard of facts. But as Lakoff a well-known Democratic strategist has shown, Trump is in the framing business. And as we have seen, frames rule.

Marcel Proust states: “The real voyage of discovery lies not in finding new lands, but in seeing with new eyes.” If the substantive debates are reframed, we will see them with new eyes. This is the mission of Trump’s tweets.