[EXCERPT] “The Bridge to Growth” 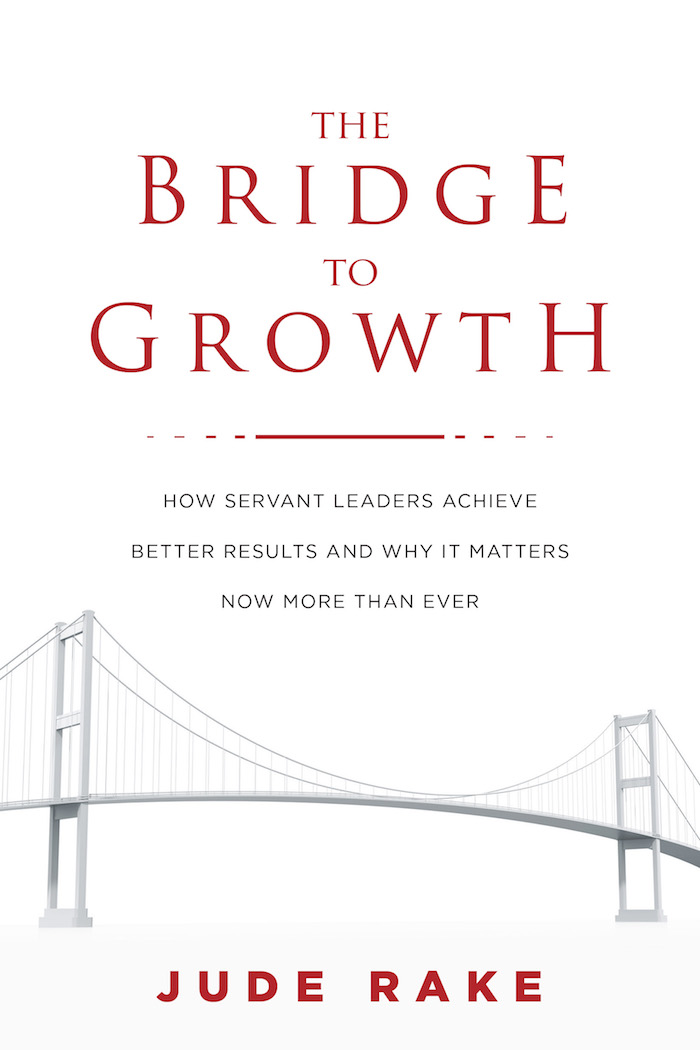 [EXCERPT] “The Bridge to Growth”

Published by Special Arrangement with Skyhorse Publishing. The Bridge to Growth by Jude Rake is available for purchase at Amazon, Barnes and Noble, or your local indie bookstore.

Most leaders ascend to ever-increasing levels of influence because they are smart and assertive, and because they deliver good results—and not necessarily because they are great at bringing out the best in other people. Yet leading people becomes increasingly important the higher one ascends. Could this be why so many would-be leaders struggle once they reach senior leader­ship positions in businesses, schools, governments, churches, and other organizations?

Unfortunately, many organizations treat leadership as though it is an innate ability. Something you’re born with. Something that just happens naturally. While organizations readily invest in teach­ing their employees routine or requisite skills, they provide little development when it comes to leading people. This is one reason why so many organizations are under-led and over-managed, and why so many people feel disengaged from their organization’s mis­sion and goals.

Almost every leader fights the creeping feeling that his or her team could be achieving more. These leaders constantly wonder if they are doing everything possible to enable the success of the people they lead. I believe the best leaders feel these yearnings the most. While they are beholden to the stakeholders who hired them, these leaders are also driven by the sense of responsibility they feel toward their workforce.

My most significant personal confrontation with this dilemma happened early in my career when I was promoted to Business Vice President at SC Johnson, replacing Fisk Johnson as he moved upstairs to eventually take the company leadership reigns from his father, Sam Johnson, upon his retirement. It was a big step in my career. I transitioned from an emerging leader role—heading a small, albeit very successful team—into a corporate officer role leading one of the company’s largest divisions. Our CEO at the time was fond of working with The Boston Consulting Group (BCG), with whom I would now be paired. They were tasked with analyzing our current situation and recommending a strategy for accelerating profitable growth of the division I now led. As I built and launched my leadership team, and BCG performed their analytics in parallel, I became increasingly concerned about the separation between the two. While the BCG consultants were clearly very bright, they lacked experience and were not digging into the business as much as I had expected them to. I sensed that the project was streaming toward strategic recommendations that might be too superficial in nature, and not adequately grounded in facts and research. Worse, my leadership team increasingly did not want to be bothered by the consulting project at all! They viewed the consultants as a distraction from the day-to-day reality and demands of their roles and responsibilities. They had real and pressing work to do. I began to worry that BCG would develop a plan for which none of my team felt ownership. I knew such a plan would be doomed to fail.

Instead of offloading this important work, I sat down with our BCG teammates and with my leadership team, and led them in the development of a more collaborative strategic planning process (that is defined in more detail in Chapter 3, so I will not belabor it here). Because we invested the time and energy to engage our workforce more intentionally in the planning process, we achieved increased workforce collaboration and commitment to the plan we ultimately developed and executed. It led to unprecedented profitable growth of SCJ’s home cleaning division over the next four years and a strategic planning process that I would go on to use for many years to force-multiply my leadership influence, elevate workforce engagement, and significantly improve the financial performance of several businesses.

I noted earlier that the cadence between strategy and execution is compressing, making the integration of the two more important than ever. But too many workers are being left out of this equa­tion. We hear it all the time—leaders must motivate and fully engage the people they lead. But how? Increasingly, they can’t just assume that everyone will follow them just because they are the boss. That sounds fairly obvious, but mounting evidence suggests a gap between this leadership style and reality. A recent workforce survey by Franklin Covey revealed:

Equally startling, a global survey of over 90,000 workers by Tow­ers Watson uncovered:

In The Three Signs of a Miserable Job, Patrick Lincioni suggests that people disengage for the following reasons:

This is an indictment of traditional leadership, and it is why I believe that many companies are over-managed and under-led. What if 100 percent of the people in a company said they were “all in?” What impact would going from 21 percent engagement to 100 percent engagement have on results? According to a recent Gallup survey, engaged employees are 21 percent more productive, have 37 percent less absenteeism, and have 25 percent lower turn­over. A study by Vance found that companies with highly engaged employees score between 12 and 34 percent higher in customer satisfaction ratings. And my favorite study by Aon Hewitt found that companies in the top quartile of employee engagement scores generated 50 percent higher total shareholder return than the average company. You do the math. Of all the levers a leader has at her fingertips to improve results, this is the biggest and most often under-leveraged.

Back in the early 1990’s, I read Max DePree’s book titled Lead­ership is an Art. I found his insights regarding servant leadership inspiring because he articulated the leader’s responsibilities to the people he leads in more personal, human, and engaging language than I had read or heard before. And to give credit where credit is due, Robert K. Greanleaf first introduced the servant leader con­cept in 1970 when he published his essay entitled “The Servant as Leader.” That essay was later expanded into a book, and the servant leadership movement was born.

I was first exposed to the servant leader concept at a time when my career was blossoming and I was rising up the corporate lad­der, yet I was not feeling inspired by most of the leaders I stud­ied above my immediate supervisor. In fact, I was having serious doubts about the desirability of ascending into the senior manage­ment ranks. Other than their paychecks, there wasn’t much about the existing models that I found appealing, and I had serious res­ervations about how well I would fit into the executive suite. I had grown up in rural, blue collar Indiana and I found most of the senior leaders I was encountering woefully out of touch with the people on the front lines of the business. I was convinced that future leaders needed to be more empathic and in touch with the people they aspired to lead, and Max DePree gave me hope that this was possible.

The best servant leaders are not “soft” as some might think. They have a very high performance bar. But they balance high expectations with caring leadership that inspires the people they lead to raise the bar even higher and achieve extraordinary results.

Since then I’ve had the good fortune to meet with—and in some cases work with—experts on this topic such as Steven Covey, Jack Welch, Jim Collins, Tom Peters, and Patrick Lincioni. I don’t need to tell you that their lessons on leadership are legendary. They teach us that the best leaders are typically not the ones we read and hear about in the media. In Good to Great, Jim Collins refers to these as Level 5 leaders. In Max DePree’s assessment, these leaders typically take more than their fair share of the blame for stumbles and give credit to those they lead for successes. They also realize that they need all hands on deck to achieve the full potential of their company. Servant leaders are force-multipliers, not just force direc­tors. They bring out the best in the people they lead, and they don’t settle for a mere 21 percent of their workforce being willing to step up and go the extra mile. They serve rather than merely command the people in their company by giving employees what they need to fully engage and commit to achieving the company’s goals.

Servant leaders focus relentlessly on moving more of their workforce beyond being satisfactorily disengaged toward eagerly committed to making a difference.

Many people go through life never experiencing a com­pelling leader like this, which is why I feel privileged to have worked with several of them. I also had the good fortune of learning from a few exceptional sports coaches earlier in my life who helped me understand what it takes to win. My football coaches, Bill Mumford and Joe Cequeira, taught me that hustle often trumps talent when talent doesn’t give it everything it has. Because of their examples and leadership, I learned early to rel­ish the role of the underdog. Later in life, as a basketball coach myself, I was fortunate to experience the leadership influence of Pat Summitt. Pat was a model for balancing the forces of com­petitive intensity, empowerment, and caring with an incredible desire to win. (More about Pat later in Chapter 1.)

None of these leaders and coaches was perfect, but each taught me something special that I was able to blend into my blueprint of leadership principles that I follow. Over the past three-plus decades, I leveraged these nine proven principles while leading high performance teams building world-class brands, profitably growing big and small businesses, and increasing the economic value of publicly-held, family owned, and private equity backed companies across a variety of industries. I also used them to elevate workforce engagement, collaboration, innovation, and accountability to bridge strategy into exceptional execution and results

It’s been many years since I first read Max DePree’s book about servant leadership. Yet I’ve come to believe that servant leadership will ultimately be the only kind of leadership still standing. Sure, it’s not for everyone, because it’s harder in the short term than sim­ply implementing autocratic or laissez-faire models. But assuming a potential leader has the requisite skills to do the job, I believe my proven leadership principles can help catapult her toward success­fully achieving the success and growth she desires.

In Chapter 1, we’ll begin the journey across the bridge by div­ing into the first principle. Together we’ll explore a challenge all leaders face, learn what matters most, and review a success model. And throughout the book you’ll get a chance to meet some of the leaders, coaches, and mentors that informed and helped me develop the nine principles. Onward!