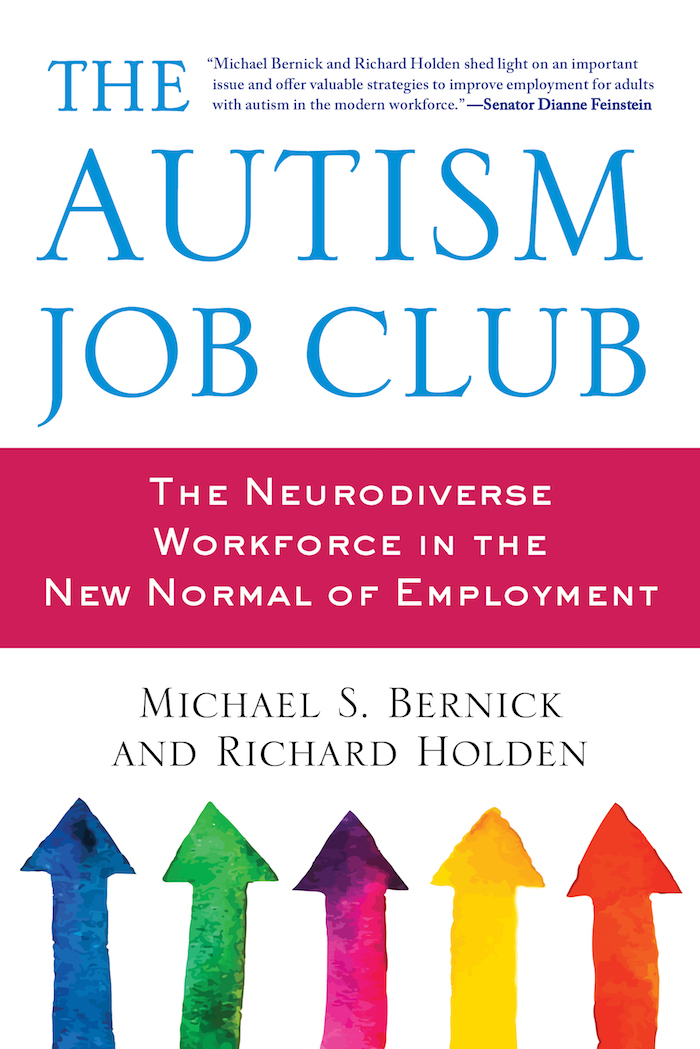 This article is adapted from the new book, The Autism Job Club, by Michael S. Bernick and Richard Holden. Published by Special Arrangement with Skyhorse Publishing. The Autism Job Club is available for purchase at Amazon, Barnes and Noble, or your local indie bookstore. All rights reserved.

We Come Together as the Autism Job Club: Introducing Six Autism Employment Strategies

On the first Saturday of each month, the Bay Area Autism Job Club gathers at the ARC building, located at 11th and Howard in San Francisco’s South of Market area. Fifteen or so adults with autism are in attendance, ranging in age from early twenties to fifties, and even one member, James Ullrey, age seventy-two.

It is not easy to see the Autism Job Club as the vanguard of change for workers with autism. At the meetings, club members will laugh inappropriately or talk to themselves, go off topic, stare into space, wander around. Though many of the members have at least some college education— and a significant number have college degrees—they all are on the employment margins. Some are unemployed; most have part-time or contingent lower wage employment. The club meetings focus on relatively basic job search skills, résumé skills, and interviewing skills. Yet, the Autism Job Club, and hundreds of other local groups across the United States, are experimenting with new employment projects and structures for workers with autism and other neurodiverse conditions—cerebral palsy, dyslexia, learning disabilities. It is an effort pushed forward by the unsustainable rise in costs of government disability programs, changing social views, and most of all, the fierce energy and extra-governmental efforts of families and friends of workers with neurodiverse conditions.

“If you’ve met one person with autism, you’ve met one person with autism,” Temple Grandin responds when asked about the characteristics of persons with autism. Ms. Grandin, a professor of animal science and inventor who was diagnosed with autism as a child, has been a presence in the autism community nationwide since the early 1980s, with separate memoirs published in 1986 (Emergence: Labeled Autistic) and 1996 (Thinking in Pictures). She became known to a wider population in 2010 through the movie, Temple Grandin, in which she was portrayed by actress Claire Danes.

Adults with autism span a wide range of skills, abilities, education levels, and interests. Much of the conventional wisdom regarding work skills and deficiencies of persons on the spectrum is wrong. Adults on the spectrum, for example, do not all excel in areas of math or science (most don’t) or are “little geniuses.” At the same time, adults on the spectrum are not all plagued by social isolation or difficulties/a lack of interest in workplace relations (many are very social).

So it is with the diversity of skills and abilities in our autism job club, as is clear from our first meetings. In early November 2011, the Autism Asperger Syndrome Coalition for Education Networking and Development (AASCEND), the volunteer group of adults with autism and their friends and families, posted a note to its members regarding the formation of a job club. At the first meeting, on Saturday, November 19, forty of us gathered in a small classroom at the City College campus in downtown San Francisco. As we went around the room, the participants described their job status and job searches, Our autism technology employment network with Bay Area technology firms has not gained traction over the past three years, and he’s determined to move it forward.

Camilla and Greg connected with the SAP hiring initiative in Palo Alto and are volunteering as advisors. One of our club members, Janice, is among the first seven trainees.

Keith Halperin, an executive recruiter who identifies on the autistic spectrum, has stepped forward to volunteer as a one-toone job coach. Laura Shumaker continues to research and profile autism employment initiatives on her San Francisco Chronicle autism blog. On the state level, Dr. Lou Vismara is coordinating upcoming hearings by the California State Senate on employment for adults with autism.

As word of the club has spread in the past two years, I have received emails from adults with autism and an even greater number from family members, asking for employment assistance. I try to respond to each request within the same day—as a parent, I am well aware of the deep worry that lies behind each message.

If a job seeker is in San Francisco or the inner Bay Area, I will try to suggest potential employers or offer to brainstorm approaches. I will ask them to email me regularly about companies they have contacted and try to make suggestions or follow up if I know anyone at the company. Usually, if a job seeker just knows that someone else is interested or tracking her or his job search, that can be a significant motivator in itself—to overcome the discouragement that defines job search today.

For others in the autism community outside of the Bay Area, my advice is often more general, along the following lines. The starting point for your job search as an adult with autism or a family member, should be the same as for all job seekers: identifying and emphasizing strengths and interests. Don’t think of particular occupations for persons with autism. To be sure, some segment of our autism community will be skilled in technology jobs, but a very limited segment.

Perhaps most of all recognize how more difficult it is today for all job seekers than it was in previous decades. Ignore the official government job numbers that show the national economy continuing to improve. It has recovered the depths of the Great Recession in 2008–2010, when the economy was shrinking and net job losses were in the millions. But the overall numbers mask the breakdown of some full-time jobs into part-time, contingent, and project-based employment.

Following this, you need submit many more applications than was true in the past. You need to go way beyond the job boards, with supplemental information and in-house recommendations, if possible. Further, you need to try to “get in the door” in any way, through taking a lower level job, if necessary, or by volunteering.

Within the autism community there is disagreement about whether to “disclose” autism during the hiring process. I side with autism job coach, Jan Johnston Tyler and others, that it is almost always best to do so. Given how widely is autism’s reach in our society, most employers will have some connection. They are more than likely to provide the needed patience and flexibility if they know from the start.

In this book we have set out an agenda for our collective efforts, based on recent autism employment experiences. Let us now return to the six main elements of this collective agenda and briefly review.

Published by Special Arrangement with Skyhorse Publishing. The Autism Job Club is available for purchase at Amazon, Barnes and Noble, or your local indie bookstore. All rights reserved.