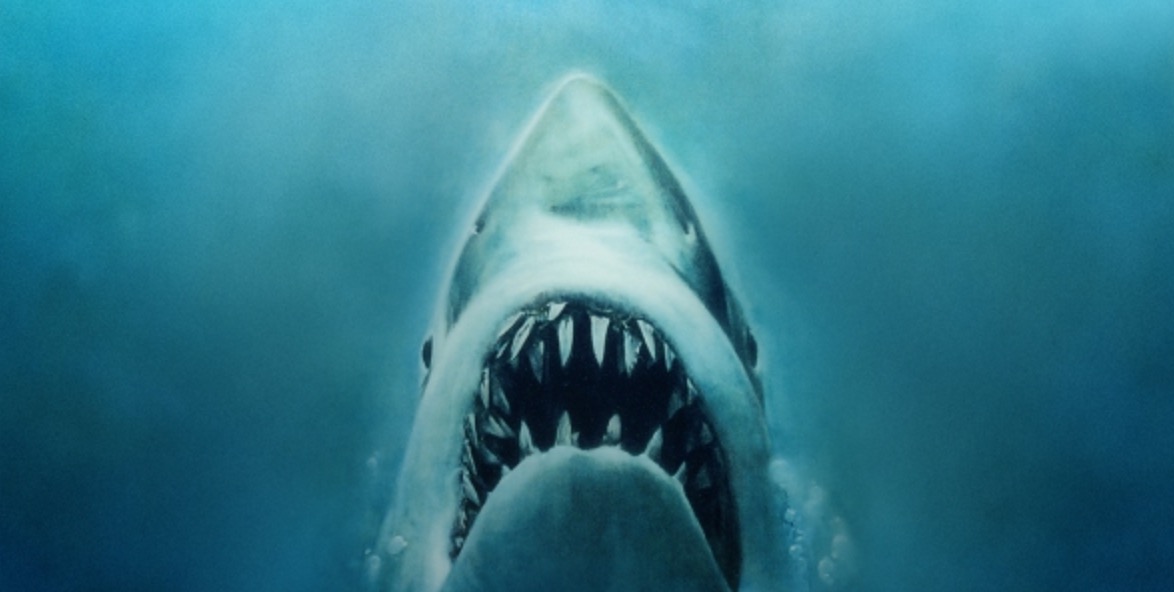 How many of you can go for a nice peaceful swim in the ocean all alone without at least pausing for a moment. Flat on your back, toes in the air, do you feel that slight momentary panic and look around, wondering what’s under the water with you? You may even roll your eyes, laugh at yourself and go back to enjoying your swim — momentarily. But then you hear that music in your head. Da dum, da dum, da dum. Suddenly your beating a hasty retreat to the safety of the beach. Thank Stephen Spielberg and let’s wish him a happy birthday. It was on this day in 1975 that Spielberg was born to a mother (and I mean a real muther) we all know as Jaws. 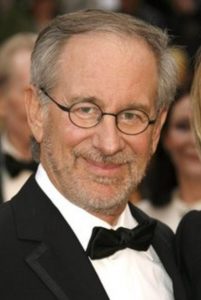 Jaws was truly lightning in a bottle. Nothing had ever been accomplished or seen like this film. The story of that muther, that great white shark, terrorizing a New England resort town became an instant blockbuster. It was the highest grossing movie in history until Star Wars bested it in 1977. And the film spawned a long line of sequels, but none that could equal the original.

Jaws, of course, starred Roy Scheider as noble Chief of Police Martin Brody, Richard Dreyfus as the rich, sassy marine biologist and British actor Robert Shaw as the gruff and lovably belligerent fisherman Quint. Shaw had been a Shakespearean-trained actor, and perhaps it was this training that made his speech about the U.S.S. Indianapolis so powerful. He personally worked on that speech, re-writing it until it was perfect.

I was 10 years old and literally sat in my father’s lap during practically the entire film. Go into the ocean? I didn’t for years. And yes, when I manage a nice swim now, it’s often  interrupted by that music. That now iconic music was perfect. In fact, the film took home three Academy Awards including Best Score, Best Sound and Best Film Editing. It was nominated for Best Picture but was beat out by One Flew Over the Cuckoo’s Nest directed by Miloš Forman which starred Jack Nicholson and featured a supporting cast of Louise Fletcher, William Redfield, Will Sampson, and Brad Dourif.

Jaws was based on a book of the same title written by Peter Benchley who went on to write The Deep, which hit the big screen in 1977. However, the story of Jaws was actually based on true events that took place along the New Jersey shore the summer before the United States entered World War I. It was in July 1916 that a lone white shark, pulled by the Gulf Stream current, found its way to the southern coast of New Jersey and the shores of the Engleside Hotel, the grandest lodge north of Atlantic City. The story is brilliantly told in a book published in 2001 called “Close to Shore” by Michael Capuzzo. 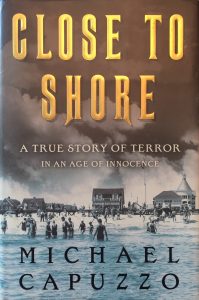 “The smell of the sea pulled him east. The Atlantic spread before him like a pool of diamond, liquefied, tossing gently in the gleaming tips and shards of changeable, fading bronze light….The young man couldn’t wait to get in the water.”

It’s masterful story-telling and I highly recommend this work of nonfiction. Benchley must have known the story. A number of elements in his fictional “Jaws” seem to represent actual events from the attack of the first lone swimmer to the attack of a young boy who was swimming with other children. Even the mass shark hunt by local fishermen took place in 1916. People were scared to death. No one even knew what a shark was back in those days.

Of course, it took the 1975 summer blockbuster Jaws to remind us of the real food chain in the ocean, which in turn, scared everybody out of the water — again.

Jaws had a budget of $12 million and was produced by Richard Zanuck and David Brown (both of whom have died, Brown in 2010 and Zanuck in 2012) whose later credits included The Verdict (1982), Cocoon (1985) and Driving Miss Daisy (1989). Though the story was about the fictional town of Amity Island, filming took place on Martha’s Vineyard, Massachusetts. The production was hounded by delays, mostly due to the malfunctioning fish mechanics. As it turned out, though, those delays may have saved the film. Recall how far along in the movie that the [mechanical] shark is even seen. For me, it made the movie even more terrifying, not quite knowing where the fish was and when it would strike. And we can’t forget the first time we did meet that muther of a fish. Remember Chief Brody is laying a chum line when this massive shark suddenly presents itself. Brody backs away in fear saying, “You’re gonna need a bigger boat.”

And that’s exactly what Spielberg would need for his future career, blockbusters, awards and, let’s face it, money. Jaws launched a most prestigious career for Spielberg who was mostly self-taught at the time he made Jaws. Since then he has become one of the most influential people in not just Hollywood, but the entire film industry with such epics as Close Encounters of the Third Kind (1977), Raiders of the Lost Ark (1981), ET: the Extra-Terrestrial (1982), Jurassic Park (1993), Schindler’s List (1993) and Saving Private Ryan (1998). Jaws along with E.T. and Jurassic Park rank among the 10 highest-grossing movies of all time.

So happy birthday Stephen Spielberg, or rather happy birthday to your life-changing (for all of us) Jaws. That was a real muther of a movie! We really appreciate your genius but wish you could have done it without scaring us all out of the water!