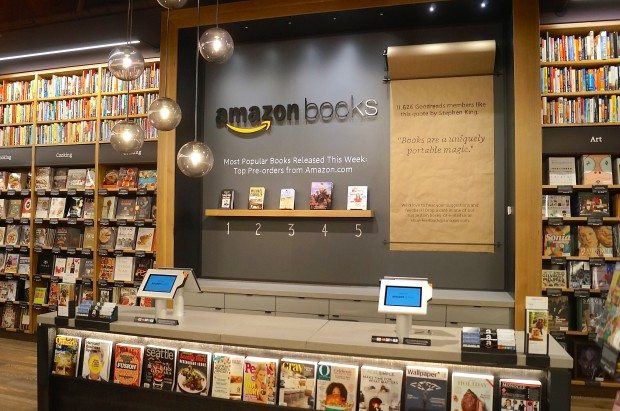 I love bookstores. How could anyone not love bookstores? There’s literally something for everyone. They’re quiet and peaceful. They’re the perfect respite from our busy world. So of course I had to go check out an Amazon bookstore — called, aptly, Amazon Books, when I found out one had just opened up near where I was staying in New York City this week.

It was weird. Not in a bad way. Possibly even in a good way. But weird in a way in that it was just so familiar. I mean, it’s a bookstore.

But that in and of itself is weird because Amazon, of course, is the company that famously slaughtered the bookstore. Okay, that’s a bit unfair to both sides. Independent bookstores appear to be thriving once again. What Amazon did maim was the big-box bookstores — you know, the ones that almost killed the independent guys. In particular, Amazon destroyed Borders, while Barnes & Noble appears to be hanging on by a thread – a thread that includes the Borders trademark now.

So what’s most strange about Amazon’s bookstore is what it most reminds me of — one of its victims: Borders.

You would not walk into an Amazon Books and mistake it for a mom & pop, independent shop. Nor would you mistake it for a throwback library. It looks like what Borders used to look like before Amazon killed Borders. It looks like salt in an old wound. Or a monument built on top of a gravesite – Amazon Books is opening in the same New York City shopping center where a flagship Borders once stood.

So yeah, it’s a bit uncanny walking into one of these stores — at least the one I visited in New York City. More specifically, Amazon Books feels like Borders if Borders had been created in 2017 (fine, technically they started testing in 2015).

First and foremost there are, of course, books. But rather than rows upon rows of spines, they all face forward, like a store of end-caps. And rather than prices, there are barcodes. Because Amazon gives you the online price if you’re a Prime member, but the jacket price if you’re not.

Then there are the gadget tables, which are intermixed in every area (as are Kindles throughout the store). There are a few areas devoted to Amazon devices, but there’s also a lot of space devoted to other tangential technology created by other companies. Like Bose headphones and speakers. It really sort of does look like the manifestation of Amazon.com: Amazon products front and center — including things like batteries — but pretty much everything else, just in case.

Well, not everything. You won’t find Apple products. Nor Google ones. Nor Microsoft ones. At least I couldn’t. Not sure if this is policy or if it’s just, you know, you could go to an Apple Store, or a Google Store, or a Microsoft Store if you wanted those things.

Or you could go to Amazon.com, of course.

Another notable element of Amazon Books is the “If You Like…” sections. This strikes me as a particularly smart thing to do in a physical store. It’s the type of thing you might ask a bookstore employee about, but rather than a singular opinion, this is backed by Amazon data. And at quick glance, the recs are good. The same basic porting of Amazon’s site-to-store exists in the “Page Turners” and “Highly Rated” sections of the store. Data. Data. Data.

There are also barcode scanners all over the store. This is in case you find a book you like and want to see the Amazon price. Apparently you can do this with your smartphone as well, but opening the Amazon iOS app, I couldn’t figure it out. And I’m the type of person who should be able to figure such things out. (There is an area in the app to scan products themselves, or even packages, but I couldn’t find the barcode camera. I assume I just missed it.) So instead, I walked over to the physical scanners each time I wanted a price check.

Anyway, Amazon Books was a weird experience partially because it wasn’t all that weird — it looked like a bookstore, it was a bookstore. But it was also a little weird in the way that seeing Grand Moff Tarkin in Rogue One is weird — Amazon Books is like an artificial resurrection of Borders.

Will people like these stores? I think so, because they’re bookstores. People like bookstores. Unfortunately for Borders, they just didn’t like them enough to buy books at a higher cost from a chain — for that, people can and do go to independent bookstores. And if they want the best price and selection, they go to Amazon. And now they can also go to Amazon in person.

And they can buy other stuff there. Like gadgets — as long as they’re not made by Apple or Google or Microsoft. Though maybe one day those too.

I found myself wondering this while walking through the store: might this simply be step one for Amazon in retail? What if the goal, just as with the site, is to create “The Everything Store” — the actual store version? Might books once again just be the first step? Certainly, what Amazon is doing in grocery suggests this. But will Amazon bookstores one day morph into more generalized Amazon stores?

I will say there was a line out the door today. But it was day one. And Amazon Books is a curiosity. The store was also a little hard to navigate because it was filled with folks from the press as well.⁵ People are interested in these stores, but is it all novelty? Is it compelling in the same way that Henry Ford opening a stud farm as his cars rolled off an assembly line would be compelling? It’s a fun story. The ultimate middle finger. But is it more?

My gut reaction is: I think so, but I’m not entirely sure why. Maybe it really is just as simple as the fact that people like bookstores. And Amazon made a fairly nice bookstore. And it’s one that they can undoubtedly make work financially. Because they’re Amazon, and they’re run by a financial wizard.

Would love a cafe in there though. Just saying.

This column was originally published by the Foundation for Economic Education, and is reprinted with permission.