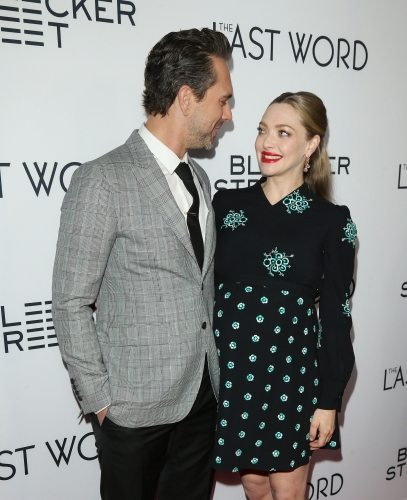 Thomas Sadoski and Amanda Seyfried secretly got married! The big announcement came recently when Sadoski was a guest on The Late Late Show. As Host James Cordon was congratulating the actor on his engagement to Seyfried, Sadoski flashed his wedding band, surprising host and audience alike.

“We eloped, we just took off into the country with an officiant, just the two of us and we did our thing,” the 40-year-old actor said. “It was beautiful. It was everything that it should be. It was just the two of us talking to each other.”

Cordon and fellow guest actress Vanessa Hudgens just couldn’t handle the cuteness. Cordon then asked Sadoski what happens after a wedding with just three people? Sadoski said, “Well, then you take the dog and you walk through the country and you go home. And you like have your life. We went out to dinner. We had a great day. It was perfect.”

Yes, Amanda and Thomas tied the knot, but that’s not all of the exciting news for these happy newlyweds. They are also expecting their first baby and the soon-to-be dad says he’s “not ready” for this. His explanation makes sense though.

“I’m more excited about this than I’ve ever been about anything in my life,” said Sadoski. “I’m also more terrified about it than anything I’ve ever been in my entire life.”

Seyfried, 30, and Sadoski first met while working together on the off-Broadway show The Way We Get By in 2015. Their romance began in March of last year when they reunited on the set of their film The Last Word, also starring Shirley MacLaine. The couple got engaged in September and announced their pregnancy in November! Wow! That’s an exciting couple of years for this lovely Hollywood couple.

Congratulations and best of luck to your first year of juggling two successful acting careers, a new marriage and a baby!