Wedding Bells for Dancing With The Stars Icons 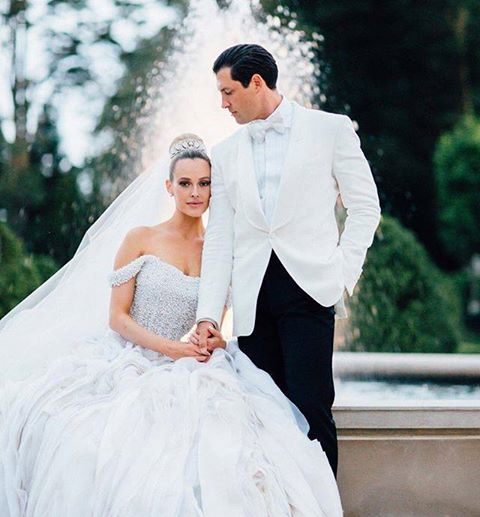 Wedding Bells for Dancing With The Stars Icons

Murgatroyd dazzled the crown in a Karen Sabag Couture ball gown she bought during a trip to the Ukraine. Chmervoski wore a Tom Ford suit, and, stated that [the wedding] “was everything we ever dreamt of.”

The couple had been dating on and off since 2012 and finally became engaged in December 2015. Both Peta and Maksim became dance icons on Dancing With The Stars for their talented moves, which gave them both a trophy with other partners respectively.

Peta posted on social media about her special day.

✨day of my life. I married my soul mate, my perfect man, the only man I could see myself growing old with. I will love you until the end @maksimc

She posted again, this time about her magically-stunning wedding dress. 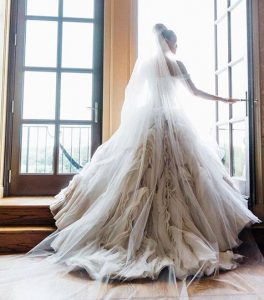 To say that I was happy with my wedding dress would be a complete lie….instead, I found myself gasping as I tried it on for the first time in @karensabagofficial couture bridal salon. She and I designed my dream dress, a one of a kind masterpiece that I will cherish forever and hopefully pass down to my daughter one day. I can’t thank Karen’s team enough for the hundreds of hours it took to put it together with all the embellishments. I will always love you and remember you taking care of me and ensuring my dress was

Newlywed husband Maksim, took to Facebook to express gratefulness for the fairytale wedding.

Thank you isn’t enough for this… I am eternally grateful to this magical place. It’s rooms, staff, kitchen and grounds are bar none. Every single person went above and beyond to make this the most incredible experience for our guests and for Peta and me. Thank you for making @oheka_castle ours for the weekend, exceeding our expectations and sending us off into the married life in the best way possible. We will never forget this…

“When I introduced Brooks to the lake, he fell in love with this special spot, and we knew this was where we wanted to raise our family and grow old together. It just felt right to be married here,” Hough tells People Magazine. 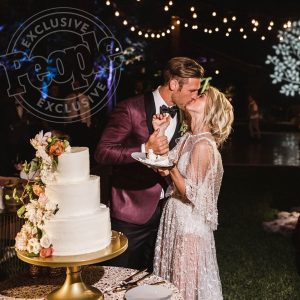 WE SAID I DO! I am officially the wife of the most incredible man, and I cannot wait for our future together. You can read more about our special day on the blog, and don’t forget to check the latest issue of People for all more pictures and details of our amazing weekend. We’ll be starting our new life (and taking a much-needed break) on our honeymoon, so I’ve handed over the keys to my site to some very trustworthy sources. See you when we return! Read more here.

The past few days have been some of the best I’ve ever had. To be surrounded by that much love was a feeling that will stay with me forever. After all the fittings and tastings and planning, I thought I had an idea of what our wedding would be like but I can certainly say our big day completely surpassed my wildest dreams. It was just beautiful.