“Okay, That’s Enough”: The FaceBook Campaign to Boycott the Oscars 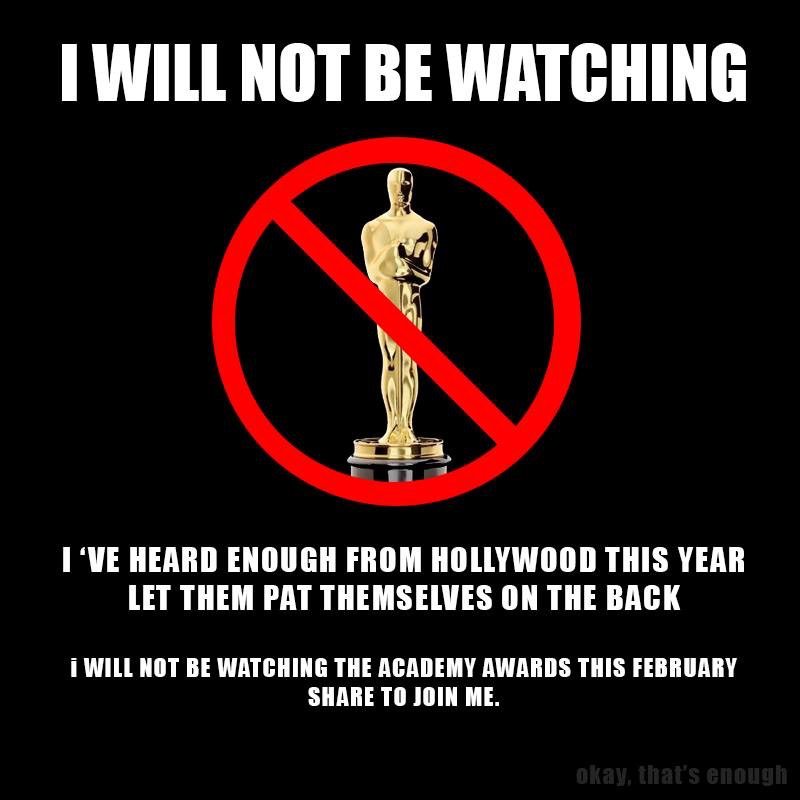 “Okay, That’s Enough”: The FaceBook Campaign to Boycott the Oscars

There is a campaign on FaceBook to boycott the Oscars this year called “Okay, That’s Enough.” What’s enough? Well, for starters, according to followers of the campaign, all the anti-Trump rhetoric coming out of Hollywood.

For instance, Meryl Streep received a lifetime achievement award at the Golden Globes in January. She was very eloquent in her acceptance speech until she criticized President-elect Donald Trump citing an incident from 2015.

As if on cue, the multi-award-winning actress teared up and became emotional. The stars in attendance were mixed on their acceptance. Well, most everyone seemed to nod and agree while a couple of people (Mel Gibson and Vince Vaughn, see an earlier SCENES article) both listened with a surprised scowl upon their faces.

I won’t fault Streep’s views or opinions since she is certainly entitled to them. But her criticism of our then President-elect begs the question that many people have been asking.

Should movie stars, actors and other Hollywood public figures use their celebrity to preach their own brand of politics, especially in a forum such as an acceptance speech during an awards show broadcasting throughout the world?

One gentleman said absolutely not, declaring it unfair for actors to use public forums, especially outside the political arena, to “get on a soapbox and try to convince us they know better than we [ordinary people] do.” He went on to say, “I don’t get free air-time to spout my opinions.”

More recently, I received a FaceBook post that stated a similar opinion though a little more forcefully. It was posted from “Okay, That’s Enough” and included a picture an an Oscar with a a line drawn through it with the headline:
I WILL NOT BE WATCHING
I’ve Heard enough from Hollywood this year
Let them pat themselves on the back
I will not be watching the Academy Awards this February
Share to Join Me

This post had 6.6K shares and almost 700 comments, both in support of and against the message. 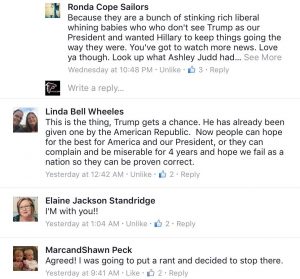 It’s an interesting debate. Actors certainly have the right to vote and campaign for whomever they choose. However, to try and sway the public because of their celebrity does seem rather underhanded. And during an awards ceremony? Seems hardly the time or place, and to many, it’s taking undue advantage.

I read an article written by Harris O’Malley in The Daily Dot titled “5 Rules for Sharing Your Unpopular Opinion.” These rules were for posting on FaceBook, but I realized that his  suggested guidelines are good rules of thumb for expressing an opinion (popular or unpopular) in general, especially in public speaking. And celebrities, like everyone, could learn a thing or two in this regard.

I’m paraphrasing or quoting directly from his article (you should truly read O’Malley’s full article), but here are some of his suggestions.

Does this argument need to happen?
The fact that you may disagree with someone doesn’t necessitate sharing that disagreement, nor does having an opinion mean that you absolutely must make your position known. You may have strong feelings about the topic, but not every thought you have needs to be shared. (Especially if you do not have an appropriate venue for sharing your opinion.)

Focus on the debate, not the debater.
Arguments are about trying to change minds and bring someone around to your point of view. Fights on the other hand  are about beating the other person up either literally or metaphorically.

To many people, Streep’s anti-Trump message was completely out of place at the Golden Globes, and, begged the question, what did she hope to accomplish other than smearing the man the public had already voted in as President?

Want respect? Participate in the community (without arguing). Communities are built upon relationships and relationships are in no small part based on previous behavior. If your first introduction is to come in like a seagull—making a lot of noise and pooping on everything—then you can’t be surprised when people have a less than charitable opinion of you.

Silence isn’t the same as winning
Winning an argument means that you’ve persuaded the other person to change their mind. Getting someone to ignore you, block you, or otherwise quit paying attention isn’t winning; it just means they no longer feel like wasting their time and energy responding to you (or watching you win an Academy Award or watching your movies in general). Arguing to silence or to frustrate someone isn’t a debate, it’s bullying. When all you’ve done is convince someone to ignore you, you haven’t proven your point through superior rhetoric or the correctness of your opinion. In fact, you’ve highlighted the weakness of your debating technique. You haven’t changed their mind or gotten them to concede victory, you’ve just annoyed them into shutting you up so that you no longer waste their time.

This last one seems to fit with what’s going on. People simply do not want to hear the opinions of actors and celebrities anymore whether on the screen or on Twitter or FaceBook. And, celebrities who come out with strong opinions and voice those opinion in inappropriate venues with emotional rather than rational rhetoric are simply being “blocked.”

In this case, supporters of “OKay, That’s Enough” are “blocking” Hollywood and outspoken movie stars by boycotting the Academy Awards, and, in many cases, boycotting movies for the same reason.

Its like my father always said, “If I want your opinion, I’ll ask for it. Until then, keep your two cents to yourself.”

I’m not suggesting you boycott the Academy Awards (or movies for that matter). I think it will be a fun show, as always. I just hope politics is kept off the stage. Folks in Hollywood need to respect everyone and if they want to debate, they should play fair and do it when someone can make a rebuttal. Hollywood (and the stars responsible for the anti-Trump campaign) are only alienating the people to whom they owe their success. And that includes followers of “Okay, That’s Enough.”

And let me say this for the record. I’m not criticizing anyone for their beliefs or opinions. I’m simply reporting on a campaign that is fed up with Hollywood’s anti-Trump rhetoric. And, truthfully, I am too. Actors are just actors. They aren’t rocket scientists or political scientists, regardless of how well they may  play these roles in a movie or on television.