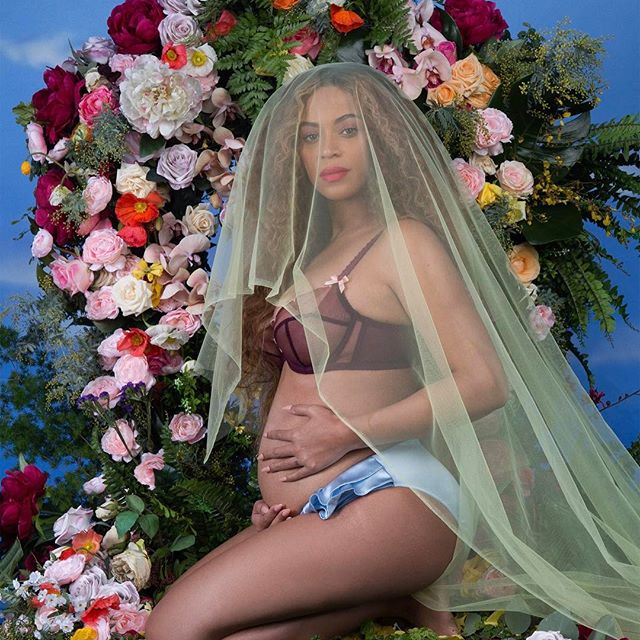 Modern Royal – Beyoncé went to Instagram to announce her pregnancy with twins…without actually using those words. She posted a photo proudly presenting her baby bump and the caption read:

We would like to share our love and happiness. We have been blessed two times over. We are incredibly grateful that our family will be growing by two, and we thank you for your well wishes.    The Carters

Shortly after posting the IG announcement that nearly brought thousands of views/likes/comments within just minutes, the same thing was published on her website and with an added “I HAVE THREE HEARTS.”

Also published to her site (which apparently keeps disappearing) is her pregnancy photoshoot. Many of the photos show her under-water, which isn’t a surprise, because that’s just what Beyoncé can do. Other photos were highlighting her first child, Blue Ivy Carter, where the 5 year old is seen “kissing” Bey’s belly. She is apparently very excited to become a big sister to the twins.

Jay Z has yet to post on his own social media, about their wonderful news, but he’s probably just still overwhelmed with joy at becoming a dad for the second and third time.

We’ve seen a lot of adorable moments between 47 year old Jay Z and 35 year old Bey, as well. Such as, that Instagram photo he posted of her in 2016, with him in the background mirror. The internet seems to lose their minds over this couple a lot!

Those two are still Crazy In Love. With two more babies on the way, it will no doubt bring even cuter moments and photoshoots, too!