Americans Stay Strong – Even in the Face of Nukes!

Home Reality Check: A Better View of Life in America Americans Stay Strong – Even in the Face of Nukes! 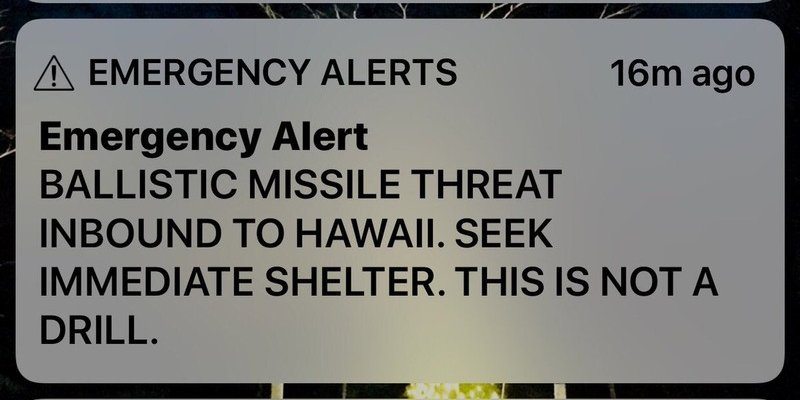 Americans Stay Strong – Even in the Face of Nukes!

Last week Hawaiians believed they were under attack from an incoming nuclear ballistic missile. And many thought they only had minutes to live.

But did the entire state’s population panic, jumping off buildings and sacrificing their young to shield them from the pain and suffering of the fallout?

Nope. In fact, they reached out to their neighbors, their families and their friends to inform them, to tell others in the mainland they loved them. Then they took shelter in the best ways they could to protect themselves and others. And they prayed for the best.

All in all, the behavior of a pretty civilized, empowered and reasonable society, wouldn’t you say? Way to go Hawaii – and America.

By now you have all heard, read or maybe even seen the terrifying text message alert that went out at 8:08 Hawaii Time on Saturday January 13th that read, “BALLISTIC MISSILE THREAT INBOUND TO HAWAII. SEEK IMMEDIATE SHELTER. THIS IS NOT A DRILL.”

It was a harrowing 38 minutes before another alert was sent out officially announcing that there was in fact no real threat, and that the warning was a heinous error.

But during that time pretty much EVERYONE in Hawaii, the media included, thought that they were in fact under attack and could quite potentially kiss their life goodbye.

In those 38 minutes, people in Hawaii, fearing for their lives, sought shelter and contacted their loved ones. But there was no real mass hysteria, no looting, or even a rash of auto accidents or irrational behavior.

In fact, just the opposite occurred. People reached out to help others. Many people who were driving on the street pulled over to warn and help pedestrians. And when those in the know found out that the warning was a mistake, they took it upon themselves to tell everyone they knew in whatever way they could since the official channels weren’t doing a very good job of getting the word out.

Now the inexcusable and horrendous mistake of a false missile warning notwithstanding, I would say such a measured reaction is a sign of a pretty civilized and inspired community of people. That’s probably why the few articles that have been written about this can’t really beat up much more of a story.

OK, you may think that’s it’s not that big of a deal that nobody committed suicide or looted or killed their children. But the truth is that the calm, the control, and the solidarity that Americans have consistently displayed in the face of fright and danger since the founding of this nation is laudable and enduring.

Whether it was the way the colonies came together to become a nation in the face of the overwhelming might of the British army and navy, or the way we overachieved our way to helping end World Wars I and II. Or the way we endured and persevered dozens and dozens of what could have been utterly catastrophic situations – the bloody and politically confusing Korean and Vietnam Conflicts, the rioting of the ’60s and the ’70s, the terrorist attacks that began in the ’90s and culminated in the 9/11 attacks.

And then there were the scores of senseless bombings, mass shootings and other senseless acts of violence that occurred more notably over the last several decades, not to mention the ongoing and unavoidable natural disasters which have and always will occur.

Throw in to the mix some downright disagreeable political leaders over the years who all of us at one point or another probably thought could be the end of us, and you can only come have to one conclusion.

This nation is damned strong and we are here to stay.

Now quite obviously a nuclear attack on this nation is an unfathomable nightmare to be sure, and one that I certainly don’t even want to see how we would respond to.

But I truly believe the people of this nation might overcome even something as dire as that. Because ultimately we have each other, and the bond that we all share – that we, or our ancestors, came here with a dream of life, liberty and the pursuit of happiness.

And when it comes to making that dream happen maybe it is best to recall the words of Winston Churchill after World War II, who said, “Now this is not the end. It is not even the beginning of the end. But it is, perhaps, the end of the beginning.”