Football Is Problematic, but Not Because of #TakeTheKnee

Home Culture Football Is Problematic, but Not Because of #TakeTheKnee 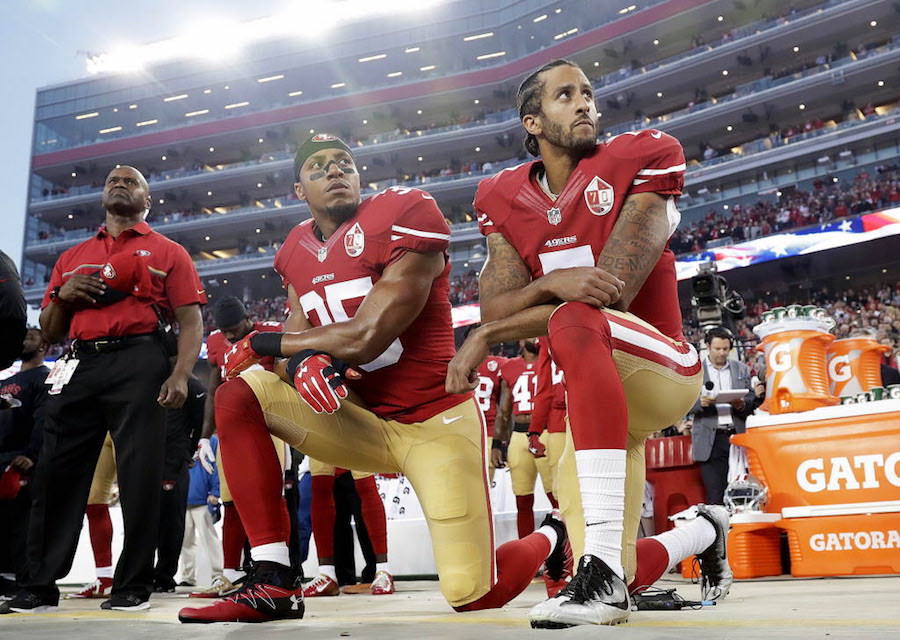 Football Is Problematic, but Not Because of #TakeTheKnee

Man, I love football. I love the grit and the effort and the sheer spectacle of it. In fact, I’m watching the Atlanta Falcons play the Detroit Lions as I write this.

I remember the first time I sat down and watched a football game from start to finish. It was in the dorms my first semester of college. I was seventeen. Auburn was playing, but I don’t remember against whom.

I mostly sat down that afternoon to watch because I was flirting with a boy. He played with my ponytail through the second half. Nothing ever happened with him, but that game changed the course of fall weekends for the rest of my life.

And the Game Went On

I’ll be the first to admit that football is problematic. It’s rough and violent. Some people think it’s boring. Injuries, up to and including permanent brain damage, are common.

Others say that football is a proxy for aggressive nationalism, pitting one team against another in a collective struggle that is zero-sum. Or maybe football is the safety valve, the contest that absorbs normal tribal instincts and turns them into innocent commercial entertainment.

And none of that high theory includes the off-field behavior of the players. Indeed, the NFL has weathered its fair share of scandals.

Michael Vick used to be a quarterback for the Falcons. He is widely regarded as one of the best quarterbacks to have played the game, and, with his mad rushing skills, is credited with changing the way the position is played. He was selected to three Pro Bowls. He was also arrested and jailed for 21 months for his involvement in a dogfighting ring. After he got out, he was picked up by the Philadelphia Eagles. And the game went on.

Joe Mixon, who played his college ball for Oklahoma, was caught on video punching a woman in the face at a bar. He was then drafted by the Cincinnati Bengals and still plays there. Ray Rice. Adrian Peterson. Ben Roethlisberger. In point of fact, there have been at least 44 different players who have been accused of physical or sexual assault in the last few years. Some were suspended for a few games. A couple were let go. Most were not particularly punished. And the game went on.

Investigation has shown that many NFL teams have been violating federal laws when it comes to narcotic painkiller prescriptions. Considering all the attention that this country’s opioid epidemic has been getting, I’m a little surprised I didn’t know about that until I started researching for this article. In fact, the NFL seems perfectly content to quietly allow drug and alcohol abuse in its ranks just so long as those indulging don’t do anything embarrassing on camera, which is where JaMarcus Russell and Johnny Manziel went wrong. And the game went on.

Then we come to what is, to me, the most devastating scandal of all: CTE. CTE stands for chronic traumatic encephalopathy and is the result of the repeated impacts to the head that football players sustain. It’s a form of brain damage, and symptoms can range in severity from simple headaches to violent impulses and suicidality. Of course, CTE is found in players of other contact sports like rugby, ice hockey, and boxing, too. But it’s been alleged that the NFL knew about the prevalence and negative effects of CTE and did nothing to warn players, even to the point that in 2013, a group of former players won a $765 million settlement against the league. But the game went on.

Then, in 2016, Colin Kaepernick, then quarterback for the San Francisco 49ers, took a knee during the pre-game playing of the national anthem, and it felt like the entire country lost its collective mind.

“How dare you?” people cried. “People fought and died for this country, and you damn well better stand during the anthem!”

By way of explanation, Kaepernick said, “I am not going to stand up to show pride in a flag for a country that oppresses black people and people of color. To me, this is bigger than football and it would be selfish on my part to look the other way. There are bodies in the street and people getting paid leave and getting away with murder.”

He was referring to the events that led to the Black Lives Matter movement. In solidarity, several other athletes in various sports also began either taking a knee or raising a fist during the national anthem. Opinions about Kaepernick’s actions were sharply split with very little lying between abject outrage and strong support. Those divisions appeared largely along racial lines.

After the 2016 season, Kaepernick became a free agent and he’s yet to be picked up by another team. Ostensibly, this is because his performance had been declining, though it’s not difficult to imagine that his very visible protest had something to do with it.

And that might have been that, but for Donald Trump. On September 22, for some reason, at a speech in Alabama, the president said, “Wouldn’t you love to see one of these NFL owners, when somebody disrespects our flag, to say, ‘Get that son of a bitch off the field right now. Out. He’s fired. He’s fired!’”

He later called for fans to boycott teams that didn’t fire those who “disrespect the flag.”

This led to some heated responses. And this does have some pretty troubling implications. The President of the United States is calling those who peacefully exercise their First Amendment rights sons of bitches and asking that they be fired. That’s a problem.

As anyone paying any reasonable amount of attention to the political dynamic in the country might have predicted, the reaction from many members of the NFL was not exactly what Trump was looking for. The statements issued by team owners were mixed, but most agreed that the president’s comments were divisive, not unifying.

The players themselves were less diplomatic. Many — more than ever, in fact — have been taking a knee during the anthem. A major league baseball player showed solidarity by taking the knee. The entire Pittsburgh Steelers, Tennessee Titans, and Seattle Seahawks teams elected to simply stay in the locker room for the anthem. Even Rico Lavelle, who sang the anthem before the Falcons v. Lions game, took a knee and raised a fist when he was finished. #TakeTheKnee is trending on Twitter. This has officially become A Thing.

Once again, people are so angry. I’ve seen people on social media call the people who choose to kneel the c-word, making the same tired argument about people fighting and dying. They are claiming to be “done” with the NFL and will no longer watch it or buy any of their merchandise. This is their hill to die on.

So, the rampant drug use, physical and sexual violence, animal abuse, and widespread brain damage were fine, but the peaceful exercise of free speech is not? Duly noted, guys.

Don’t get me wrong, if you want to be done with the NFL and boycott them, fine. That’s your right. But that this is the last straw says more about you than it does about football.

Football in general, and the NFL in particular, is far from perfect. I admit that. And I do struggle with my supporting through viewership of the problems I listed above. But players kneeling during the national anthem is far from the worst thing done by the members of the league. And if you can’t handle people doing something you disagree with, the problem is not the NFL.