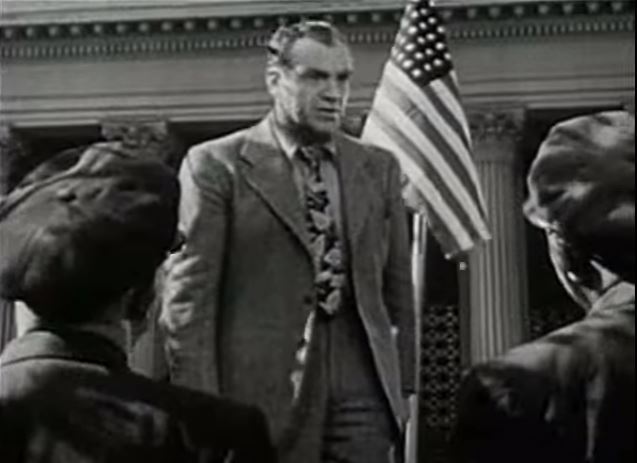 The same day neo-Nazis and antifascists clashed in Charlottesville, Michael Oman-Reagan shared on Twitter a 1940s short-film titled “Don’t Be A Sucker.”

The film, produced by the U.S. War Department in 1943, depicts an ornery bigot on a soap box seeking to enlist fellow Americans to his cause while denouncing Catholics, blacks, immigrants, and other groups.

Oman-Reagan, a Canadian employed by Memorial University of Newfoundland, does not have an enormous following on Twitter—25,000 or so people—but as of Friday his tweet had been retweeted more than 163,000 times and liked by 232,600 people.

1947 anti-fascist video made by US military to teach citizens how to avoid falling for people like Trump is relevant again. pic.twitter.com/vkTDD1Tplh

The clip above will be familiar to many, I suspect. It’s a segment I know I’ve seen before, even though I can’t quite remember where (perhaps in elementary school?).

The film is quite well done (it has a rating of 7.4 on IMDB) even though it is clearly a piece of propaganda, one designed to teach Americans citizens how to see through demagogues and race hustlers.

The clip above features an archetype modern Americans are quite familiar with—the angry white bigot (think Lee Cobb in 12 Angry Men). The voice of wisdom is a kind, elderly gentleman from Hungary who speaks to a young American after the bigot’s rant is concluded.

Their conversation ensues after the American, who had been listening to the bigot with general approval, expressed shock to hear Freemasons on the bigot’s list of unsavories.

“What’s wrong with the masons, I’m a mason,” he says. “Hey, that fella is talking about me.”

“And that makes a difference, doesn’t it?” the Hungarian man asks.

“I have seen what this kind of talk can do—I saw it in Berlin. I was a professor at the university. I heard the same words we have heard today. But I was a fool then. I thought Nazis were crazy people, stupid fanatics. Unfortunately it was not so.

You see, they knew they were not strong enough to conquer a unified country, so they split Germany into small groups. They used prejudice as a practical weapon to cripple the nation.”

These last words are very important. Ask yourself: Who today uses prejudice, envy, and grievance to divide Americans?

The obvious answer is precisely what Oman-Reagan tweeted (“people like Trump”). He has a point, but I also maintain that one finds this divisiveness not only in the language of the alt-right and in the immigration speeches of Donald Trump.

Gender and racial division are the centerpiece of cultural Marxism. It’s baked into the cake of modern identity politics, which teaches Americans to view one another not as individuals but as people of separate tribes.

It’s a different form of fascism, one many people have difficulty recognizing because they’ve been trained to identify fascism solely with the archetype in the short film.

Like the gullible American Everyman in the video, many people will simply nod along to the corrosive rhetoric until they realize, “Hey, that fella is talking about me.”

This column originally appeared at Intellectual Takeout and is reprinted by permission.