Being Earnest About Socialism

Home Culture Being Earnest About Socialism 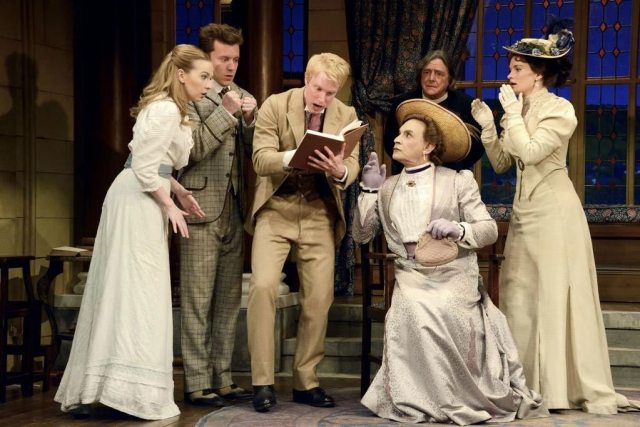 Being Earnest About Socialism

Humor as a medium tends to have a short shelf life. Things that made people roar in laughter in the 1950s tend to strike us as lame today. I can watch humorous films from the 1930s and sit there stone-faced the entire time. A literature expert will point out a joke in some medieval text and it is completely lost on me.

A huge exception here is Oscar Wilde’s incredibly funny The Importance of Being Earnest. I’ve read it so many times that I have whole sections memorized, and I could read it again now and still laugh and laugh. The two film versions I know are so hilarious that I have to watch with the pause button nearby else I will miss the next line.

It is so dry, so absurd, so circuitously complex, so poignantly self-critiquing of an entire class of people who once ruled the day but are nearly extinguished now. Watching it again, it struck me that this is precisely why it is funny now and was just as funny when it was first performed in 1895: it pokes fun at the presumption we all have over fixed class categories.

It’s common to say that this play has no meaning, like a Seinfeldian play about nothing. This is absolutely untrue. Keep in mind that this was a time when socialism was all the rage. Marx had posited that class would forever be the main source of social division until we adopted his fancy system for abolishing class altogether. So fierce was class conflict that history itself had to take a leap into the unknown, the expropriators expropriated, a new human being created, many known institutions (family, religion, money, property) completely abolished.

But what if the categories of class themselves were not nearly as entrenched as culture would have us believe? What if you could ascend or descend according to small trivialities and accidents of information? What if, in the end, class distinctions are things that we construct as a shorthand but do not actually exist as some immutable feature of the world? In this case, the entire Marxian model comes into question.

Indeed it is entirely debunked. Wilde pokes fun at the upper class fear of revolution (“To be born, or at any rate bred, in a hand bag, whether it had handles or not, seems to me to display a contempt for the ordinary decencies of family life that reminds one of the worst excesses of the French Revolution” ~ Lady Bracknell) but the play also suggests that elites are merely playing roles, just as everyone else is, a threat only to those who acquiesce to their pomps.

If class is merely perception and social construction, and not really an intractable feature of the world, enacting a revolution against all known reality would seem rather risky. To be sure, Wilde was not a fan of capitalism as he understood the word, but he certainly had a libertarian spirit. His essay “Soul of Man Under Socialism” was a clever attempt to get socialists to believe in the form of liberty he believed in, which was all about choice and self-definition.

In Wilde’s view, if you don’t like the way classes interact, switch them up. Be aspirational. Invent a new version of yourself. Be a different person in the country vs. the city. Marry up. Marry down. Go to different restaurants or move to the other side of town. Learn to speak in a different way. Wear different clothing. A free society makes all of this possible, and it was this aspect of freedom that Wilde found most charming and intriguing. He was more interested in how people use their freedom than in creating political systems that create absolute results.

Now, you might say (or Marx might say): none of this is possible because class is all about access to resources (which means money). Here is where Wilde is truly hilarious: the upper classes as featured in the story brag about not having any money. The butler is unhappy that he hasn’t been paid. The bill collectors are always looming. They pass debts around like hot potatoes, always hoping that someone else will pay.

This can be a difficult thing to follow. This generation of elites was very concerned about how money making was mixing up “society” in ways that were radically reducing the status of lineage. Not having money is a way of broadcasting: my class status is not due to anything grubby like commercial dealings.

So what is this thing we call class, in Wilde’s time and our own? It is real but hard to pin down. It’s all about social signaling. And this, in turn, comes down to a tiny issue. In Importance, Jack Worthing wants to marry Gwendolen Fairfax, but her mother Lady Bracknell refuses on grounds that Jack cannot produce any relations with social standing; indeed, he seems to be an orphan. He then goes to work to discover the identity of his parents. In the course of events, Jack’s class status moves from high to low to high again based on nothing more than knowledge discovery of a point over which he has no control.

The story is called a satire, and it is a decent description. It is a satirical account of the herculean efforts of the late Victorian Age to preserve what growing freedom was rapidly destroying. Wilde saw the efforts as hilariously futile, because so much of what we regard as the class hierarchy is really passing and artificial.

To be sure, it was not always so. Ludwig von Mises wrote of the precapitalistic ages that the class of your birth was the class of your life. It was a stratum you occupied. There would never be a change.You could make no money. You could start no new enterprise. You could not ascend. Indeed, there was no such thing as progress as we now understand the term. Your life was static, a matter of surviving, not thriving.

Capitalism changed everything. It exposed our entrenched assumptions about class as largely a hoax. Peasants could wear the clothing of the nobles and clean up their brogues and pass themselves off as members of the aristocracy. As prosperity spread, the vast gulf that separated the rulers from the ruled began to evaporate. Everyone could eat well, live in a house, own a mirror and a mattress, and eat with utensils. Eventually, under capitalism, the poor would live better than the rich could imagine in precapitalistic times.

Importance reveals this in subtle and hilarious ways, and speaks to the great unspoken truth about the opponents of freedom. The upper classes never liked it, precisely because it threatened their unique position in the social order. In fact, this was the essence of what Wilde might have believed his socialism to be: an ideology that wanted the privileges of the well-to-do spread to absolutely every human soul.

It is said that Wilde’s play was insanely popular in his day (it was Murray Rothbard’s favorite!), and I can see why: it was a send up of the elites that wanted to freeze or rollback history – an affectionate one but it was still cutting and devastating. The message seems to be: we should live in a world in which we can all be what we want to be, with nothing standing in the way of the realization of our highest and best ideals. We are all artists, and our lives are the canvas.

The only rules: be charming, be humane, be smart, and never take yourself too seriously. This is what it means to be earnest.

This article was originally published on FEE.org. Read the original article.