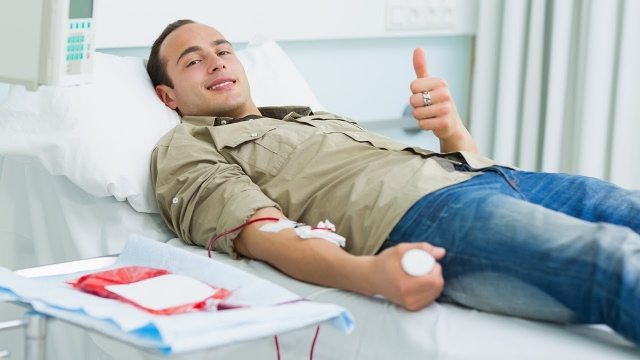 It is no secret that many Silicon Valley elites have a preoccupation with aging and longevity. They have bought into the notion that technology can do more than cure diseases; it can cure aging and possibly prevent death itself. They are the wealthy entrepreneur side of the transhumanist movement, and they are willing to try untested and exotic means to stave off death.

There is increasing interest in a rejuvenation technique based on the creepy science of parabiosis, or splicing together the circulatory systems of two animals to make them into synthetic conjoined twins, or, more accurately, symbionts.

In Greek mythology ambrosia was the drink of the gods. The word means “immortality”; the blood of those who drank it would turn into “ichor”, causing them to become immortal. Ambrosia is also the name of a company in California that is conducting a clinical trial to see if people over 35 display anti-aging benefits from blood transfusions using blood donated by teens and twenty-somethings.

Ambrosia’ s founder Jesse Karmazin says that his technique is based on parabiosis (a Greek word that means “living alongside”). One of the first parabiosis experiments took place in the early 1950s. A dentist attached two mice together so that they shared their circulatory systems. They were conjoined, so all of their movements and activities were the same, except for their diets. The dentist fed one mouse a sugar-filled diet and the other a non-sugar diet. He managed to prove that cavities are caused by diet, not by sugars in the blood.

Subsequent studies in the 1970s paired an older mouse with a younger mouse. The older mouse tended to heal faster, was more energetic, and its fur was healthier. Several experiments tried to figure out if the young mouse conferred anti-aging benefits to the older mouse. However, this line of inquiry had run its course and setbacks such as one mouse killing its conjoined partner and parabiosis disease, led to this research falling out of favor.

After the 2005 study, researchers have tried replicating these rejuvenating effects in humans. Since attaching two people together is not feasible, scientists tried blood transfusions between a young person and an old person. This is where Ambrosia (the company, that is) comes in.

What Jesse Karmazin’s company is doing is not parabiosis, but the topic is just creepy enough and the mouse studies are just compelling enough, that he has convinced people to pay money to receive periodic blood transfusions. And, he is touting it as a clinical trial to see if it confers anti-aging benefits.

A satirical look at Silicon Valley’s obsession with immortality

There are several areas of concern with this experiment:

First, mouse models do not always translate to humans. Mice are good models for investigating initial questions, but they become less relevant when it comes to real-world applications.

Second, even in mouse models, transfusions do not work as well as splicing two mice together. In studies conducted by some members of the group that published parabiosis studies in 2005, older mice were given regular blood transfusions from young mice, but there was no difference in certain age markers. Young mice had slower cell regeneration when transfused with old blood. The researchers speculate that old blood has proteins that inhibit stem cell growth rather than young blood having any anti-aging properties.

Another option may be that old blood needed to be filtered through young kidneys. Both of these would mean that blood transfusions would not be very helpful for anti-aging.

Third, Ambrosia’s clinical trial may not prove anything. Ambrosia charges people over 35 US$8,000 to be a part of their clinical trial. Typically studies have a placebo arm as a control, but this study doesn’t. As Karmazin pointed out, it’s difficult to get people to pay $8,000 if they might get a placebo. Instead, participants have certain biomarkers monitored for signs of reversed aging. The problem is these biomarkers are not definitive markers for aging.

Fourth, Ambrosia purchases their youthful blood from blood banks. Blood banks sell a portion of the blood that they collect to researchers as a way to defer the cost of running the blood donation center. While most people sign a consent form allowing for their blood to be used for research purposes, few people would like their donation used for Silicon Valley’s quest to enhance their lives.

The most pressing question in all of this is: Why are people paying thousands of dollars for what amounts to several blood transfusions?

Most of the Silicon Valley elites who have an obsession with immortality encountered death at a young age. Several that lost a parent or had a near-death experience. We can’t fault someone for fearing death. We all contend with our mortality, but not all of us believe we will live forever.

She recounts the story of Odysseus turning down Calypso’s offer to become a god. Calypso offered him a life in which he would be forever young and never die. But he turns her down for a life in which he will age, and wishes to spend his life with a woman who may die before he does.

Nussbaum says that the person who aims to live a godlike life in which he transcends his humanity is no longer a hostage to fortune. He is fully self-sufficient and has nothing to fear, nothing to grieve for, but also no one to love in the sense that love is a risk that will inevitably involve loss. It is the dull life of a god that Odysseus turned down.

The Silicon Valley elites’ experiments with anti-aging are an attempt to do away with those very things that even they cannot control—aging, disease, and death. It is the same sentiment we see played out over and over in transhumanist writings. The reality is, no amount of calorie restriction, vegan diets, human growth hormone, blood transfusions, or hyperbaric chambers can keep the Grim Reaper from knocking on the door. If he can come for someone like Steve Jobs, he can come for anybody.

Heather Zeiger is a freelance science writer with advanced degrees in chemistry and bioethics. She writes on the intersection of science, culture, and technology.  This essay originally appeared at Mercatornet.com, and is reprinted by permission.