Confessions of a Wall Street Insider 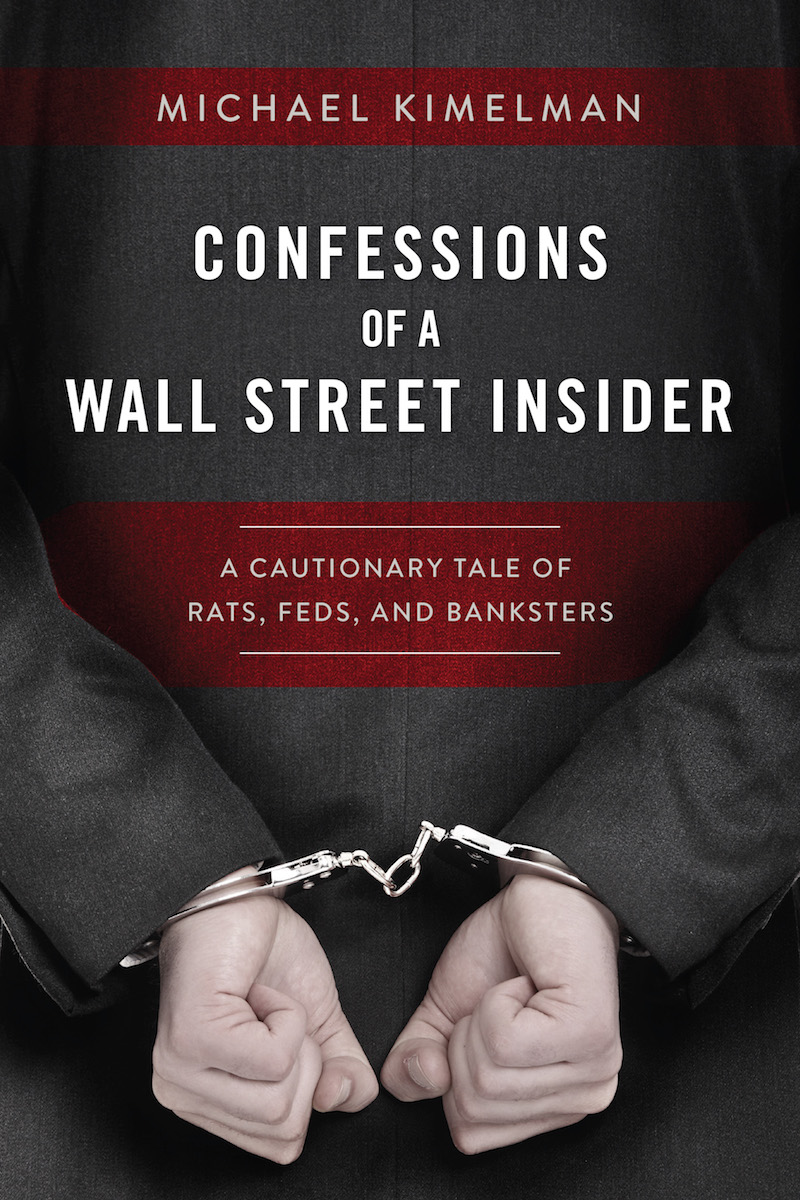 Confessions of a Wall Street Insider

This article is taken from the new book, Confessions of a Wall Street Insider, by Michael Kimmelman.

Before dawn, November 5, 2009, I was shaken from a deep sleep by a deaf­ening bang with no discernible source. I sat bolt upright in bed, heart in my throat. My first thought was that it must be some sort of mechanical explo­sion. Maybe that rebellious boiler in our basement had finally had too much. Within seconds, it came again. And then a third time. It became rhythmic.

I jumped out of bed.

Our front door was being beaten on. Or in. Given the intensity of the blows, it was hard for me to believe the hinges were still holding. I looked over and saw that my wife Lisa was also out of bed, white with fear and cradling our terrified toddler, Phineas. Still in the dazed throes of Ambien and red wine, I half-wondered if this wasn’t some sort of bizarre nightmare—the product of stress, drugs, and an overactive subconscious. An hour earlier, I had been floating in a warm nothingness, thanks largely to the sleep meds and several glasses of a mid-priced California Cab.

But now this. Whatever this was.

“Oh my God, Michael!” Lisa shouted, instinctively squeezing Phinnie a bit tighter than he was accustomed to. He squirmed uncomfortably. Lisa ran to the window and pulled back the curtain. There, we both saw half a dozen FBI agents in blue and yellow windbreakers fanning out across our front lawn. Each had a holstered firearm. One of them had a K-9 police dog, straining on its leash. I had been attacked by a German shepherd as a kid, and knew pre­cisely what they were capable of.

An avid viewer of shows like Law & Order and CSI: NY, Lisa initially fig­ured that the Feds were there to hunt down a violent criminal that might be fleeing through our neighborhood. That the FBI agents were there to somehow “help us.” But this wasn’t TV Land; it was Larchmont Village, New York, as quaint and safe a spot you can find within twenty minutes of the Big Apple. Escaped convicts didn’t haunt these mansions and manicured lawns. Lawyers and bankers did.

I was no expert, but it looked like the FBI agents were watching for move­ment in the windows and doors to our home. After a moment, an agent saw Lisa peeking out from behind the curtain and pointed at her face. Scared and confused, Lisa dropped the curtain and turned back to me.

“Go check on the kids!” she yelled, gripped by a shrill, pure panic.

I sprinted down the hallway and opened Cam’s door. Our three-year-old had just moved into his own bed. He was still scared of thunder, and my heart sank as I wondered how he would handle this sledgehammer-like crashing on the front of his home. He was wide awake and crying by the time I burst in.

“It’s okay, sweetie. Mommy will be here in second. You are safe.”

I quickly kissed him on his forehead. Five-year-old Sylvie was in the room adjacent. I checked on her next. She was starting to stir, but not yet upset. Only curious.

“It’s okay, Syl. Don’t worry about the noise. Try to go back to sleep.”

Then an absurdity. I thought to myself: Someone is knocking on my door. What do you do when someone knocks on your door? You go answer it.

“I’m going to answer the door,” I said to my wife, as calmly as if I antici­pated a delivery from Amazon or neighborhood kids selling Girl Scout cookies.

I began to walk downstairs. Through the windows of the house, I noticed several more FBI agents moving furtively across our backyard. The trees had lost enough foliage to leave the agents mostly exposed, but they were still try­ing their best to conceal themselves.

I reached the door and called out, “Okay, I’m opening it.”

I swallowed hard and prepared myself for an overzealous agent ramming the door into my face and shattering my nose, or maybe anxiously discharging a chambered round into my chest.

It wasn’t until my hands were fiddling with the brass deadbolt that I remembered I was standing in only my Hanes boxer briefs and a dingy V-neck undershirt. I had a quick flashback to the TV lounge in college, watching COPS with my buddies and asking, “Why do these white trash criminals always get arrested in their undershirts and slippers?”

Now, perhaps, it was no longer such a mystery.

Heart racing, ears ringing, I undid the last latch, twisted the handle and opened the door.

The agents were right out of Central Casting. Tall. Bulletproof vests. No-bullshit expressions. One was a middle-aged white guy, wearing the tradi­tional navy blue windbreaker with yellow FBI lettering. He was in good shape, and kept his hair meticulously short.

His young black partner was handsome and likewise athletic, and appeared to relish sternly shining his magnum flashlight directly into my eyes.

Squinting, trying reflexively to block the blinding beam with my hand, I said that that was indeed my name.

“I have a warrant here for your arrest,” one of them said.

I just stood there, blinking and squinting. In the movies, this is when the accused angrily demands to see the warrant, and then snatches it from the agent’s hands when it’s produced. But that’s the movies. In real life, your brain is like a car that won’t start. No matter how hard you pump the accelerator and twist the key in the ignition, there’s nothing. Three years of law school and several more at a fabled law firm, and all I could think of to say was: “Uh, for what?”

“Securities fraud. This warrant gives us permission to search your house. Please step aside, sir.”

It was too much to begin thinking about what decisions, or what people, had brought me here. But something in me knew. One word resounded in my brain. One word. Zvi. (It rhymed with “me” or “flea.”) One word over and over again.

So this was how you became one of the bad guys.

After regaining a semblance of composure, my first thought was that this was an incredible and outrageous invasion of my space. What about securities fraud could possibly give the FBI agents and a police attack dog the need to search my house full of children in the middle of the night? What the hell were they searching for, the fraudulent securities?

It made no sense, and I said something to that effect.

“The search is just standard procedure,” the white agent said. “We need to make sure there is no imminent danger.

The two agents brushed past me and entered my home.

The white one looked a little like a teacher I’d had in grade school, and the black one reminded me of a certain leading man from the movies. I silently dubbed them Teacher and Hollywood. They never gave me their names.

Teacher sidled up to me as Hollywood began to explore my house and turn on lights.

“So, I really hope you’ll agree to talk to us,” Teacher said, as he entered and began to look around. “This’ll be a hell of a lot easier on you, Mike, if you cooperate.”

Mike? Did he really just call me Mike? Hey, can I brew some coffee for you guys? Maybe you want a Danish or donut with that, since apparently you’re my new pals?

Before I could respond, several other agents and the dog were inside the house. I was actually relieved to get them off our lawn. Our four-bedroom home sat on a quarter of an acre at the top center of a “T” type block with very little privacy where one quiet street intersects another. The kind of place where, in a nation of pedophiles and serial killers, kids can still ride bicycles without fear and walk to each other’s houses or to the park alone. The parcels are mod­est and close together. A friend from Connecticut once told me that he could rake my lawn with a dinner fork. This close proximity meant that there were at least six homes with a direct line of sight of the heavily armed SWAT team that had now occupied my house. I didn’t know what the neighbors would think, but I knew it wouldn’t be good.

Published by Special Arrangement with Skyhorse Publishing. Confessions of a Wall Street Insider by Michael Kimmelman is available for purchase at Amazon, Barnes and Noble, or your local indie bookstore.