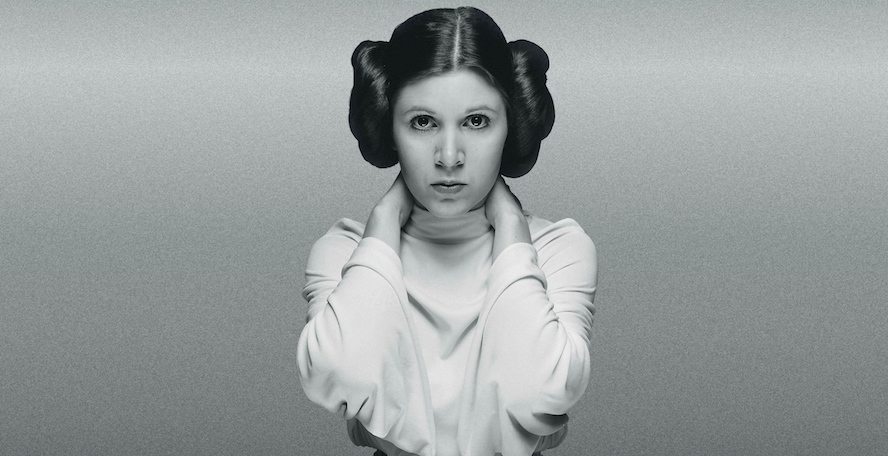 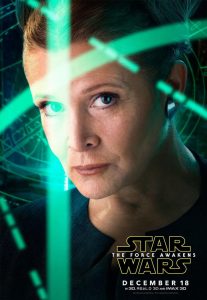 Princess Leia is definitely no shrinking damsel in distress, yet she embodies femininity.  There is never a question that she’s as powerful and intriguing as her male counterparts.  It makes the old posters with her low-cut and leg-bearing white sheaths laughable.  If that’s what moviegoers thought they were getting in the summer of 1977, they were duped by a Jedi mind trick from the marketing department.  The only thing Leia bares in Episode IV is her ample brain.

Leia is a twist on the classic fairytale princess waiting to be rescued; once the door to her “tower” is opened, she’s ready for action.  Because Lucas rooted his story so deeply in mythology, Leia had to be both.  Carrie Fisher brought a balance of strength and poise to her role. What could have been her weakest moment in a fan-boy metal bikini was a reprise of the first Death Star escape.  She waits for the opportune moment then uses her resourcefulness to win the day.  It’s that scrappy, witty demeanor that makes her endearing and her willingness to jump into any situation that makes her such a compelling character. 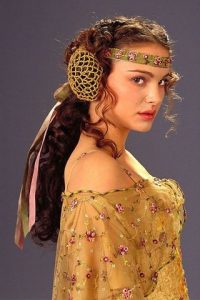 This is a powerful resume for what could have been one of the most inspiring female characters in sci-fi history.  Something about her soft grace that turns to an intelligent strategist and warrior makes you feel ready to take on an empire yourself.  Editing and poor dialog made for a heroine whose strongest moments were regulated to the cutting room floor.  Those who never watched Episode III with the cut scenes re-integrated never witness Padmé meeting with the most powerful people in what turned out to be the Rebel Alliance.  By the end of the episode, she’s reduced to a crying wife, wringing her hands as she paces the balcony for her husband to come home from a slaughter.  For one who saw everything about the crumbling Republic so clearly, she’s suddenly blinded by love.

Padmé is a flawed character to be sure, but it’s her indomitable strength that clearly passed on to her daughter Leia.  The mother of twins Luke and Leia, and wife of “The Chosen One,” she has been dwarfed by those to whom she gave her life.  But Padmé is deeply rooted in the line of powerful Star Wars heroines and rightly earns her place in the pantheon of sci-fi’s strongest women.    She deserved more. 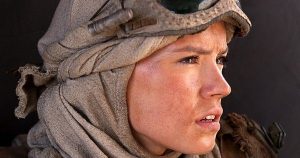 What’s so beautiful about Rey’s character is how unassuming she is.  This is what makes her completely different from the rest of the Star Wars heroines.  She is what makes Episode VII worth watching. The nearly dialog-free minutes when her character is introduced are some of the most powerful in the new film.

Rey’s dogged determination and unquenchable hope make her someone to emulate.  It’s pretty amazing that she maintains a positive outlook despite the fact that everything in her world is literally falling apart.  She’s also uniquely hands on.  She can take apart an engine, and cook a mean magic puff bread.  Sure the female mechanic isn’t unknown in sci-fi (Firefly, anyone?), but come on, it’s fun to see her mechanic the heck out of the Falcon.  I think Chewie was in love at first sight (Sorry Mala, but it’s been a long time).  (That’s a reference for my fellow supernerds out there. Holla!) (Although does that even count anymore since JJ removed the EU like the Emperor disbanded the Galactic Senate?)

It’ll be fun to see what Rey evolves into once she fully taps into her Jedi abilities.  That’s another tantalizing aspect of the Star Wars Universe to explore.  She’s the strongest female Jedi we’ve seen since…well that leads me to my next profile. 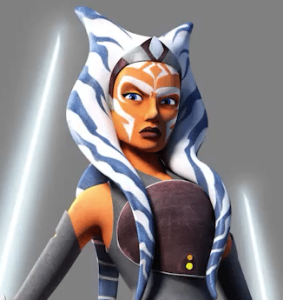 It doesn’t matter that she’s only CG, Ahsoka dominated the screen.  Voice actress Ashley Eckstein and character development dovetailed to create a fascinating female lead who could match the power and sass of Anakin Skywalker step for step.

What’s interesting if you look at the history of the Star Wars universe is that Ahsoka is a Twi’lek, a race that first came on screen as Jabba’s sexy green dancer.  Later, we saw more slave Twi’leks in Jabba’s palace, and finally, the original Twi’lek jedi Aayla Secura in Episode II.  Ahsoka became a more fleshed out character than Aayla, and her strange head appendages didn’t take away from her kick-butt fighting prowess.  Like her master, she wasn’t afraid to jump into a situation and figure it out as she went.  And thank God there was never a need for any sexual tension between the pair since Anakin was already with Padme.

Ahsoka is still a cult favorite among devoted fans, though the casual Star Wars enthusiast may not know her by name.  The character even transcended her story to become an empire of geeky clothing for women and girls.  After the popularity of her character in The Clone Wars, Ashley Eckstein saw a need for fan clothes that had style and flattered the feminine figure.  Thus was Her Universe born, filling the void of geeky clothes for girls who loved Star Wars as much as their male counterparts.  What started as a humble convention floor business (what Eskein called a t-shirt brand for Fangirls) is now a clothing line you can now find at Kohls and Hot Topic.  You go, girl.  And please have another sale soon. 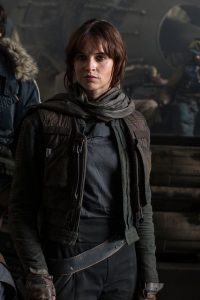 The latest edition to the Star Wars family, Jyn Erso fits in quite well among the strong galactic femmes.  The Rogue One heroine is scrappy like Leia, young and unassuming like Rey, but with a darker spirit all her own.  A bit more moody and rebellious than even trigger-happy Leia, Jyn carries a certain jaded outlook.  She’s the mythic refusal of the call to the point where she beats up her rescuers.  I’m not sure that’s what Homer and Joseph Campbell had in mind, but it shows right away she’s not a girl to be messed with.

Her tragic past makes her almost androgynous as she journeys single mindedly to pursue her own ends.  She wants to be in charge of her own future.  Yet, she has a deep and wounded heart that softens for the needs of others.  From when she saves a child amidst a gun-fight on an Empire-torn planet to the desperate need to finish what her father began, Jyn is a fiery spirit who doesn’t stop once she’s convinced of her cause.

We never see her hair neatly swept, nor do we see her romance a galactic bad boy, but Jyn’s feminine strength is her refusal to let the world be as it is, no matter what the cost is to her own life.  She is sacrificial.  That’s what is most beautiful about her.

For an unknown female character to carry an unknown stand-alone film was risky from the eyes of a producer.  But for the throng of women and certainly men who love the sci-fi galaxy far away, it’s a welcome role.  Fans embraced Jyn with open arms because she delivered; another powerful woman changing the galaxy and passing the torch to the ones yet to come.