Global warming has been a part of the global vernacular for more than 30 years, but in more recent decades, it has become a controversy of global proportions. Proponents on both sides have gone to great lengths to prove their side of the argument. Author Bjørn Lomborg wrote Cool It: The Skeptical Environmentalist’s Guide to Global Warming (2010) as a response to environmental activists who propagandize, exaggerate and use fear to create panic over climate risk. The book was so groundbreaking that it transformed the debate about global warming by offering a fresh perspective based on human needs as well as environmental concerns. Sundance Award-winning director Ondi Timoner filmed a documentary with the same name based on the book and following Lomborg for almost a year. (See details and trailer below.) 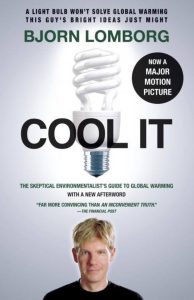 Lomborg is an adjunct professor at the Copenhagen Business School as well as President of the Copenhagen Consensus Center. He is the former director of the Danish government’s Environmental Assessment Institute (EAI) in Copenhagen who became internationally known for his best-selling and controversial book, The Skeptical Environmentalist (2001). He was named a Top 100 Global Thinker by Foreign Policy in 2011 and 2013 and as one of the 100 most influential people in the world by Time Magazine in 2004.

In his book Cool It, Lomborg exposes the fear-mongering for what it is and suggests a middle ground for dialogue (between extremism on both sides of the issue). He shows how many of the approaches being touted today will make future generations worse off and outlines the “coolest options” which will do the most good throughout the century. We need to move from “the feel good to the do good” solutions.

Lomborg punctures “the progressive agenda” by providing us with a more complete picture:

Lomborg is not a “climate change denier.” He believes that global warming is real and that humans are contributing to it. But he also believes that strong, ominous and immediate consequences of global warming are often widely exaggerated and will not result in good policy.

In Cool It he argues for simpler, smarter and more efficient solutions for global warming and the human condition, rather than pursuing drastic climate policies costing trillions of dollars which will have minimal impact.

Lomborg argues that we need to regain our perspective. There are many other issues which are much more important than global warming – hunger, poverty and disease. He asks, “Isn’t it our ultimate goal to improve quality of life in the environment with solutions that can help more people, at a lower cost, and with a much higher chance of success?”

In the book On Care for Our Common Home (Laudato Si’), Pope Francis appealed to “every person living on this planet” for an inclusive dialogue about how we are shaping the future of extremismour planet. Pope Francis called on the Church and the world to acknowledge all environmental challenges and to embark with hope and humility on a new path ensuring a common future for all.

Lomborg with Cool It makes a valued contribution in the spirit of the dialogue proposed by Pope Francis.

Cool It is based upon Lomborg’s book of the same name. Sundance Award-winning filmmaker Ondi Timoner travels the world with Lomborg exploring the real facts and true science of global warming and its impact. Climate catastrophe? The end of civilization as we know it?  Amidst the strong and polarized opinions within the global warming debate, Cool It follows Lomborg on his mission to bring the smartest solutions to climate change, environmental pollution, and other major problems in the world.
Available on Amazon, Hulu, Netflix and other streaming services.