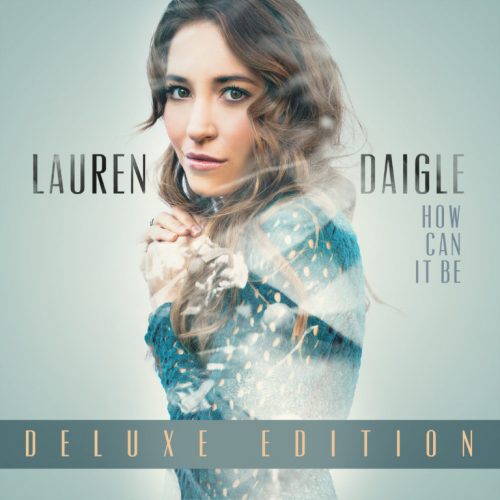 Lauren Daigle’s debut album How Can It Be (Centricity Music) has been nominated for a Grammy Award for Best Contemporary Christian Album. This comes in the wake of her huge success at the 47th Annual GMA (Gospel Music Association) Dove Awards held in Nashville this past October.

She received Dove Awards for Songwriter of the Year (Artist), Artist of the Year and Pop/Contemporary Song of the Year for “Trust in You.” And now, the artist hopes to win a Grammy in February, but admits that she sings for God and not for the awards.

“I want God to be speaking louder than the music,” she told Billboard.

Her calling to write and sing worship music was clarified during a difficult illness related to an immune deficiency that kept her out of high school for two years. This forced-solitude brought to light the importance of her childhood passion — singing.

Later she worked as a worship leader and had a brief stint on American Idol in 2012, but was cut after the first round in Las Vegas. She caught the attention of Centricity Music after singing on an EP with a local band and transitioned to Nashville.

Her first full-length project, How Can It Be, was produced by Paul Mabury (Hillsong, Brooke Fraser). After its release in May 2015 it spent six weeks at the top of the Christian charts and sold half a million copies.

“There’s a continuing theme on this record — trust,” says Daigle. “My heart’s cry is that people feel empowered as a body of Christ.”

In May of 2016 she released a deluxe version of her award-winning album, which features five additional tracks including a hauntingly beautiful acoustic version of “First.”

While How Can It Be is currently sitting pretty at the #3 spot on the Billboard Best Christian Albums Chart, the #2 spot is being held by her latest release Behold: A Christmas Collection.

Returning to her Louisiana roots, Behold has a distinctly classic jazz sound. Inspired by her love of New Orleans, she and collaborator Paul Mabury incorporated horns and saxophone into the music.

“I had a desire to create music with a sense of jazz history and I wanted to write and create music with a jazz edge to it,” Daigle tells Billboard. Her deep, soulful voice with its pop style provide the perfect modern complement to the jazzy instrumentation.

This Christmas season she’s been touring with For King & Country,  though the tour wraps up on December 18th in Arizona. A few appearances have been scheduled over the next few months but for the most part, she intends to takes some time off and seek out what God has for her next.

The primary thing she hopes listeners will take away from her music is love. How Can It Be is available on iTunes, Amazon and Google Play.

Behold, Christian music, Christmas music, Grammy Nominee, How Can It Be, Lauren Daigle