Valerian and the City of a Thousand Planets is the first in an obscure graphic novel series that’s been a favorite of visionary filmmaker Luc Besson since his childhood.  Now, the 5th Element director is adapting the story into the biggest film Europe’s ever produced: a CG laden epic with a budget of 180 million (figured in US dollars). 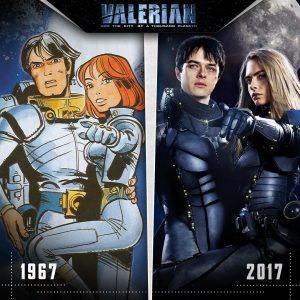 Why did I not know about this amazing sci-fi time-traveling comic story existed?  I feel ashamed. Just a glimpse at the trailer leaves me star-struck.    As a graphic novel series, this story lends itself to Besson’s sweeping visual style.  The trailer, fresh pressed, shows a tantalizing array of intergalactic settings with dream-like surrealism that makes Avatar look tame. 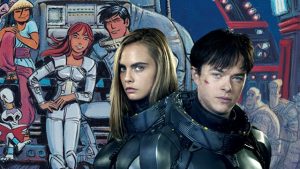 The film is based on the cult sci-fi graphic novel series Valérian and Laureline by Pierre Christin and Jean-Claude Mézières’, and centers on the adventures of two galactic cops with a fiery relationship.  One is a lusty playboy, the other a no nonsense heroine who continually halts the advances of her partner.  Sexual tension aside, the two have a great pairing and are trusted with the mission of saving a corrupt metropolis populated with nearly every species of life in the universe from political and social collapse. 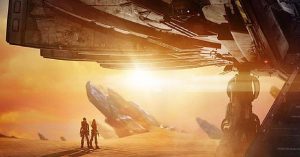 Another cloying story element is the third main character- a ship called the Intruder.  You can see it briefly in the trailer as the duo jump aboard its gang-plank to avoid enemy fire.  Not only is it imbued with a personality all its own, the Intruder can travel in time and space.  (The Doctor Who fan in me just leaped for joy to see a TARDISesque vessel in another context.) 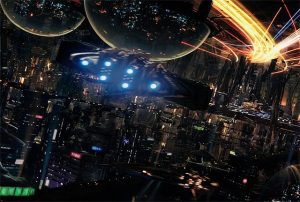 Thankfully, we only have to wait until July 2017 to see Besson’s colossal vision on the big screen.  I don’t normally drop the money for IMAX, but I may search the couch cushions for this one.  It’ll be a nice change to see a non-franchise, fresh storyline with beautiful imagery and strong characterization to match.  And now I have my reading list for the rest of the year.

Check out the trailer below and prepare to have your mind blown.