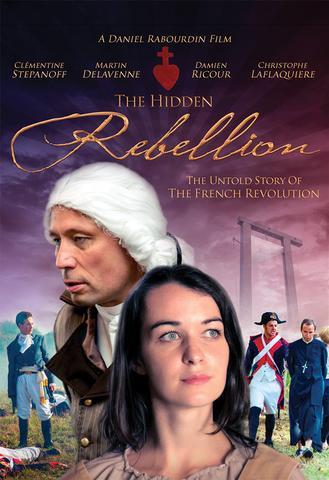 In 1789, the Catholic farmers of Vendée became a target of French Revolutionists. When they wouldn’t conform to the ideologies of the new government, they were forced to fight back to protect their religious and economic freedoms, but by the end of 1793 around 150,000 of them were murdered.

Why haven’t you heard of this before? The Daily Wire says, “Today, most historians, universities and media are products of the French Revolution, and deeply devout practitioners of its revolutionary religion of ‘Liberty, Equality and Fraternity’.”

That is why Daniel Rabourdin, French native and American citizen, felt called to produce the docudrama, The Hidden Rebellion, and bring the horrific truth to light. “French history books won’t even acknowledge the very community which Napoleon himself called a people of giants,” he says.

In an interview with Truth Revolt, Rabourdin says, “The French Revolution was hi-jacked. No longer were they simply about liberty, but extremists pushed an agenda of forced collectivism and atheism on the people. The Vendéans, whose faith was an integral part of their culture, were forced to abandon their religious practice and to worship nothing else but the goddess called Reason.”

The film shows the story from the perspective of a farming family, who inspire their fellow Vendéans to take up arms after their son’s throat is slit by Revolutionaries. Initially, the resistance does well, but greater and greater numbers are sent to purge the uprising until the Vendéans are overpowered.

150,000 men, women and children, including priests and nuns, were drowned, beheaded, or cast into early types of concentration camps. “[The Revolutionaries] experimented with gas, water poisoning, and scare tactics like the melting of bodies and using grease in their hospitals,” Rabourdin says.

Filmed on the land where the rebellion took place, the film utilizes 300 actors—some of whom are descendants from the original Vendéan rebels—to bring this intense action to life.

“The film moves smoothly from a fireside conversation with experts through searing drama to gripping action film,” says the Daily Wire.

Featured commentators include Stephane Courtois, former Maoist and author of The Black Book of Communism.