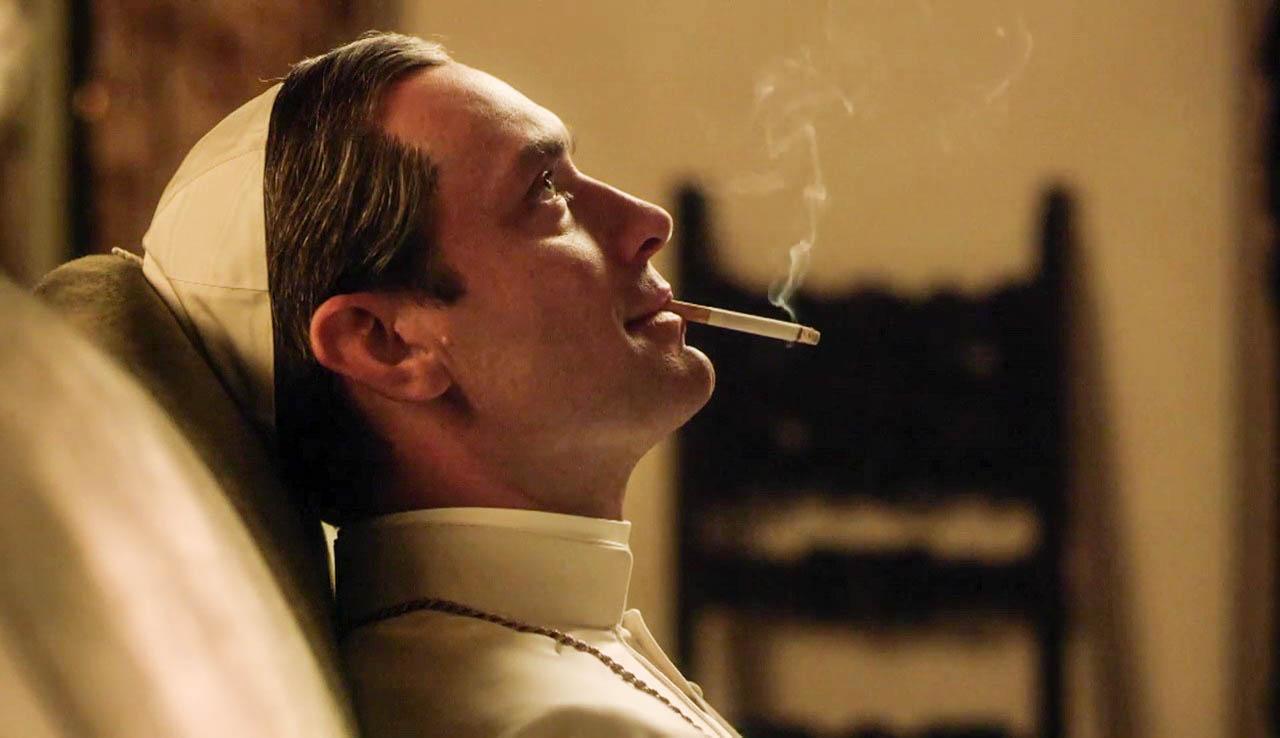 The world has a new American leader. He is controversial, without question. He differs from his predecessors in almost every way imaginable. Some find him frightening, while others find him inspiring. And everyone is bracing themselves for the wake of change that will be left by his deeds, words, and the reactions of the masses that he leads. He is, of course Pope Pius XIII, and he is The Young Pope coming to HBO in January.

For the first time in world history the Catholic church will be lead by an American. Abandoned by his parents when he was a boy, raised by a nun called Sister Mary (played by Academy Award winner Diane Keaton) and into a life as a priest, and mentored by one of the most powerful Catholics in America, Cardinal Michael Spencer (played by Academy Award nominee James Cromwell). And now, at the most recent conclave, Lenny Belardo (played by two-time Academy Award nominee Jude Law) has been installed as the new pope by the machinations of a shady backroom deal, ala House of Cardinals (see what I did there?) The hope of his chief enabler is that the newly named Pope Pius XIII will become a pliable pontiff.

But this pope is not anyone’s puppet, as he makes abundantly clear in his first official meeting with the Vatican’s Secretary of State, Cardinal Voiello, the man who who orchestrated the election of the new pope. Voiello tells the pope that his most important business to attend to is his inaugural homily to the masses at St. Peter’s Square. And oh, how convenient, I’ve even written the speech for you.

Not so fast, says the pope. I’m not interested in your speech. Instead, YOU make me a cup of coffee. And oh yeah, you see Sister Mary over there. She will be my top advisor, and she will be overseeing you as well.

Be Careful What You Wish For

Cardinal Voiello (played by Italian actor Silvio Orlando) got the man that he wanted in Belardo. However, it is quite clear from the outset that this will not be the pope he’d been scheming to install. Which naturally leads him to making it his mission in life to sink the new pope by blackmailing a woman into temping the pope into sin.

Pope Pius, for his part, is a unlike any the papacy has ever seen. He begins each morning with a Cherry Coke Zero, and finds the suggestion that a Diet Coke serves as an adequate replacement as heresy. He juggles oranges, openly struggles with his faith, and when telling a Vatican confidant how he prayed his way into the papacy, he blasphemies: “I love myself more than my neighbor, more than God. I believe only in myself. I am the Lord Omnipotent.” (When he is next alone Pope Pius prostates himself before God and asks for forgiveness.)

Made in Italy and it Shows

Writer, director, and creator Paolo Sorrentino (winner of the Academy Award for best foreign language film with The Great Beauty) is a mesmerizing story teller who described this project as “clear signs of God’s existence, clear signs of God’s absence, and how faith can be searched for and lost.”

A heavy load for a show to carry, to be sure. But these actors are at their absolute best. We all have known that Jude Law is a supremely talented actor, but this turn as Pope Pius XIII is a total triumph. He is fire and brimstone, when he finally does give his inaugural homily from the balcony overlooking St. Peter’s Square. He is positively charming, when he flirts with the young and attractive Prime Minister of Greenland. He is compassionate, when he comforts one of the nuns whose sister is dying many miles away. And he is coldly spiteful, when he believes that Sister Mary is trying to forge her own place of power inside his reign.

In case you can’t tell, I love this show. It is comedy, done right. It is dramatic, with the perfect combination of compelling characters and intriguing storylines. And Sorrentino’s direction is beautiful and stylish, and even though they did not do any filming in Vatican City, you would never know it from the way that Rome springs to life off the screen.

Sadly, it doesn’t premiere in the United States until January 15. But it is currently on in Europe, and based on the success it’s having there, a second season is already in development.

Make sure you mark your calendars, because this is more can’t miss television provided by a joint venture between HBO, Sky Atlantic, and Canal+. And if you do commit the sin of all sins and fail to watch The Young Pope, get yourself to a confessional.