Keeping an Eye on Shaun Roberts

Keeping an Eye on Shaun Roberts

Thirty year old Shaun Roberts was born in Lufkin, grew up in East Texas and is now an Assistant Professor and head of the painting program at Stephen F. Austin State University. Shaun’s paintings and drawings portray a part of life in East Texas unfamiliar to most of us. His work is tough, ambitious and thought-provoking. I am glad for the opportunity to introduce him to you.

Mary: How and when did you decide to be an artist?
Shaun: Growing up, I always loved the idea of being able to draw, and I admired talent. I never tried to make art after my early childhood years, because I believed talent was something you had to be born with, not something you had to work hard to achieve. It wasn’t until my senior year in high school that I discovered how wrong I was about that assumption, and that I could become an artist with some hard work.

People sometimes ask me about a tattoo on my forearm, and if I ever regret getting it. I have to say no, because it’s tied to my first attempts at drawing. The first drawing I ever made was a copy of it. After I saw that drawing was something I might be able to do, I never stopped. I became so obsessed with it, that I would lock myself in my bedroom for days just making drawings. 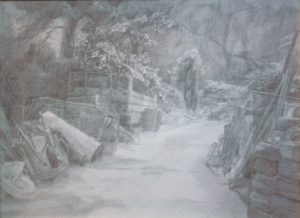 Mary: What is the first work of art that you can recall that you experienced as “art,” as something beyond what you normally see?
Shaun: When I was a freshman at Stephen F. Austin State University, I went on a study abroad trip to Italy where I lived in Florence for three weeks. It was during this time that I had the privilege to see so much great work that I had only seen in art history books. I remember being blown away by Caravaggio’s Head of Medusa painting. It was so much different seeing art in person than in a textbook or online. The work moved me, and lit a fire inside me to become a better artist.  Ever since that day, Caravaggio has been my favorite artist. I even did a 8ft x 8ft copy of his Martyrdom of Saint Mathew. I have had the privilege of seeing many of his paintings, and most of them have left me with a similar feeling of awe. 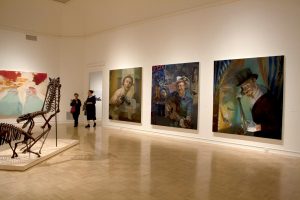 Shaun Roberts, Gallery View of Straight Shooter, Troubadour and Hornswoggler, Oil on canvas, each is 92”x86”, 2012

Mary: You have spoken of being influenced by Velazquez and Franz Halls as well. Are you drawn to anything in particular in their work?
Shaun: I’m drawn specifically to technical aspects of the work of Franz Halls. I like how he composed the figures in space and how they interact with each other. All of the people in his narratives seem to be carefree, full of spirit, and not minding that we are watching them.

Mary: Will you tell us a little about your process?
Shaun: I start with studies, take photos of my models, and as the idea evolves, take more photos. Later I make a light drawing on my canvas and wash in all the warm and cool tones. I move on to thicker paint, focusing first on the painting as a whole, and later focusing in on details.

I look back to the old masters, studying them for composition strategies, color schemes, and content. I often take an old theme and put it into contemporary context. In my painting, Card Sharps, I refer to the Caravaggio painting of that name as well as his Supper at Emmaus by placing the figure on the right in extreme perspective. For the facial expression of the male figure on the left, I looked at Franz Hal’s Young Man and Woman in an Inn.

Mary: Are those early studies as resolved as the drawings shown here? These drawings seem like individual works in themselves.

Shaun: These particular studies are meant to be finished artworks themselves. I do two different kinds of studies. Rough sketches help me gather ideas, while more finished and refined drawings help me explore ways to develop the idea. In the sword drawing Hornswoggler, I took my time to study how to use value in the painting before I committed to doing it. 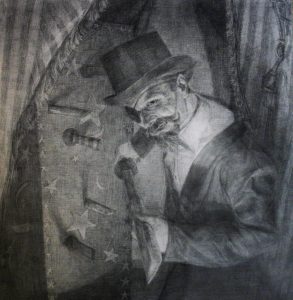 Mary: Do you use models? Are they family members or friends, and does your selection of them have any particular significance?
Shaun: My model is usually someone I know who is somewhat similar to the character I have in my mind. For example, in the painting, Card Sharps, the waitress/bartender was an actual bartender. Their poses are more natural and relaxed if they don’t have to act out of character.

Mary: And yet many of your works are self-portraits. Is this convenience or more deliberate?
Shaun: It’s a bit of both actually. Sometimes I want to do a self-portrait, but many times it’s just easier to use myself than instruct a model.
Mary: I love that you disguised yourself with a fake mustache for Hornswoggler. 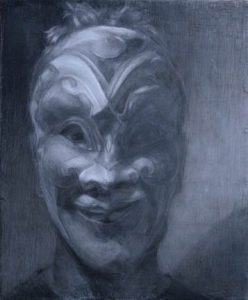 Mary: I sometimes wonder if for some of us, the incentive or pleasure of being an artist has a little to do with control. The world can be going crazy outside, but in my studio, I at least have the illusion of having a say over what happens on that small piece of paper. Have you ever thought about this?

Shaun: I think we all do this in some degree or other. It is nice to leave the chaos of the world to go into the calm center of the storm, so to speak, which is the studio.  I know it is a bit odd for me to word it like that since most of my paintings are full of chaos. But this chaos is different, because it is of my making, and I am in control.  It’s also an escape. I construct narratives and put the characters in their own little universe. Through the process of creating, I get to exist in that universe for a short time. 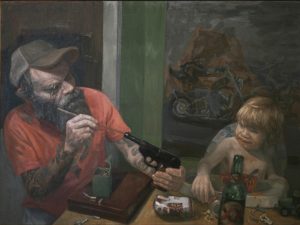 Mary: And yet that universe you create is not always so pleasant. There are some scary aspects to it, like in the painting of the magician with the sword or the card game with all the pistols. The world you depict is pretty rough. Can you tell us a little about why you depict this world? Is life scary?

Shaun: Life can be scary, and we all have been in uncomfortable situations. I like to put the viewer in a slightly uncomfortable place to bring tension to the artwork. At the same time I like to throw in humor to balance the scales. My characters are often irresponsible or unaware of the danger lurking beneath the comedic surface. 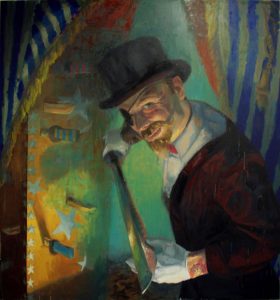 Mary: You have mentioned Flannery O’Connor and Eudora Welty. How have they influenced your work?
Shaun: At first, many of their short stories seem to be just down to earth Americana with everyday situations and characters. The stories draw you in, but as you grow close to these characters you start to realize there is something off, that things are not quite as they seem. There is always a element of potential danger within the stories or characters. I feel like I especially share this approach with Flannery O’Connor.

Mary: How do you want your viewer to respond to your work? I am thinking of both when they are standing in front of the painting, but also what they take away from it and how it lives in their memory.

Shaun: I used to want to bring a sense of unease or tension to the viewer, but now like the idea of people taking away different things. I have a wide audience. Some still feel uneasy but some relate to the paintings on a personal level and are full of joy and excitement when they see them. Both reactions are ok. 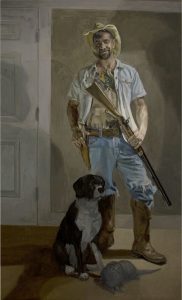 Mary: Are there any artists working today whose work you admire?

Shaun: I admire Kehinde Wiley, specifically the way he references art history in his artworks. One of my all time favorite artists is Antonio Lopez Garcia. I like his sensitive use of value and color. Because a lot of my art is very theatrical, I am also influenced by cinema. I look at the Coen brothers a lot.

Mary: Shaun, thanks so much for taking the time to talk with me. I am so glad to know you and look forward to seeing what you will be doing in the coming years.